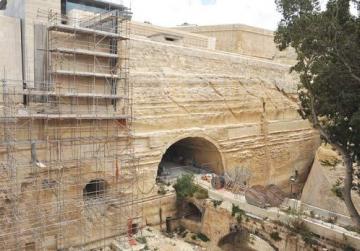 The government still cannot say how much the City Gate project will cost by its completion date, despite a delay of almost two years.

Asked to quantify the overruns, if any, a Transport and Infrastructure Ministry spokeswoman said these were still being calculated.

When announced, the Renzo Piano project – which includes a new entrance to the capital, a Parliament building and the rehabilitated old theatre site – was estimated to cost €80 million and was due for completion in 2012.

However, sources close to the project told Times of Malta the delay pushed the final costs up.

According to the government, the original budget did not cover components such as demolishing a building previously occupied by Bank of Valletta and an adjoining police station, which made way for a piazza.

It admitted there was no money left to transform the ditch surrounding Valletta into a public garden and it would have to find the funds if it decided to proceed.

Shortly after his appointment as minister responsible for the project, Joe Mizzi had said the government was scrapping the ditch plans to cut costs. Following criticism, particularly because the garden was seen as the only part of the project to be truly enjoyed by the public, it seems the government is reconsidering the idea.

The ministry’s spokeswoman said that while the infrastructural works at the ditch were completed, including the building of two underground water reservoirs to harvest rainwater for irrigation, the government was considering a new garden proposal by the Italian architect.

The government was also considering turning the space into a car park, the sources said.

Aimed at transforming Valletta entrance, the decision to go ahead was harshly criticised because of its costs, particularly by Labour.

Times of Malta has reported the government is expected to pay €6 million in fines over the delay. According to the government, the original deadlines were unrealistic and the new Parliament should be inaugurated in September.

Since January 2013 the government has been paying fines of €10,000 per day to Malita Investments, which owns the project’sfinancing arm, in connection with the delayed Parliament building.

The authorities played this fine down, saying it was a government to government transaction.