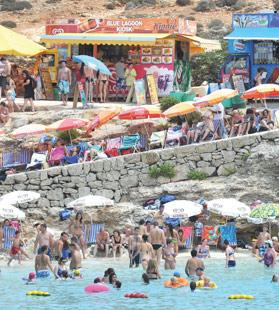 In 2011, hiring sunbeds and umbrellas on the beach in Comino opposite the Blue Lagoon was regulated. Photo: Chris Sant Fournier

The Malta Tourism Authority is not yet taking any action over the deckchairs and umbrellas on the Comino beach opposite the Blue Lagoon, but is monitoring the “complex situation”.

Every summer, hundreds of people flock to the Blue Lagoon but the small beach is usually occupied by deckchairs and umbrellas set up by operators, leaving no space for those who do not want to hire equipment.

By law, only 70 deckchairs can be set up, but the bay receives hundreds of bathers every day.

In 2009, planning authority officials raided the beach but the attendants, who were facing enforcement notices, were tipped off and gave them the slip.

They arrived ready to confiscate equipment but only found a few concrete umbrella bases.

After a search, they found more than 400 deckchairs and 100 umbrellas hidden behind walls and trees.

Two years later, sunbed and umbrella hire was regulated through a tender awarded by the authority.

Last September, the NTA was investigating whether the beach equipment was being kept within the permitted area.

Asked for the conclusions of this investigation, a Tourism Ministry spokesman said there was big demand from people to go to the Blue Lagoon, despite its limited size.

“The hiring of deckchairs and umbrellas in the Blue Lagoon area is legal through two tenders and other permits,” the spokesman said.

In the meantime, the MTA is monitoring the area but not taking any action.

The tenders provide for 70 units to be placed (when hired out) on the small, sandy beach and adjoining concrete areas.

Supply and demand are totally mismatched and 70 units to service some 2,000 to 3,000 day visitors does not tally, he added.

The area falls under the remit of several entities, including the Gozo and Tourism Ministries, Għajnsielem Local Council, the planning authority, the trade department, the police, Transport Malta and the Ports and Yachting Directorate.

Discussions to find a workable solution involving all stakeholders have been held and are still continuing.