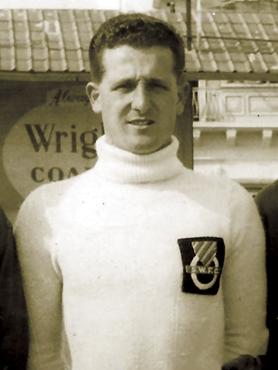 In 1946 he joined Sliema Wanderers’ minors as an inside-forward but one day, while playing for St Patrick’s School, he was asked to substitute the regular goalkeeper who was injured. Cosby did so well that from then on he never abandoned the no.1 position.

There is no doubt that Cosby was one of the best Maltese goalkeepers of the fifties and sixties. However, his climb to the top was not easy as he had the misfortune of always having to compete with other first-class goalkeepers.

Just when it seemed certain that he would graduate from the junior strings to the first team he found his way blocked by Sliema’s first choice goalkeeper, Lolly Rizzo.

Therefore, in the summer of 1952, he moved on loan to Birkirkara.

Those were prosperous days for the Stripes who, after winning the Second Division championship, took the First Division by storm and raced neck and neck with Floriana for the title.

Cosby was one of the mainstays of that fine Birkirkara side. The Stripes wanted him to stay but the next season he was recalled by the Wanderers.

Cosby kept his place in the team for the rest of the season but when it seemed that he had established himself as first-choice goalkeeper he decided to try his luck in the United Kingdom.

Cosby did not stay long in the UK but when he returned he found that his place between the Sliema posts had been taken over by Victor Scerri.

Back he went into the reserves but Cosby did not give up and when Scerri lost form, there was Cosby to take his place not only in the Wanderers’ team but also in the national team.

Cosby was a bold goalkeeper. He suffered injuries many times but not as bad as in 1958-59 when he was rushed to hospital after a bad knock. Luckily, the abdominal injury was not as serious as originally suspected and he was soon back for training with his team-mates.

However, he missed the vital Cassar Cup semi-final against Valletta which the Lilywhites won 3-0.

A few days later, Sliema had to face Valletta again, this time in the FA Trophy final.

The Blues were in a spot. They needed their first-team goalkeeper and Cosby ignoring his doctor’s warnings stepped in to lead his team to a famous victory over the champions.

In all, Cosby played 71 league games for Sliema, winning four championships, two FA Trophy medals and three times the Scicluna Cup. He was also picked to play for Malta in three international matches.

In 1968, Cosby obtained his licence as coach. His first job was with Żebbuġ Rangers with whom he served for three seasons as player-coach.