The procession of the resurrection originated and developed in the cities close to the Grand Harbour. The promotion of this cult may be attributed to the Greeks, who came here with the Knights of St John in 1530.

In Cospicua, this tradition dates back to the mid-18th century, where it was customary for a drummer and a fife player to pass through the streets of the city to announce the joyful news of Christ’s resurrection. Children accompanied these players while singing: “Tomm, tirli tomm, tirli tiera. Kristu Rxoxta bil-bandiera.”

The 12 lanterns decorating the statue suggest that the procession started early in the morning, presumably after the Pater Noster, at around 5am. In the late 18th century, Archbishop Vincenzo Labini tried to regulate the hours at which these processions were to leave the church. 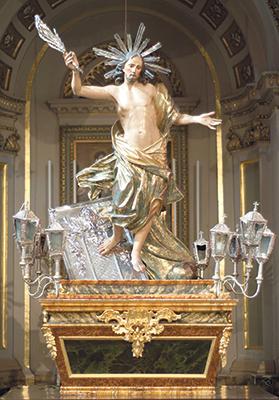 The 18th century statue of the Risen Christ. Photo courtesy of John Cassar

When the statue passed by, children asked the Risen Christ to bless their figolla: “Berikhieli Kristu Rxoxt.” Moreover, when the statue passed along the narrow streets, parents, standing in their balconies, used to let their toddlers touch the statue, so that Christ, victorious over death, would bless them. Cospicua has a strong tradition of carrying the statue at a run at certain specified spots on the processional route.

This custom was suppressed by the Regional Council presided over by Cardinal Alexis Lépicier in 1936. However, after World War II, the Bormliżi were the first to ignore this local Church law and reintroduced the custom.

Nowadays, the procession leaves Cospicua’s collegiate church at around 9am, after a solemn sung Mass, and re-enters after four hours. It is accompanied by fratelli, altar boys, members of the Collegiate Chapter and the St George’s Band playing Easter waltzes.

The climax of the procession is reached in Xgħajra (near the local council’s office). A huge crowd fills this enormous open area to see the traditional run with the statue. The procession also includes the blessing of children’s figollas and Easter eggs on the parvis of the monastery of the discalced Carmelite nuns.

The statue of the Risen Christ

The beautiful wooden statue of the Risen Christ is attributed to an anonymous Spanish sculptor. It was brought to Cospicua in 1714 and donated to the confraternity of the Holy Crucifix by its rector, Celestino Sacco. The statue represents the iconic moment when Christ rose from his tomb, holding a palm branch in his right hand. The present tombstone, designed by Abram Gatt, is made of silver and was donated by the Cospicuan boatmen in 1926. Made of wood, polychromed and gilded, the statue – which is 160cm tall – is kept in Cospicua parish church, dedicated to the Immaculate Conception of Our Lady.

Rev. Dr Jesmond Manicaro is the rector of the Resurrection chapel (tal-Erwieħ), Tarxien, and member of the Cospicua Collegiate Chapter. 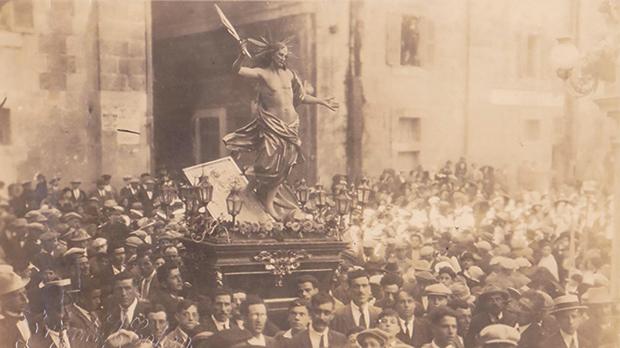