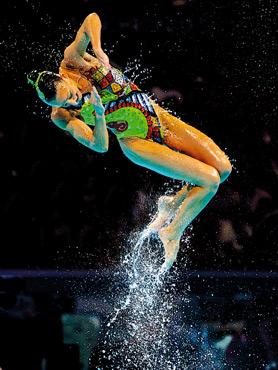 Former Japan Olympic Games winner Saho Harada looks forward to the day when her synchronised swimming students represent Malta at international competitions like the World Aquatics Championships, which this year were held in Barcelona.

Ms Harada, 30, came to Malta three years ago as a student to learn English and be able to communicate with participants at international competitions.

She soon realised there was potential for synchronised swimming and started her own class.

Most of her students are Maltese, and her class has grown from five children in 2010 to 70 students aged between seven and 18.

“Maltese children can dance and swim very well, and I wondered why there was no training in the sport. I realised there was no synchronised swimming coach on the island, so I started my own class,” Ms Harada, from Tokyo, told Times of Malta.

It was the first time they had participated in a competition abroad and competed with others who had been training for at least five years, Ms Harada said.

The next competitions for the Maltese team are the next Little Frog in Slovakia in October and the Flanders Cup in Belgium in December.

Ms Harada participated in the 2004 Olympic Games in Athens as part of the Japan team that won a silver medal.

Four years later she represented the country in the 2008 Olympics in Beijing, winning a bronze medal in the duet event.

She believes there is great potential and hopes her students will compete in the European and world championships.

The World Aquatics Championships include swimming, diving, open-water swimming, synchronised swimming and waterpolo sports. They are run by the Fédération Internationale de Natation, and all swimming events take place in a 50-metre pool.

The synchronised swimming competitions at this year’s World Aquatics Championships were held between July 20 and 27 at the Palau Sant Jordi, Barcelona, Spain.