In Samuel Beckett’s play Waiting for Godot, Estragon, trying to think of the most insulting thing he can call Vladimir, finally spits out “Crritic!”. Perhaps this is rather extreme but for many people the words ‘critic’ and ‘criticism’ continue to be seen as predominantly negative. In the arts, for instance, ‘criticism’ is sometimes implicitly cast against ‘creation’, upon which it is considered parasitic. What, in your view, is criticism and why do you think arts criticism in particular is important?

The line in Waiting for Godot always gets a laugh, partly because it’s a surprise and partly, I suspect, because the audience wants to show solidarity with the theatre makers. Everyone gangs up together against the enemy critic. It’s a paradox because the reputation of many plays, including Waiting for Godot, has been sustained with the help of critics. It’s likely that some people will even have bought tickets because of a critic’s recommendation. People are capable of reading critics and simultaneously regarding them as the enemy.

I wrote a chapter about fictional theatre critics in the recently published Theatre Criticism: Changing Landscapes (edited by Duska Radosavljevic) and the majority of portrayals I came across were negative. It’s a common perception that critics are bitter and twisted, not only in their work but also in their private lives. My own experience tells a different story but the belief is widespread.

One reason could be that the critic is like the sober person at a party. Everyone goes to arts events to have a good time and they don’t want anyone to burst their bubble. The critic wants to have a good time as well, of course, but it’s their job to scratch beneath the surface and to say, “That’s all very well, but...”. For the audiences who have enjoyed themselves and for the artists who’ve put in a lot of work, that can be difficult to hear.

But, yes, I do take issue with the negative view of criticism. For a start, just on a practical level, it’s not possible to do the job for very long unless you have a passion for the art form. If you were cynical about it, you’d be driven mad by the time it takes, the travelling involved and the disappointments along the way. To survive, you have to be a fan of the art form. 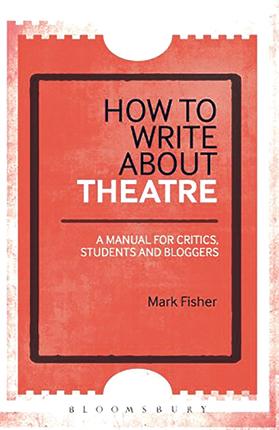 In any case, criticism is not all sniping and nitpicking. I like to think of it as a form of extended applause. It’s a way of thinking more deeply about an artwork, analysing what it means, where it fits, what it tells us about our lives. Criticism has many functions, ranging from “go see it/don’t go see it” consumer advice to philosophical enquiries into an artwork’s ideas or its political implications. It’s unhealthy for the arts to exist in a vacuum. Art exists to communicate with people and criticism is a consequence of that. It’s the discussion around the work. To quote Oscar Wilde, “There is only one thing in life worse than being talked about, and that is not being talked about”.

What motivated you to write your book How to Write about Theatre (2015) and how has it been received?

I’d never intended to write a book, but after I was asked to write The Edinburgh Fringe Survival Guide, I realised it was something I could do. Having finished that one, I found myself wondering what to write next – slightly to my own surprise. At the time, I’d started collecting anthologies of theatre reviews and tried to think of a way I could write about them. I didn’t think many people would be interested in all these old reviews, so I started thinking of something more practical – hence the title, How to Write About Theatre, and the chapter headings, ‘How to Find Your Voice’, ‘How to Write About Emotions’, etc. My cunning plan was to use my collection of reviews to illustrate the challenges critics still face today. I seem to have got away with it, because the book has been very well received – in fact, I’m slightly disappointed that a book about criticism has not been critically torn apart. Everyone seems to like it, so I really shouldn’t complain.

Criticism is not all sniping and nit-picking. I like to think of it as a form of extended applause. It’s a way of thinking more deeply about an artwork, analysing what it means, where it fits, what it tells us about our lives

What do you consider to be the main challenges of arts criticism?

Criticism is an act of translation. You’re translating what an artwork was like and what it made you think and feel into words. Your review can never give the full measure of the artwork (if it could, the artwork would be unnecessary) and it can only give an approximation of the way it affected you. It’s as slippery as describing a dream; you never get it quite right. The challenge is to get as close as you can. Because you can never get all the way there, it remains forever frustrating and forever worth trying.

Hard to answer this in a way that’s not biased, but I think there’s something about the live arts – and theatre chief among them – that is always about today, right now, in this room. There’s an immediacy about them that means they’re as much about what’s going on outside the room as inside. The audience, social interaction and society are locked into them. The outside world affects recorded art forms too, but less obviously, and I think that influences how they’re written about.

Having said that, I’ve just been on an arts review programme on Radio Scotland where we talked about a TV show, a novel and an album, and I would find it hard to argue that the critical method was significantly different between one and the other. You’re still trying to do justice to the artwork, trying to contextualise it and trying to explain the way you reacted to it. Specialist vocabulary can change (how do you describe the look of a sculpture or the sound of an orchestra?), but the fundamental job is the same.

Are there any relatively simple steps anyone can take to cultivate a more critical attitude to the arts?

Irving Wardle said, “Criticism begins with the word ‘because’”. There’s nothing special about having an opinion: we all have one about everything we see, hear or read. It may not be more than, “I liked it”, but it is an opinion nonetheless. To cultivate a more critical attitude you have to go one step further and ask yourself “Why? Why did I like it?”. It’s a simple question but it opens the door to so much more: evaluation, contextualisation, interpretation, analysis... Once you go down that route, the possibilities are endless.

How has the development of the internet, and the proliferation of blogs and social networking sites changed criticism? Are we witnessing a democratisation of criticism? Is this a good thing?

I think the internet is tremendously exciting and, yes, I think we are witnessing a democratisation of criticism. If you have a strong critical voice, you can now be widely read without the endorsement of a print publication. The potential is there for non-mainstream voices to be heard (in theory, at least). Also, although most online reviews follow a conventional pattern, there are significant examples of writers allowing the freedom of the internet to respond to the arts in fresh ways.

This is all good, but I have two caveats. The first is that some critics will always be more interesting to read than others. A right to speak isn’t a right to be listened to. Vast amounts are published every day and nobody could read it all. Readers gravitate to the best. So although there is greater equality of opportunity for critics, we’re not about to see the end of leading cultural commentators. The mix is changing but I don’t think we’ll totally lose the sense of a critical hierarchy.

The second caveat is to do with economics. Up till now, newspapers have made it possible to write criticism professionally. Most online writing is unpaid and, in the long term, it’s difficult to sustain criticism on an amateur basis. The London website West End Frame recently announced its closure after five years because, according to its editor Andrew Tomlins, the volume of work had begun to “take its toll”. A fully-funded publication would have improved working conditions or brought in a new editor, but not closed the whole thing down. That’s not good for developing critical skills and it’s not good for the arts. So I do think we need to be looking for new ways to keep criticism professional.

You will be visiting Malta in December for the first time, but what, from your experience, are the common challenges for the development of a culture of criticism in a relatively small community?

Critics do the job because they are enthusiasts for their chosen art form. Contrary to popular opinion, they want the artists to do well. In a small community, that is reinforced by a sense of local pride, the desire to see the home team do well. Even in big cities, arts communities tend to be close-knit – critics and artists inhabit the same spaces and get to know each other. That’s even more true in smaller places.

Put all of those things together – enthusiasm, pride and personal relationships – and there’s a real danger that critics degenerate into cheer leaders, blandly supporting everything and never being negative for fear of letting the side down or causing offence. While it is important to have a sense of the context in which the art has been produced, it helps no one to pretend that everything is good. Readers are misled and artists are not challenged. In an effort to be supportive, critics actually end up doing a disservice to the arts.

The challenge, then, is to find a way of writing respectfully but also honestly. It’s not easy and it may mean losing some friends along the way, but in the end, it will benefit the arciform and the cultural life of the community.

Besides meeting with local critics and reviewers, Fisher will be running a mini course for University students entitled How to Write about the Arts, and tomorrow he will be the keynote speaker at a public event at Spazju Kreattiv called ‘Reviewing the Arts’. This talk will also include questions and discussion from the floor, followed by a wine reception.
Those interested in attending should e-mail to fundinfo@artscouncilmalta.org.

Places will be allocated on a first-come first-served basis.