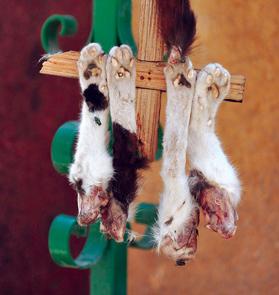 Four of the eight paws and a tail that were found nailed to two crosses hanging from the statue of St Mary in Britannia Square, Mosta, earlier this month. Photo: Chris Sant Fournier

The Mosta cat crucifier has been killing the animals and freezing their bodies before displaying them in a public space, according to police sources.

In one of the seven cat crucifixion cases, police established that the animal had been frozen, sources told The Sunday Times of Malta.

Police suspect that the cats were frozen in other cases – including the most recent one that took place on September 16.

Eight paws and a tail were found nailed to two crosses hanging from the statue of St Mary.

“It has become a major issue. It is bad publicity for our town and no one likes to see this type of thing happening,” she said, adding that the local council was working with police to help end the cruelty.

She said police had been monitoring the area all summer, when the killings stopped, and were investigating any potential leads.

Dr Farrugia said that the recent case – in which paws were nailed to crosses rather than a cat’s entire body – brought back memories of something that happened about three years ago in an area known as Blata L-Għolja in Mosta.

Back then, a woman found a cat with its four paws sawn off. The animal was taken to a vet and had to be put down.

“I always questioned what happened to the paws and this recent case brought back memories.

“So I alerted the police,” she said, adding that this might reinforce the police’s theory that the paws were frozen.

The Mosta animal killings started in 2011 when two dead puppies were found nailed on to crosses. Since then a total of nine animals, including seven cats, have been killed.

Most cases occurred in areas with religious connotations, near statues and churches, on the 15th or 16th of the month. The offender often left a note attached to the animals and in the 2011 dog killings the perpetrator said the suffering s/he had gone through was worse than the dogs’ pain.

Investigators initially followed a potential link between the first case and a 1999 murder because the house where the first puppy was found was where Franġisku Buhagiar, who is now in his 80s, had shot his sister dead following an argument over burnt toast.

The Malta Cat Club has created a reward fund to encourage people to be more vigilant and help catch the perpetrator.