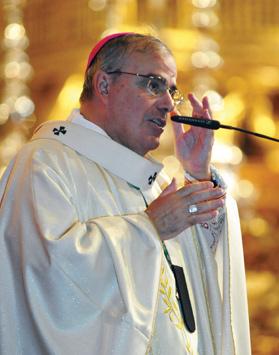 Oh… I see! Did it all start with some politician claiming that the local Church has been silenced? So here comes Mgr Charles Vella referring to the “horrific sound of silence” of the local Church with respect to the plight of the Iraqi Christians (The Sunday Times of Malta, August 17).

In fact, he was more specific and courageous when he recently wrote in Leħen is-Sewwa, comparing the deafening silence and lack of protests by the Maltese society in general and some specific organisations such as the Peace Lab, in particular, against various issues of injustice, and so on.

Now we have Fr Joe Borg, who as a result of finding his conscience is questioning the leadership of Archbishop Paul Cremona to ensure that the local Church becomes vibrant again and gets a “new lease of life”.

In last Monday’s Times of Malta, I read Kurt Sansone’s assessment of Fr Borg’s comparison between the Maltese Church’s leadership to the Nationalist Party’s demoralised state in 1976, as being loaded. Loaded it is.

So loaded that I need to get the following off my chest:

Vibrancy and a new lease of life will be delivered to the local Church not so much by its leadership, but by the authenticity and moral fibre of its members.

It will not be rendered vibrant and kicking if it resumes its ‘local mission’ of religio et patria and of allowing itself to be pulled one way or the other to the tune of some political group.

As I see it, over the past few years we have witnessed the crucifixion of Paul Cremona because he was not ready to play such a dirty game. His style may not be so ‘charismatic’ but that has nothing to do with the state of the local Church.

I have no doubt that Paul Cremona is authentic, while the other ‘self-grooming’ people dressed in black are not

If by the local Church we mean the authenticity of celebration of Mass in some of our villages and towns, or even that of the weekly Saturday Mass at the Peace Lab chapel in Ħal Far, then I see no problem.

You see, Fr Borg, authenticity is not delivered by good managerial practices or parish budgets. It is the direct result of love and understanding of whosoever is suffering or is on the margin of our society, because we choose to place him/her there in the first place.

If you have missed this point, then you have no business pontificating about Pope Francis. And I have repeatedly witnessed this vibrancy in some of our parishes or churches. Such as when a local centre run by sisters do ‘silent work’ and give new hope to prostitutes. Or when a Ukrainian bishop is invited to address the people attending mass at Ħal Far. This happened last Saturday.

The heat inside the church was stifling and overbearing. But each member of the audience was listening with care and empathy.

“Despite any of our differences, we are all a single people,” said the tall man dressed in white, with a flowing white beard.

And if you looked at his rough face, etched with experience, though still young… you would not doubt his sincerity.

Everyone wanted to meet this bishop immediately after Mass ended. And this is just to mention one case in point. A bishop from war-ridden Syria had also addressed the same people in the same church a couple of weeks ago.

To my mind, the Church of God is us. If we are authentic, the local Church will be. Leadership has nothing to do with it. I have no doubt that Paul Cremona is authentic, while the other ‘self-grooming’ people dressed in black are not.

Victor Axiak is the head of the Church Environment Commission.