He has signed a five-year deal.

As reported by the Times of Malta last Friday, the Citizens had stepped up their efforts to lure Borg back to their fold after the Malta defender had signalled his readiness to return to the BOV Premier League following the end of his one-year stint with Cypriot club Aris Limassol. 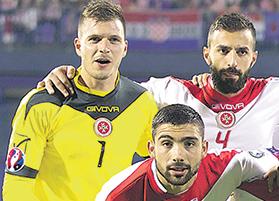 Paul Zammit, the Valletta coach whose admiration for Borg stretches back to the years when the latter was progressing through the youth ranks of Mosta, sees the signing of the towering centre-half as integral to his plans to strengthen his defence as well as his pool of Maltese players.

Borg, 28, has reportedly received a couple of proposals from overseas clubs, mainly from Cyprus, but these fell short of providing the kind of stability the defender is seeking at this stage of his career.

His decision to consider a move back to Maltese football inevitably alerted other clubs, especially Birkirkara who made an approach for Borg, but the prospect of rejoining the team where he enjoyed great success in his previous six-year spell, appears to have tipped the balance in Valletta’s favour.

A minor injury forced Borg, who has 19 Malta caps, to miss the national team’s friendly games against the Czech Republic (0-6) and Austria (1-2) but he has since completed his recovery.

Besides their interest in Borg, Valletta have also completed the signing of Argentine wing-back Leandro Darmian Aguirre. A product of Boca Juniors, Aguirre, 27, made his first appearance in a Valletta shirt in Gilbert Agius’s testimonial match on Saturday.

City coach Zammit has also moved to bolster his technical team with the addition of Godfrey Grima as second assistant coach.

The other first-team assistant coach is Agius.

Meanwhile, goalkeeper Andrew Hogg is still gauging his options amid reports of interest from clubs in the Netherlands and Greece.

Hogg will surely join a new club this summer following his acrimonious exit from Greek side AEL Kalloni earlier this year.

A host of Maltese clubs are keen to sign Hogg but he’s biding his time as his agents are also in contact with overseas teams that have shown an interest in the 31-year-old goalkeeper who has played 45 times for Malta.

Another Malta international who is still unsure where he will be plying his trade next season is Rowen Muscat. The Birkirkara midfielder, who turned 25 yesterday, spent the second half of last season on loan with Pavia but it’s not clear whether the Lega Pro club will take up the option to make his move permanent.

Technically, Muscat would remain a Birkirkara player if Pavia were to turn down the chance to sign him but sources told Times of Malta that the midfielder is still hoping to secure a move abroad.

If Muscat’s future is still up in the air, not the same can be said of his Birkirkara team-mate and captain Gareth Sciberras who has just signed a one-year contract extension with the Stripes.

Mansueto to join Miller at Hibernians

Birkirkara have yet to decide on their foreign line-up for the 2016/17 season as most of those who joined them in January are out of contract.

Josef Mansueto has stepped down from his post as Birkirkara assistant coach.

The former Qormi coach had joined the Stripes’ technical staff last summer to work alongside Giovanni Tedesco and stayed in his role when Croatian Drazen Besek replaced the Italian in December.

Widespread reports suggest that Mansueto has agreed a move to Hibernians to work as Mark Miller’s no.2, with the latter’s appointment as Branko Nisevic’s successor expected to be confirmed today.

Nisevic is to take charge of newly-promoted Gżira United.

Ħamrun Spartans, back in the top flight after a lapse of four years, are also engaged in efforts to assemble a competitive squad for next season.

The Spartans are reportedly in talks with a couple of foreign clubs who are interested in establishing a partnership with the former Malta champions.

Dr Farrugia Sacco was for many years the head of the Maltese Olympic Committee.