Trudging beneath the scorching sun up the steep slope connecting the Delphi Archaeological Museum to the actual archaeological site 200 metres up Mount Parnassus, Melisande Aquilina tried to convince herself that the eagle’s nest of ancient ruins she was about to admire was surely worth the effort. This was not hard to do, especially when confronted with the spectacular cliff-side panorama around her.

Nestled amidst pine forested hills and rocky crags, Delphi, which is a Unesco World Heritage, is situated on Mount Parnassus. It is a picturesque reminder of the flowering of Greek culture at its peak. It is the second most popular cultural touristic destination on the Greek mainland, after the Acropolis. The ancient sanctuary, perched on one of the largest mountainous regions of Greece, was famous for hundreds of years as the location of the supreme oracle of the ancient Mediterranean world.

The oracle, or seer, was considered to be a prophet of the gods, and the oracle at Delphi in particular was famed for being the mouthpiece through which the god Apollo made his will known. Apollo, the Greek and Roman god of the sun, was also the god of healing, music and prophecy, and he is tied to Delphi through a well-known legend which maintains that he once slew a giant serpent there. The serpent was called Python, and this is why all subsequent oracles at Delphi were called the Pythia. 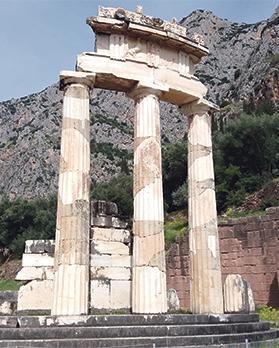 The Tholos of Athena.

I have always loved Greek mythology, and was thinking about this story, told to us at the Delphi Museum, when I suddenly started spying the remains of statuary and broken columns at the sides of the track. These are all that are left of the hundreds of sculptures and votive statues that many pilgrims and nobles dedicated to the god Apollo.

A number of ‘treasuries’, small buildings which held different offerings given by various cities around Greece, were also scattered along the so-termed ‘Sacred Way’, which is the main route through the sanctuary of Apollo. The most well-known of these, and the best preserved, is the Athenian Treasury, a marble monument built between 510 and 480 BC to commemorate the victory of an important battle.

Pink and yellow flowers adorned all that remained of the original Temple of Apollo further on up the Sacred Way. Although the temple was rebuilt three times, always on the same location, only the foundation and some columns are still to be seen today. These are supported by a platform made up of a sixth century BC polygonal wall carved with ancient inscriptions.

When visiting such sites I am always saddened by the thought that at the time when such marvels were constructed, the people obviously believed they would last forever. And yet, such a great temple, which originally boasted around 90 marble columns, not to mention various altars and adornments, couldn’t withstand the test of time.

Although the temple itself was pulled down in AD 390, when the Romans destroyed all pagan temples by decree following the onset of the Christian religion, the worship of Apollo itself too had previously eradicated and toppled another religious cult that had dominated Delphi before it. This was the worship of Gaia, the mother goddess of fertility, since previous to classical Greece, Delphi had already been a place of worship, and in fact, traces of human settlement and religious ritual as old as the Neolithic period (4,000 BC) were found on Mount Parnassus. 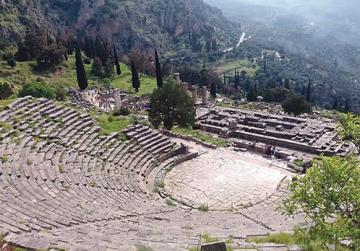 The ancient theatre at Delphi.

It was in the inner sanctum of the Temple of Apollo that the mythological Omphalos was kept. The Omphalos was an enormous ancient stone which, according to legend, the god Zeus had placed in Delphi to mark the centre of the world, which is why the Greeks considered Delphi to be so important.

The marble Omphalos was called ‘the navel of the earth’, and together with the Oracle and her prophetic visions, contributed to the rise of Delphi as an important centre for religious worship, commerce and trade. This was because many important rulers, nobles, politicians and wealthy people came as pilgrims to visit the oracle, in order to consult her before making any important decisions.

The process was a lengthy one. After purifying herself at a sacred spring, the prophetess would burn and drink laurel leaves, after which an animal was sacrificed to Apollo, before she would sit and meditate for hours, while inhaling the fumes coming from a fissure in the earth. It is believed that this chasm, supposedly caused when the giant snake Python was slain by the god Apollo, could have really existed, and that the noxious fumes, together with the intoxication caused by ingesting laurel leaves, could have caused hallucinatory effects.

Moving on up the steep path, I finally arrived at the Ancient Theatre of Delphi. Originally constructed in the fourth century BC, the theatre could accommodate around 5,000 spectators on 35 rows of stone benches, as well as an orchestra. Although abandoned with the rest of the site in late anti­quity, the theatre was later restored due to the threat of landslides, and can today host live theatrical performances. The acoustics are still amazing, and one can admire not only the entire sanctuary from it, but also the lush valley below. Truly an awe-inspiring panorama. 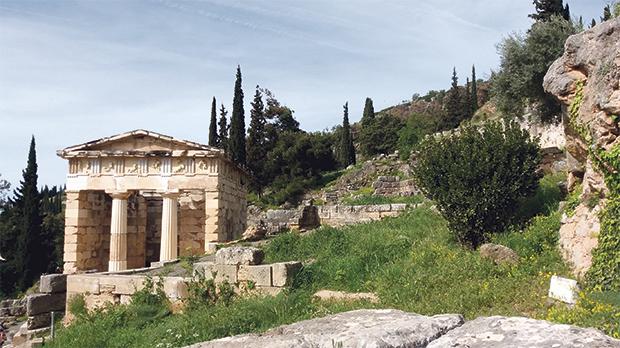 If one continues to climb Mount Parnassus, one also finds the Hippodrome, or stadium, where political leaders and athletes competed with their chariots during the Pythian Games. These games, which occurred every four years and were actually the precursors of our modern Olympics, drew competitors and spectators from around the Mediterranean and were another source of income and fame for the sanctuary of Delphi. The stadium itself was originally built in the 5th century BC, could seat 6,500 spectators and has a 177-metre-long track.

I must admit that at this point of my ascent up the mountain I was not just famished, but also totally parched. I had not thought about bringing any food or water with me, and though it was still April, the heat was truly unbearable. At least I had worn flat, comfortable shoes though, so that was a blessing.

The only source of water I had seen during the whole climb had been a small modern drinking fountain close to the street near the museum, and the dubious liquid it provided hadn’t attracted me much. So, be warned, take some provisions with you, and wear light clothes and good shoes before you start the track.

Delphi is situated only two hours and a half by car from Athens. There are many day tours available from the capital itself. The modern settlement of Delphi is to be found west of the archaeological site. It is replete with taverns, hotels and accommodation for those who wish to stay overnight.

Those who love hiking, not to mention bicycle enthusiasts, will surely appreciate the beautiful experience of leisurely walking or bicycling from modern Delphi to the ancient sanctuary, which is to be found only half a mile away.

Before leaving the mountain, make sure to walk down the slope from the museum and parking site to the Tholos of Athena Pronaia at the base of the sanctuary around a mile to the southeast of the main complex. The Tholos is a small circular structure constructed around 380 BC. Only a few columns are left of the 30 original ones. However, again, it is well worth the effort.