Ramona Depares interviews Aedyn Jak about his debut publication, a collection of prose, poetry and illustrations that delves into the human condition.

It’s a nice, chunky book with an immediately eye-catching cover, the kind that you can imagine leaving lying around on your coffee table as a potential conversation starter. The name itself, definitely, makes the unacquainted reader raise an eyebrow – Disquiet Milk. Then there is the illustration – a milk jar, but with something rather disturbing housed within.

Open the book and the intrigue increases. Divided into five sections, Aedyn Jak’s debut publication is a seamless fusion of prose and poetry, bringing together a kaleidoscope of moods and themes. And then there are the illustrations – dark, introspective, drawn by the writer himself and complementing each theme. The book also includes a number of photographs by Peter Mark Mercieca.

It is impossible not to wonder about the inspiration behind the title – what is ‘disquiet milk’, anyway? Aedyn Jak gives a touching and intimate explanation in the preface to his book, which I will leave you to discover. I caught up with him to find out more about the process that led to this collection.

When did you start working on the book and what were the biggest challenges encountered?

Really, the content has been coming together since I was a young teen. The actual compiling part, however, started last April. 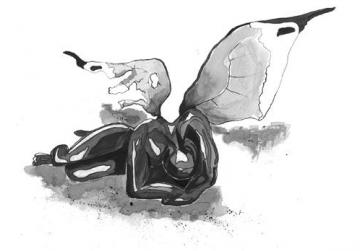 The biggest challenges had to be the editing. Editing is a very laborious task; I had to be especially careful when editing a poem from years ago. There is the natural instinct to want to improve upon the original material, but you also need to remember the essence of your mental processes at that time. It is a very fine line; one ought tread carefully.

How would you describe the collection? Is there a particular theme/mood to the poetry and stories?

I must tell you, first, how some of my poems were first described to me. An old friend of mine had read a few poems around 10 years ago and he actually asked me whether I saw a theme in my work. Indignantly, I replied that of course not, they’re all so different! To which he replied that, actually, my poems were almost always leaning to the parasitic, in that things seem to take over or consume other things, even if in a small way.

At the time, I had denied this critique, but I eventually saw that he was right.

Something else I came to notice about my writing is the way I connect colours with emotions or thoughts and the frequency with which I reflect on nature versus industry.

A seamless fusion of prose and poetry, bringing together a kaleidoscope of moods and themes

I also seem to be a little fixated on the human condition, sleep and consciousness. Those who read all my work will probably think me a futurist or a ‘believer in the next generation’. And I suppose I am.

Do you think of yourself more of an author or an illustrator?

Author sounds a little haughty. Honestly, I see myself as a writer and I think of myself as a storyteller. With that in mind, I suppose the visual narrative comes in. To me, illustrations are part of the story and a way to let someone inside my mind. 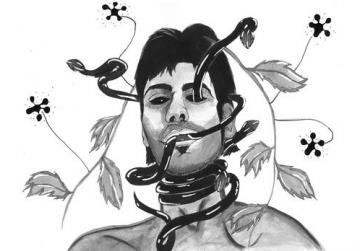 I believe that in the case of many creative projects one individual decides to take on, one can expect it to be confronting on first contact. The idea needs to bake, in some cases for years. I would say it is quite solitary work and you need to be cut out for that, not earning money conventionally and working odd hours of the day seems to be the nature of it. You will go a little crazy with design and details if you want a tight result.

Then, once the raw parts of your work are done (in my case the short stories, the poetry and the illustrations) comes the smorgasbord of options. It can be a little like being in cockpit and told to fly a plane. It was encouraging to see friends help me with things like editing or networking, even if they were in the US or the UK, they did what they could, which was valuable.

As for publishing, it’s still a journey of discovery and it is a little daunting. I was told poetry is unpopular and hard to sell. But I still believe it is best to put it on a public platform and see the reaction for yourself. After all, so much depends on the individual work. In fact, I would tell people to believe in completing their project, no matter what it entails or how it is presented. The value is in doing it, regardless of naysayers. Doing the work is more valuable than not doing it and certainly more valuable than discussing its worth. 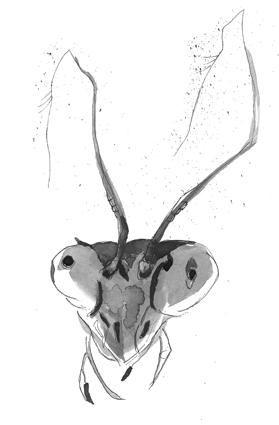 Do you have a favourite from these works?

I am fond of the illustration of the praying mantis head; something about it is very hard-hitting and I like that. I, naturally, gravitate towards some poems more than others. I tend to like the poems from the A Small Light section, mostly because they comfort me. They remind me of a state of mind that I know I have had at various points, so when I feel overwhelmed, they have the power to remind me that I am bigger than my problems.

Given people’s reduced attention span and e-readers, do you believe there is still space for print? What do you feel a print version gives you that a digital one doesn’t?

I feel print is changing. I am a Kindle user myself, so I am a digitally-oriented person. But many people are drawn to the book as an article they can hold, thumb, bookmark or even write on. It can become that artefact of comfort and I get that. I still want that from time to time. I did feel the need to include a visual narrative in the book and that lends itself to print. A picture book that works for adults.

What are your passions besides writing and art?

Film. Being a writer and director is my first love. In a way, that is writing and art though, no? I haven’t strayed too far. 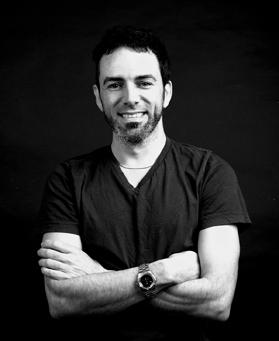 Are there any particular writers and illustrators that have helped form your style?

None in particular. I would say much of my inspiration comes from music, places and nature, esoteric subjects and mysteries. I am inspired very much by bone-sharp film-makers, people like Stanley Kubrick and Quentin Tarantino. I go through phases of watching 1950s B-movie sci-fis or 1970s blaxploitation films. I spend a lot of time listening to music from the 1930s and 1940s. It’s a kind of time travel. As for books, I like literature from the industrial revolution or science fiction set in a future space. I will even read a drab book as long as I get that setting. I’ve read quite a few classics. Two of my favourite books are The Painted Bird, which is quite obscure, not a classic) and Brave New World.

Do you see yourself working on another book for publishing?

Someday, I hope. We’ll see what comes together.

Finally, a funny/weird anecdote related to getting this book ready?

During the editing phase, I do remember spending a few weeks really depressed. It was like a heavy negative energy that I couldn’t shake. At first, I didn’t think much on it, but one night I was Skyping a friend who was familiar with some of my work and we got talking about it. I, eventually, admitted that I was feeling a little down. She reminded me that I had been working on this chapter for a month and that “of course you’re down”. She said it as though this was the most expected thing in the world. And I realised that, although, in my mind I was simply editing, in reality I was also getting suckered into some dark mental territory. Words can be powerful.