Eric* was insulted, spat on and slapped in front of his children, but he did not want them to think he was breaking up with their mother.

“Fear of losing custody of my children, fear that I would be perceived as the perpetrator, fear that things could get worse and uncertainty of finding shelter kept me from taking action,” he told The Sunday Times of Malta.

Many times, if a woman fled home, society would say she was seeking protection for herself and her children because she had no alternative.

“If I had left home, people would have said I was abandoning the family,” he said.

Psychologically I was broken as I felt inferior to her partner. It came to a point where I ran out of ideas on how to improve our relationship or defend myself verbally

The Sunday Times of Malta spoke to Eric, a man in his 40s who suffered abuse from his wife for years, after a video went viral showing that men are often ignored or laughed at if their female partner physically abused them in public, when male perpetrators in a similar instance were scolded by passers-by.

The video, by a charity that helps male victims of domestic abuse, ends by stating that 40 per cent of domestic violence victims are male. While this figure was criticised as misleading, many agreed that the number of men attacked by female partners was much higher than thought, because men were reluctant to report abuse.

According to figures provided by social agency Appoġġ, last year only seven of the 243 new cases that its Domestic Violence Unit received were male victims.

Like all marriages, Eric’s had its ups and downs, and he tried to resolve arguments diplomatically, opening up to his colleague at work and seeking religious support.

Eventually, when their two daughters were still toddlers, his now estranged wife started cheating on Eric.

“I used to think that if he got out of her life, we would be able to sort things out. I kept trying to sort things, but year after year, physical violence escalated.

“When I discovered her extramatrital relationship I kept everything to myself and was too scared to confront her about it. I was scared that if I spoke out, the situation would get worse.”

Instead, Eric would keep a copy of her e-mail conversations with her partner, in his car’s spare tyre and lock them up at work.

He lost his appetite and visibly lost weight. When he eventually did speak up, the couple received counselling, but the abuse continued. He was slapped, strangled, punched in the stomach and his wife hurled crockery at him.

The abuse was not just physical. His wife’s financial demands grew and so did the insults. When she felt harassed by her partner, she would tell Eric to “man up and confront him” and she rattled his confidence by banning him from the bedroom and insulting him in front of the children.

Looking in the distance, going through every single detail, he recalled how once she pushed him off a ladder while he was painting the walls.

“The blows were coming from all directions. Psychologically I was broken as I felt inferior to her partner. It came to a point where I ran out of ideas on how to improve our relationship or defend myself verbally.”

Asked whether he ever de­fended himself, he said there were times he felt like retaliating but would keep his children in mind.

“I also knew that if I lifted a finger on her, it could be used in evidence against me and I would be labelled as a domestic violence perpetrator.

“One day when she hurt herself while punching me, she threatened she would report me, but no report was filed against me.”

On another occasion, a police sergeant asked Eric whether he was actually the aggressor, be­cause since domestic violence victims were usually women the officer thought she had reacted to his abuse.

Eric called at a police station on more than 20 occasions, but never filed charges. Once, when the police checked up on the couple, he received more blows for telling on her.

Through his ordeal, Eric’s main concern was the children. He recounted that he had provided the police with another address where he could be found if he had to flee the house, insisting that he was not abandoning his children.

He also sought Appoġġ’s help when she started leaving the children on their own at home while he was at work. Meanwhile, he sat down with them through their studies, hoping to protect them from their parents’ marriage breakdown. The last straw came when she used profane words in front of the children. Eric sought the help of a legal mediator and his former wife asked for separation.

Despite not having sought help for himself, he made it clear he was not a “weekend father but a permanent father” and when the two went their separate ways, Eric received unlimited access to the children.

Eric has since received counselling, moved into a new place and is regaining back his life.

“I felt relieved and gained back my confidence... and weight as well,” he chuckled.

* Name has been changed.

The Appoġġ Domestic Violence Unit, which offers service to victims of domestic violence, worked with 626 cases.
Of these, 243 were new cases and seven were male victims.

The agency’s emergency shelter, Għabex, worked with 71 cases – which involve women, and in some cases also their children. 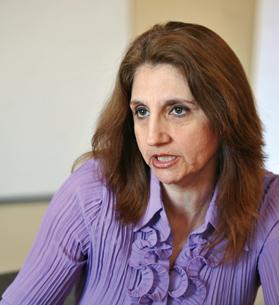 Men are more reluctant to seek help because they might think they will be laughed at or treated differently from female victims, according to Aġenzija Appoġġ’s operations director Ruth Sciberras.

However, the agency’s social workers deal with male victims just as they would with women.

They see to their needs, like housing, and strive at empowering them, while if necessary, they are also given counselling.

“Gender does not make a difference because domestic violence is wrong wherever it comes from,” she said, urging male victims to speak out.

If they were embarrassed to seek the agency’s support, victims could seek private counselling, she suggested.

Domestic violence can be physical, emotional, psychological and economical, and does not always involve spouses, but included old people living with their children and harassment between former spouses.

Abuse on men tended to be emotional, with the female partner undermining the man in front of the children, although there have been cases where men were physically assaulted, Ms Sciberras noted.

Aġenzija Appoġġ provides services to all victims of domestic violence and their children, and also to perpetrators through its supportline 179 or 2295 9000.

Victims can call on this number anonymously and will only be referred to professionals if they need help.

Through the service, victims are helped to gain back self-confidence and can also be provided with legal aid.