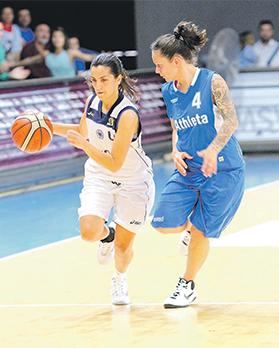 The fourth game from the 2017 Women’s League final series resulted in an interesting, balanced encounter which could have gone either way and was only decided in the last moments.

In the end, it was Athleta who ended up as victors to force a decider. This will be played today at 2.45pm, establishing the new champions – Luxol (for the fourth time in a row) or Athleta.

The first break in the game arrived midway through the opening quarter when Athleta hit eight consecutive points with treys from Antoinette Borg and Leanne Sciberras.

Although Luxol had points from Cristina Curmi, Athleta still managed to extend their lead with a 10-0 run either side of the first two quarters following hoops from Amelia Simmons and Christina Grima to establish a 30-15 lead.

Yet, Luxol then managed to keep their opponents without a single point for the next six minutes. Attirah Munir came off the bench and, together with Stephanie De Martino, helped the team to reduce the margin.

Grima finally ended Athleta’s drought but further points by De Martino made it just a one-point game at the change of ends – 32-31.

The third quarter had two main facets. Athleta started with two back-to-back treys to go 38-32 ahead before Luxol potted 13 unanswered points  with two minutes to go in the third quarter.

Yet, Athleta managed to hit back with an eight-point rush helping them regain the lead, albeit marginally, 46-45, with the last quarter to go.

It was a tense, tight affair in the last ten minutes. Athleta led 55-50 at one point but a long-distance Paula Ellul shot revived Luxol’s hopes.

Both sides missed key free-throws with Luxol having six from 11 and Athleta two from six, also losing Grima with fouls.

Two Munir points put Luxol just a point away, 57-58 but at the other end, Borg potted an important hoop for Athleta.

With a handful of seconds to go, De Martino was again fouled. She scored the first free-throw and then, willingly, missed the second with the hope of an offensive rebound but it was Simmons who recovered the ball to ascertain Athleta’s win.