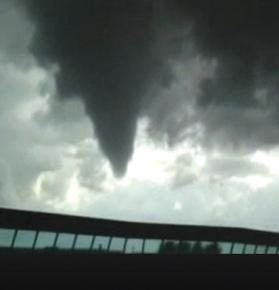 A tornado rampages through an industrial area in eastern Milan.

A tornado tore through an Italian industrial region in Grezzago, near Trezzo, in the province of Milan on Monday, injuring dozens and damaging buildings and vehicles.

Mobile phone footage captured the tornado ripping through the industrial zone and leaving a trail of devastation in its wake as it destroyed cars, overturned trucks and uprooted telegraph poles.

Firemen, civil protection and other rescue services rushed to the scene. Although no deaths have been reported there are reports of a dozen injuries.

Mobile phone footage filmed by locals in the province of Milan captures the moments a strong tornado plume hit the area.

The tornado, estimated around grade F2-F3 on the Fujita scale, which measures the intensity of a tornado based on the damage caused to structures, hit Trezzo Sull’Adda and Grezzago in the province of Milan on Mon-day evening.

Amateur videos shows the tornado ripping through the industrial zone with great strength, sending debris flying into the air.