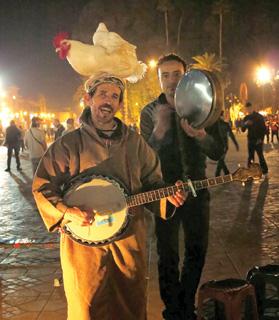 Abdul performs with a chicken on his head.

A moustachioed man emerges from the maze, cycling past me, a monkey balanced on the handlebars. My eyes follow the mischievous grin, but my attention soon diverts to the piercing sound of a snake charmer’s flute. Touts shout out impossible deals, smoke rises from street barbecues and innumerable women in hijabs offer me henna tattoos.

My ears prick up as a dozen mosques call people to prayer, each adding another distinct layer to Marrakech’s meandering soundtrack. Stop, deep breath, take it all in... but my eyes have lingered for too long and the snake charmer is beside me, trying to throw a cobra around my neck.

Marrakech’s Medina defies GPS systems. The constricted alleyways aren’t mapped. Instead, they colour a large chunk of the city map yellow and are designated simply as ‘souk’.

Technically, that means market, but in reality it meant twisting and turning for seven hours until I couldn’t even remember where I was going in the first place. Each ground-floor building sells something. Some sell everything: carpets, trinkets, lanterns, olives, hats, camels, camel tours and Chinese sewing machines that resemble staplers.

Then the souks compartmentalise and suddenly I was walking through a wool market, then a blacksmiths’ alley, then a dozen artisans’ markets where they sell the same things as elsewhere for twice the price.

Vendors are always inviting, yet rarely persistent. They respond to an inquisitive glance, but they happily allow me to pass without breaking stride. Some lure me inside, feigning conversation that leads to a showcase of spices or scarves. But they always accept a no with a courteous nod, even if we’ve shared tea and stories for almost an hour.

Marrakech does have clearly marked attractions. Two palaces dominate the southern half of the map. In searching for them, I found myself in the northwest corner, drinking tea on a fourth-floor roof.

From above, the city is even more confusing. Each building is rectangular and mud-coloured. They squash together, surrounded by stark brown desert but are overlooked by the snowy peaks of the Atlas Mountains.

Rooftops are universally flat, many competing to hold the most satellite dishes. At a glance, everything looks the same and this seeming monotony is Marrakech’s beauty. Nothing looks out of place and closer inspection reveals subtle individuality.

Exteriors are modest, fulfilling their place in the grand cityscape. Interiors always show an artist’s touch.

Go through an open door and it’s impossible to predict what will be found. Forget the vain colour charts found in home-decoration stores; this city is conceived using a handful of naturally created tones that enable impossible combinations: royal blue and yellow tiled floors, purple and green tablecloths, maroon and orange fountains. Then the walls are always plain white, the simplicity enabling the rest to shine.

Doorways are elaborately carved and, looking up, I see ceilings painted in unforgettable patterns.

Then I would go back outside, turn a corner and walk into a 14th-century madrasa, or a man with a wooden potato cart.

Why did I order sheep’s brain? Cow’s cheek and some indescribable blubber complete the meal, washed down with a healthy tablespoon of salt and some words of encouragement from the chef

The city’s rhythm works on show and tell. Look lost and 100 offers of biased assistance will be forthcoming. Show enthusiasm and the price doubles. Timid faces are exposed. And anyone stopping and taking it all in is pounced upon. That was my mistake.

The charmers approached and two snakes are half-flung through the air towards my face. Another charmer’s flute has two cobras hissing, while a third brings out the upturned tambourine demanding money.

Eyes down, I’m stumbling away, muttering fake apologies, my left knee glancing the snake, but it doesn’t matter as the charmer is moving on to somebody new.

The old medina weaves and stutters, each turn taking me into more of the same. Whenever they break free, the alleyways lead to Jamaa el-Fnaa, the central square that encapsulates this chaotic Moroccan circus.

So which way to turn? First to the fresh orange juice stall, perhaps, but his neighbour has already clocked me and I’m irrevocably attracted to a bearded man who is boiling snails.

It’s €1 a bowl and this price seemingly precludes washing away the soil. An earthy taste clings to my teeth; nothing that a steaming glass of minty goodness can’t fix.

The tea adds caffeine and sugar to further stimulate the senses and I’m now sat on a wooden bench, playing a broken drum with a Berber street band. All over the square, old-fashioned performers entertain for cash.

Arabic storytellers attract crowds of hundreds, keeping them on edge before demanding donations so the tale can continue. The assortment of drums and guitars I’m playing with is charismatically led by Abdul, who halts the song to demand €15 before the band can continue.

Some bodies turn away, evidently unimpressed by my offbeat banging. Show and tell. Wait for too long and the crowd disappears. Start playing too soon and the band goes home hungry.

I throw in €2 to keep things moving. My reward? The broken drum is replaced by a metallic symbol that drowns out half the band. Bad move Abdul; I can’t even describe this broken Moroccan beat, never mind play it.

Once more I lower my eyes and stumble away, content that they’re better off without me. To the towering minaret? Perhaps a rooftop cafe? Or a bearded man selling sweet pastries? No, now the street barbecues. Sit down, relax, order... but why did I order sheep’s brain?

Cow’s cheek and some indescribable blubber complete the meal, washed down with a healthy tablespoon of salt and some words of encouragement from the chef. Do people actually like this? I don’t think so. I was just making a naïve grope at trying to be local. But what is local in Marrakech?

Since long before Ryanair started offering cheap flights, this has been a city for visitors. Snake-charmers and monkey handlers have been pestering foreigners for centuries. Jamaa el-Fnaa has always been a central place where caravans of traders would congregate amid intoxicating smells.

Shouts intermingle, eyes make contact, people look confused and there never is the time to soak it all up. It just happens.

Marrakech isn’t about attractions. It’s defined by thousands of interactions, each building an energetic picture. When my head hits the pillow, infinitesimal recollections flood my mind: the raucous laugh of a saffron trader, getting lost in the Jewish quarter, more cups of tea, almost getting run over by a horse carriage, wandering through a derelict palace.

I’d almost forgotten that Abdul played the guitar with a live chicken balanced on his head. My day won’t be repeated. I don’t even know where I was. And this is what Marrakech offers everyone: a completely unique experience each day.