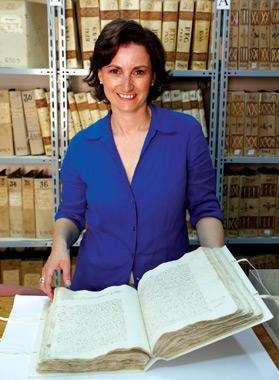 The manuscript containing the earliest known Maltese poem – the Kantilena by Pietro Caxaro – has been restored and given a new cover.

Also restored were the notarial deeds of Brandano Caxaro between 1533 and 1536, as the notary had included his uncle Pietro’s poem, forming one volume.

“The random inclusion of the poem on the penultimate leaf comes as no surprise because notaries used to add similar notes at the end, but it is interesting that the poem is not written in Latin, the language used for notarial deeds of those times,” conservator Theresa Zammit Lupi told Times of Malta.

Pietro died in 1485 so the Kantilena was definitely written before that date but it was not until five centuries later that Godfrey Wettinger and Fr Mikiel Fsadni stumbled across the medieval poem at the Notarial Archives in Strait Street, Valletta.

The Dominican priest and historian from Vittoriosa passed away earlier this year, aged 97.

Despite its good condition, the leaf containing the Kantilena is one of the most susceptible to damage

The manuscript is now housed in the Notarial Archives in St Christopher Street in Valletta.

Sponsored by Akkademja tal-Malti, Dr Zammit Lupi was tasked with restoring the volume by the Notarial Archives Resources Council.

She said the manuscript had been rebound and repaired in the 20th century. However, it was attacked by insects, suffered ink corrosion and had torn corners.

During her research, before starting the restoration, she managed to trace the original 16th century sewing of the manuscript through the holes punched in the document. She dismantled it and carried out superficial cleaning before consolidating the ink and repairing the missing pieces with Japanese paper.

Despite its good condition, the leaf containing the Kantilena is situated towards the end of the volume, making it one of the most susceptible to damage, Dr Zammit Lupi explained.

It took her two weeks to restore all 278 leaves of the manuscript.

The work included replacing the acidic cardboard cover that had been sewn to the document in the 20th century with one made of calf skin, following the method used in the 16th century.

The manuscript is now stored in a box made of acid-free material and will be kept in a metallic cabinet.

Like the Caxaro manuscript there are thousands of other documents, some in much worse condition, at the archives.

Restoration of the documents and maintenance of the place relies on private sponsorships and the work of volunteers.

The Notarial Archives Resources Council was set up in 2005 by Joan Abela.

Volunteers include restorers, archivists, students and others with unrelated jobs but “a love for Maltese heritage”.

The Government will be setting up a steering committee made up of the council members, the Acting Principal Notary and government representatives to evaluate proposals and projects that could include tapping into European funds.

At the Notarial Archives in St Christopher Street there are about 24,000 volumes, some of which are still being catalogued.

These include bastardelli (drafts of notarial contracts) and registered copies of the originals that are at the archives in Mikiel Anton Vassalli Street.

With the oldest manuscript dating back to 1467, that of notary Pawlu Bonello, every document sheds light on the lives of people from every strata of society, including those at the margin, such as slaves.