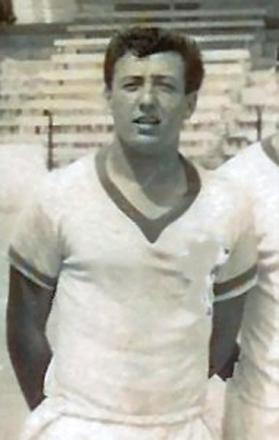 Lino Falzon made his debut for Sliema Wanderers on January 1, 1963 in a league match against Birkirkara. The Blues won a thrilling match 2-1 and Falzon played a blinder in the Wanderers’ midfield.

A product of Mosta Athletic, Falzon served his apprenticeship with his home town club but it was obvious that Mosta would not be able to hold on to their talented product.

In fact, Falzon moved to Sliema where he proved his worth by winning all the honours that the local game could offer.

After his successful debut, Falzon became a regular fixture in the Wanderers’ line-up. He never lost his place except for injuries and proved to be one of the best acquisitions that Sliema made during that period.

He could play in any position in defence or midfield but his best role was perhaps at left-half where his defensive qualities could best be appreciated.

In his first season with the Wanderers, Falzon won the first of three FA Trophy medals. It was a great moment for the youngster as he received his winners’ medal after Sliema had beaten Hibernians 2-0 in the 1962-63 final.

The following season Falzon went one better when he helped his team win the league.

This was the start of a great period for the Blues.

They dominated Maltese football to such an extent that in three glorious years between 1963 and 1966 they won the championship three times in succession, the FA Trophy twice and added to their tally the Scicluna Cup, Independence Cup, Testaferrata Cup and MFA League for good measure.

Domestic honours, however, were not the only rewards which Falzon collected. He was capped five times by Malta at a time when the national team played only one or two matches in a season.

Falzon won his first cap on June 28, 1962 against Denmark in the European Cup of Nations.

Malta lost 6-1 that day but Falzon’s performance in defence could not really be faulted. It was an all-round disappointment which reflected badly on the way the team was prepared for such important occasions.

Falzon was also picked to play for Malta Amateurs in the first UEFA Amateur Tournament which was played in Liguria, Italy.

For this competition invitations were also extended to strong nations such as France, Germany and Spain. This time, the prestige of the Maltese game was fully upheld by the squad which was trained and coached by Karm Borg.

Malta Amateurs gave an excellent account of themselves and achieved the best results obtained up to that time by a local team playing in a tournament abroad.

Malta lost their first match 3-1 to Spain but then beat the Italian side 2-1 with goals from Robbie Buttigieg and Ronnie Cocks.

And, as if this victory was not enough, the team went on to draw 3-3 with Holland and lose narrowly to France 4-2.

Falzon stayed with Sliema for seven seasons in which he played 91 matches in all competitions and won 12 major honours. After leaving the Blues, he returned to Mosta Athletic and for a time he also took up coaching.