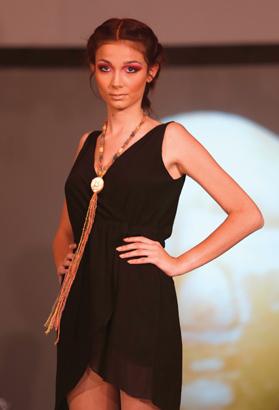 A Neolithic woman’s face stole the show at this year’s edition of the Mercedes-Benz Fashion Week.

Members of the audience at Kind’s showroom in Lija were slightly taken aback when the catwalk started to resemble a prehistoric temple, as models wore replicas of jewellery believed to have been worn by people who lived in Malta some 5,600 years ago.

The star of Tuesday evening, however, was a 3D virtual reconstruction of a woman’s face based on a prehistoric skull found at the Xagħra Stone Circle in Gozo.

The woman’s strong features and dark brown eyes were described by members of the audience as “undeniably Maltese”.

The woman behind the reconstruction, Prof. Caroline Wilkinson, is a British anthropologist best known for her reconstruction of the head of King Richard III of England.

The replicas were artefacts discovered at various prehistoric temple sites across Malta and Gozo and form part of the permanent display at Heritage Malta’s National Museum of Archaeology in Valletta.

Heritage Malta said: “The Megalithic Temples are slowly revealing secrets about a population who was artistic, creative and had an eye for detail as well as a taste for the delicate and the exotic.”