Sponge fishing is one of those quintessential Mediterranean maritime industries that have been conducted in the area since antiquity. The Queen’s Palace in Knossos, Crete, dating back to the Minoan period (3,500-1,500 BC), features sponge painting on its walls, a technique still in vogue today that makes use of a spherical sponge species (Hippospongia communis).

Images of sponges have been found on Greek pottery remains, as a depiction of opulence and as a status symbol. Homer lists sponges as hygienic tools in the Iliad and the Odyssey, while Aristotle makes reference to an elephant nose-like tube that divers used to use when fishing for sponges. A number of Roman writers, such as Cicero, allude to the use of sponges for personal hygiene. The Latin verb spongiare, which means to daub, originates from the species’ name. Each Roman soldier was equipped with a marine sponge for precisely the same purpose. 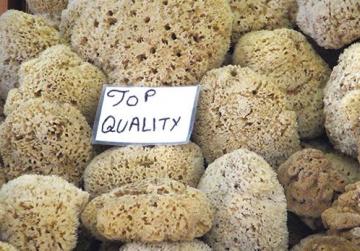 Traditionally, Greek fishermen from the island of Kalymnos were intrinsically linked with fishing for sponges. Before the advent of diving equipment, the first sponge fishers were skin divers who could only avail themselves of rudimentary material such as lo specchio (a glass surface useful to scan the seabed from the boat) and the skandolopetra, a 15kg stone that skin divers held on to, to descend quickly along its shot line down to the sea bed.

A game changer came in the mid-19th century when the skafandro or macchina was invented – a rigid diving suit with air being supplied from the boat through an umbilical cord. This marked a revolution since sponge fishers could now walk along the sea bed for hours, leading to enhanced exploitation of sponge grounds but also to many deaths among sponge fishers due to embolism. In her book Bitter Sea, Faith Warn describes that between 1886 and 1910 about 10,000 divers died and 20,000 were permanently disabled as a result of a lack of awareness about hyperbaric dangers – such conditions affected about half of all spongers.

Hundreds of kilos of sponges are caught in the central Med, though very little official data is collected about these fishing activities

The effects of overfishing, made worse by the so-called ‘sponge disease’, drove some of the largest and more productive sponge banks worldwide almost to extinction. The outbreak of the first Mediterranean sponge disease was documented in the 1980s, and its extent was such that in several countries like Greece, Turkey, Cyprus, Syria, Egypt and Tunisia, sponge harvesting was halted for two fishing seasons. In the early 2000s, Mediterranean sponge fisheries partly recovered, yielding around 50 tons of sponges per year, with Tunisia, Greece, and Libya as the major sponge-producers.

The University of Malta recently conducted a study on the fishing for sponges in the central Mediterranean, mainly in waters to the south of Lampedusa and off the island of Pantelleria, as well as in Tunisian waters. It is conducted either by Greek fishermen who visit these waters in spring each year specifically to catch sponges or by local trawl fishermen who net sponges as bycatch and sell them to processing companies.

Through questionnaires and interviews with sponge fishermen, it transpired that hundreds of kilos of sponges caught in the central Mediterranean are put on the market each year, though very little official data is collected about these fishing activities. This lacuna in data collection needs to be addressed in future as a first step in managing this marine resource.

Some findings of this study were presented at the 51st European Marine Biology Symposium meeting in Rhodes last September based on research by Simona Ricci funded by the 14th executive programme for cultural collaboration between Italy and Malta. They are due to be published in a scientific journal.

This alien marine species, which delivers a painful sting, has regularly formed enormous blooms in Israeli waters, playing havoc with fisheries and forcing the closure of beaches and coastal power stations that use sea water to cool down. In recent years, the species has also bloomed much closer to home, in Tunisian waters, namely the Gulf of Gabes and the Bizerte lagoon. To date, only individuals of the species have been seen in Maltese waters.

These findings are being published in the Aquatic Invasions journal. Previous publications on the same species by the author can be accessed from the websites below.