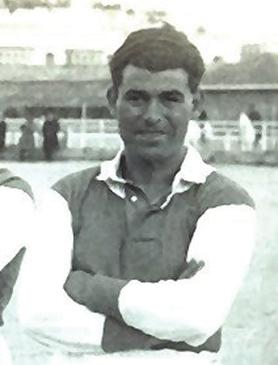 Carmelo Cauchi – a star performer in Floriana’s 1927-28 title-winning side.

The following Sunday the first big match of the season was played between Sliema Wanderers and Floriana.

The first exchanges went Floriana’s way and after only nine minutes Paul Storace hit in the first goal for Floriana.

A few minutes later, George Azzopardi went up for a high ball with Edward Scicluna. Heads met and Azzopardi came out the worse and was forced to leave the pitch for several minutes. Substitutes were not allowed in those days and Azzopardi had to continue the game with a bandaged head.

Sliema took advantage of the situation and pressed hard for the equaliser but much against the run of play it was Floriana who scored again. Carmelo Cauchi sent in a perfect pass to Storace who, without any hesitation, steered the ball past Joe Nicholl.

With Azzopardi back on the field, Floriana regained control. Despite his injury, Azzopardi played a blinder and it was from one of his promptings that Floriana scored their third and final goal.

Cauchi passed to Vassallo, the latter let the ball roll to Ġuże Alamango who beat Nicholl with a first-time volley.

The league continued with St George’s beating Sliema Rangers 5-1 while Cottonera had the better of Marsa United 3-1.

The Wanderers met Valletta on December 11 and the Blues won narrowly with a goal in the dying seconds of the game.

Floriana, however, kept their place at the top of the table with a 3-1 victory over Sliema Rangers. At that stage the league was stopped to make way for the Christmas tourney.

The competition resumed on January 14, 1928 when St George’s beat Cottonera 6-0.

The next day there was another of the big matches of the season when Valletta United met Floriana. The Whites took the field determined to take something home from this game.

Valletta’s fury took Floriana by surprise. The Greens never settled down and Valletta fully deserved their 3-1 victory. Two goals by Zammit and another by Brincau gave the points to the Citizens. Cauchi scored for Floriana.

On January 21, Sliema met Marsa but this game was abandoned 14 minutes from time due to a heavy storm with the score still 0-0.

The replay was held more than a month later, on February 25. The only adjectives which could be used to describe this match are ‘savage’ and ‘brutal’. The strained atmosphere and the laxity of the referee both contributed to the atmosphere of a battlefield.

Five minutes into the second half, with Marsa leading 2-1, Sliema’s Dingli received a terrible kick on the leg and lay writhing on the ground. Some of the Sliema players carried him behind the goal and then the whole team left the ground and refused to continue. The referee thus had to abandon the game.

Sliema paid dearly for their conduct as the MFA banned them for the rest of the season.

The 1928 encounter between Floriana and St George’s was attended by one of the biggest crowds ever assembled at the Empire Sports Ground.

The gates were opened at noon and had to be closed well before kick-off.

Floriana’s rivals were jealous of the their unbeaten record against St George’s.

The Saints were, therefore, determined to tame the fury of the Greens and to ensure, for once, a triumphant entry into their city at the expense of the Irish.

At the same time, the Valletta United supporters were greatly interested in the outcome. A drawn game would have brought them on equal points with Floriana and the Saints, thus necessitating the need for deciders between three teams.

The game had barely started when Agius scored the goal which gave Floriana another victory over their old rivals.

After this defeat St George’s did not take any further part in the competition.

In their last match against Marsa they gave away a walkover. Floriana now needed only to beat Marsa to make sure of the title.

They made no mistake and on March 25, they surmounted this last hurdle with a 4-0 victory. Cauchi scored two of the goals, the others coming from Pawlu Storace and Harry Samuel.