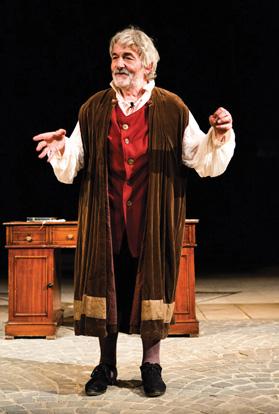 The drama of the human condition is captured in instances of individual adversity as well as the daily humdrum struggles of those intent on understanding the world around them in the face of the generally accepted status quo.

In the same manner that challenging authority in the light of scientific reality was the only logical step forward for some of the greatest thinkers of the renaissance and the enlightenment, the International Science Theatre Festival was a great way of confirming that the arts and sciences have room to stand not only side by side but also to work collaboratively.

Hosted as part of this year’s increasingly successful Science in the City event held in Valletta last weekend, the two short biographical plays on offer, running consecutively each night, delved into the lives of some of the early leading scientists of the Western world. The plays imagined what these highly inquisitive polymaths may have endured in their quest for scientific truth, academic recognition and their battles against Church dogma to prove not just their innocence but to improve our view and understanding of the world.

The first play on offer was a British one-man play: Icarus Theatre’s The Trials of Galileo, written and directed by Nic Young and interpreted by Tim Hardy. This hour-long address to the audience explained Galileo Galilei’s plight and his subsequent loss of the fight against the Catholic Church in his trial at the Vatican, for having documented and written an argument which proved that previously held beliefs about planetary movements were wrong and that it was in fact the sun which was the fixed point around which all the other planets moved.

In other words, he’d proved that the world was not the most important planet in the cosmos for having everything else revolve around it: God’s greatest creation had a greater fixed point controlling it which it simply had to look up to. The entire piece explores not only Galileo’s conflict with the Church and the indignity of being forced to refute his own work, but also the internal conflict which this man – a good Catholic but an enthusiastic scientist and voracious explorer of the skies – had to grapple with.

The beauty of the piece lay in Hardy’s excellent interpretation of the different people he had to deal with during his trial and the events which led up to it – from the judge to the Pope himself. His vocal modulation and subtle tonal changes made his story engaging and compelling to a contemporary audience while reminding them that greatness comes at a price and, more often than not, the benefits of one’s endeavours are not enjoyed or even recognised till years later.

The man with the most accurate telescope, whose vision changed our perception of the world, was human and vulnerable to forces greater than he could handle – though he gave them a good run for their money.

In terms of theatrical value, Hardy’s strength lay in his crisp characterisation and his nuanced vocal control, making it a highly engaging piece.

The plays imagined what these highly inquisitive polymaths may have endured in their quest for scientific truth, academic recognition and their battles against Church dogma

Scicluna interpreted the multiple roles of five scientists as well as the narrator, presenting the audience with the case of Henry Cavendish – who managed to combine the findings of four other scientists to help him determine the weight of the world. Once again looking to the skies, this piece was much more theatrically technical, with voiceover recordings and an elaborate set to illustrate the different scientists’ line of work and their theories.

Naturally, Scicluna’s ability to transform from one character to the next, using a combination of humour and intimate biographical titbits, made this performance particularly enjoyable; bringing each individual’s personality traits, at least as described by historical documentation, to life in their endearing and occasionally infuriating eccentricities.

Aristocratic scientist Tycho Brahe and his assistant Johannes Kepler, who later used their collective work to develop the Kepler observations on planetary motion – as well as Isaac Newton’s law of universal gravitation and Robert Hooke’s experiments with elasticity, which concluded that the extension is proportional to the applied force – led Cavendish to successfully measure the weight of the earth, in what is today known as the Cavendish Experiment.

Very cleverly, this play managed to explore the more human aspect of these highly-esteemed scientists, while emphasising the importance of the positive cumulative effects of research and knowledge – building on work previously done, to discover something new.

Thus the arts supported the sciences, and the sciences, in turn, provided material for the arts to work with. While one explores and discovers elements mathematically based on a scientific method, the other explores the human condition which led to such discoveries and grounds it in an emotional, historical and psychosocial response.

The Science Theatre Festival was itself an experiment which truly worked – exposing the harmonious symbiotic relationship between two apparently disparate subjects, proving that in this contemporary age of specialisation, there is still room for the polymath and that interdisciplinariness is the way forward.