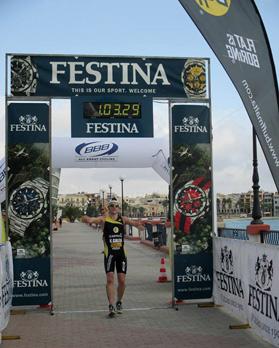 Keith Galea crossing the finish line to win the race in Birzebbuga.

Galea, who dons the Birkirkara SJ colours, stayed unbeaten throughout the four races in the series as Hannah Pace topped the classification for women.

Both triathletes made sure of the titles by winning their respective categories in the final race held recently in Birżebbuġa.

Galea was again dominant in all three segments of the race.

Other winners were Neil Markham (Agones SC) in the Under 23 category, Holger Mitterer, also of Agones SC, in the Over 40 category, Pawlu Brincat (St Patrick’s AC) in Over 50, and John Schembri (Qormi CC) in Over 60.

Pace’s consistency throughout the women’s series paid good dividends as she finished top of the table after the fourth and final race.

She marked her success with a personal best time after swimming 750 metres in 11 minutes, six seconds. She cycled the 20 kilometres in 36 minutes, 40 seconds and ran five kilometres in 21 minutes, 11 seconds. Her accumulated time was 1:10.09.

In other categories, Donatelle Camilleri (Mellieħa AC) was first in the Over 40s and Sue Farrugia (Birkirkara SJ) won the Over 50s category.

The BSJ sprint triathlon championship was held under the auspices of the Malta Triathlon Federation and sponsored by Festina Watches and The Cyclist, of San Gwann.

In organising the series, Bir-kirkara St Joseph Sports Club were also assisted by the Birżebbuġa Local Council, Transport Malta and the District Police.