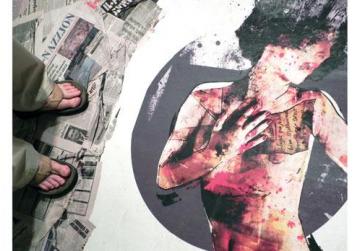 Death of Malta by Pawlu Mizzi

What I enjoy about exhibitions is that each provides me with a new experience. It is not always a positive one, but that is another story.

Exhibitions that I particularly enjoy are those put up by students; these have a fascination of their own.

One such collaborative student exhibition is being held in two locations – the ‘infamous’ Splendid Guesthouse (turned exhibition space) in Strait Street and the Atrium of St James Cavalier, both in Valletta.

The students have been brought together by their tutor John Grech, having all completed a Diploma in Design Foundation Studies offered by the Faculty of the Built Environment at the University of Malta.

All the exhibits were produced as part of a study unit, ‘Introduction to Critical Art’.

They had to work towards the common theme titled Mirrored - Critical Reflections. Their point of departure was 20th Century art, and they were urged to “develop (their) critical faculties”. This advice was not always strictly followed as, for some reason, some students opted for art that was not produced in the 20th Century.

Going back to the art of the masters is a commendable act which more aspiring artists should take on. Four of the students opted to take the concept as a starting point and developed it rather individually in conceptual terms, but the majority took the concept more literally, quoting in artistic terms the art they chose to be inspired by.

Within this framework the students’ interpretation was without limits. The Surrealists and Picasso were the favoured among the chosen artists.

At the Splendid Guesthouse, the first work to really stand out is Zach Muscat’s A Soccer Twist that is a tribute to Jackson Pollock’s action painting, with a twist. Muscat has successfully managed to bring two of his loves together – art and football – and he also managed to interpret Pollock’s technique inventively.

What he did was attempt drip painting on a large fabric support, and then expanding on this by kicking a football over it, in the dark. Action painting with a twist indeed. The football and soccer shoes used are also part of this work.

Some students opted to use solely painterly means. In interpreting Picasso’s Blue Period in The Drunk, Nicholas Tonna may have been too ambitious. Raffaello Corrieri’s One Night in New York, also inspired by Picasso, was an interesting take on perspective, but not sufficiently technically sound.

Steve Xuereb also chose to take inspiration from Picasso, but this time the Cubist period. Rupture was innovative in conception and interesting in execution, literally emerging in three-dimensional space.

A striking interpretation of Franz Kline by Karl Camilleri is his Untitled 2012. This shows an intelligent use of space within the composition and an understanding of Kline’s abstract expressionism. Kline is the only abstract artist chosen to be reinterpreted by the students, maybe because he is harder to understand and to tackle. Camilleri is on the right track.

Ella Fleri Soler also did well in thinking up and bringing to life her Dali Inspired Self Portrait.

Particularly inspiring was seeing the students’ urban consciousness and their sensitivity towards the Maltese Islands’ environment. The insanely profuse building activity is touched upon by Karl Camilleri in Untitled 2012 and Keith Bonnici in Across the Road, the latter being one of the conceptual exhibits and which plays on the senses once you enter the black box he has created.

Pawlu Mizzi took a broader political in The Death of Malta inspired by Jacques Louis David’s Death of Marat and Picasso’s Guernica. Marat has in this case been interpreted as being Malta, and the theme is freedom of expression, hence the use of several newspaper cuttings being allowed to disintegrate in the work as viewer’s trample upon them. A well-thought out, intelligent piece.

A short video called Blood Toil Tears and Sweat by Stephanie Galea was engaging, and seems to promise well for her future in this medium.

It is not possible for me to comment on each exhibit, but the ones I mention are among the more intriguing.

Unfortunately, one must also come to the grim realisation that out of a group of protagonists, only a couple may have the real talent to become inspired and inspiring artists. I would, of course, be glad to be proved wrong on this, and see each develop their own artistic self and career. Having said that, I am confident in saying that I can see some very bright sparks among this lot.

Mirrored – Critical Reflections is open until August 14 at the Atrium at St James Cavalier and the Splendid Guesthouse in Strait Street, both in Valletta.