A line of furry black emerges on the next ridge, appearing from the mist then vanishing beneath the forest’s enigmatic veil. I sidestep the dung, climbing through a dense canopy that smells like spring morning. 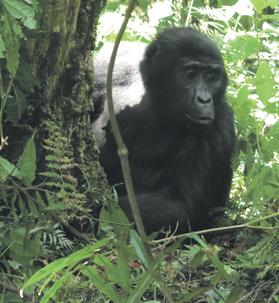 Everything’s fresh and tangled; roots creeping, branches twisting, feet slipping. We’re following a forest elephant. Actually, we’re following a troop of mountain gorillas, but they’re running from the elephant and we’ve spent three hours tracing knuckled prints in the mud. Occasionally they appear on the next hill, a redolent surge of fur that brings excitement. But we’re always chasing, moving through the forest with an amateur’s clumsiness, unable to reach the world’s largest primate.

It feels like gorilla trekking should be this way in Uganda. The country rolls beneath a blanket chaos, every day coming with a raw and frenzied energy. Appear at a bus station and a thousand hands will direct you to the bus that’s leaving next, except they’re all pulling in different directions.

Take a rafting tour and the first 30 minutes is spend locating a puncture in the raft. Walk into capital city Kampala and thousands of women line the streets, all seated besides jumbled blankets of tomatoes and batteries, baskets and shoelaces, watch parts and bananas; always two bizarrely juxtaposed items, as if the pair automatically go together on a shopping list. This disorderly vigour inhabits all of East Africa, but not on Uganda’s magnitude.

I started in Jinga, a muddy town that cascades up the steep banks of the River Nile. Lavish slopes of green hang over the water, dotted by mud and thatch huts plus the occasional giant Coca Cola mural. Like the rest of the country, the earth is an exuberant orange. It sticks to my feet and shoes, an iconic reminder that I’m in Uganda. Even in the capital this layer of colour squelches between the toes.

It’s just one of many tones. Lake Victoria shimmers to the south of Uganda, bringing seductive shades of blue. Head north and the desert awaits with a thousand fragments of dust and rusty red. I headed west, rising into forested slopes that hang beneath peculiar volcanic cones. Uganda proudly markets itself a developed tourist destination. So I arrived in the west of the country expecting a tourist infrastructure – not just a man selling padlocks beside a sign declaring ‘HOWTEL’. 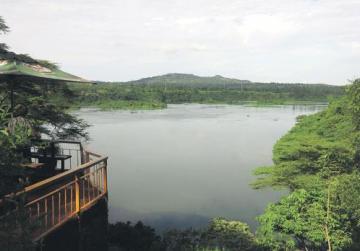 It’s in the far west that Uganda’s unique tourist attractions are found, tucked beside 5,000 meter mountains that separate the country from the Democratic Republic of Congo. Over half the world’s mountain gorillas live in Bwindi Impenetrable Forest, a menagerie of hippos and cats inhabit Queen Victoria National Park, and some of the world’s final chimpanzees are found in Kabale Forest. But this region feels ex-ceptionally rural and poor, unable to shake off the challenges of history. 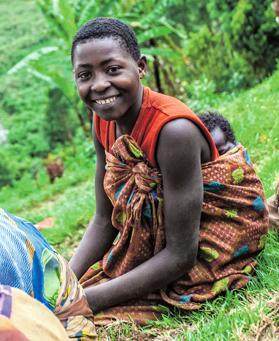 A local woman works in the fields, accompanied by her son. Photo: Pal Teravagimov/shutterstock.com

The unique wildlife has recently jumped onto East Africa itineraries. For four days I wallowed around Lake Bunyoni, moving between villages and islands on a dugout wooden canoe. Every dawn the chickens squawked, every afternoon the storm clouds arrived, and every sunset brought elegant silence. I hiked along narrow trails, drank endless bottles of coca cola, and had to be rescued by fishermen when my canoe capsized.

While gorilla trekking has been possible in Uganda for almost 20 years, researchers have recently habituated seven new gorilla families, opening up tourism on new sides of the park. A meandering road took me towards Bwindi and the gorillas of Rushaga, the valleys consumed by flickering layers of mist.

Buses don’t make it into Bwindi; the high altitude forest is virtually cut off from the rest of Uganda. The villages are exclusively made from mud brick and rumbustious cows block the road. Every time the landscape curved, I wondered how it was possible to have so many shades of green. 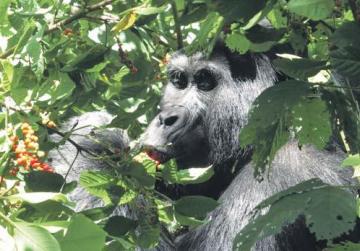 Trekking into the forest is a mesmerising sight. At least it was, but as the gorillas keep running from the elephant, I’m blinded by the sweat that tumbles across my face. Another hour goes by, my legs are tiring but the odd glimpse of black pulls me up precipitous slopes. I’m day-dreaming, resigned to always chas- ing them, struggling to see, when I practically walk straight into one.

A mother hugs a tree, gnawing at the bark, then turning to swing her arms in my directions. I’m shocked and scared and the guide has to grip my shirt to stop me from running back to Kampala. “Never step backwards,” he shouts. But that’s not easy when a two-meter ball of burliness punches her chest.

Every time the landscape curved, I wondered how it was possible to have so many shades of green

Officially, tourists are allowed to get as close as seven meters to the gorillas. As the guide pushes me forward, it can’t be more than three meters. A baby swings in the branches above my head, hesitantly picking at fruit and exploring with comic affection. Every second brings a new facial expression, another shot of emotion: confusion, surprise, curiosity, dislike, elation replaced by panic as the branch snaps and the baby gorilla falls from the tree. 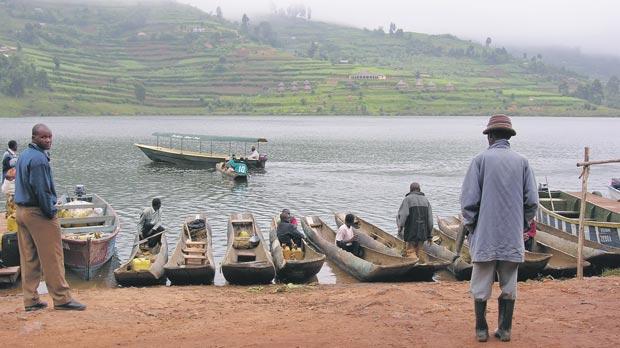 Now, I’m in the middle of the troop, a dozen gorillas feeding before my relentless camera shutter. I feel close enough to stretch out a hand and touch them. But I quickly stop the thought when the giant silverback snaps a thick branch between his fingers. 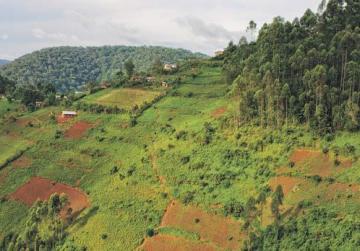 The landscape in Uganda is a rich, ever-changing green.

This guy is the troop’s leader, practically two metres high when seated and almost as wide. Lustrous fur shimmers around a pair of contemplative eyes, while almost human hands dextrously pulls across a tree to afford some privacy.

Another gorilla watches us, head resting against her knuckles and face switching from intrigued to bored. Two younger members feverishly tear away at tree bark; a mother’s eyes are marked by me-lancholy and two more get stuck in a tree, unsure of how to disembark.

While they can climb, these heavy primates are far more comfortable on the ground. It feels like hours have passed when the guide declares we must leave (officially you’re allowed an hour, but it’s definitely longer). I wave goodbye, noticing a degree of relief in the gorillas’ evocative expressions.

Like the rest of Uganda, there’s a deep sense that the experience is completely unscripted and unrepeatable, even if the gorillas see a group of camera snapping tourists every day.

Uganda brings this impression of untamed Africa, of a culture unafraid to express its thoughts and feelings. It’s a country that responds to a travel reverie about a whole continent. And in marching gorillas, it’s got a very unique reason to visit...