Grand Master Jean de Valette did not live to see the completion of the city that adopted his name but he will soon stand proudly within the historic walled citadel... or, at least, his statue will.

Although the final product will be made of silicon bronze, Mr Chetcuti first carved the statue in clay

A bronze effigy of the great man who carved out a new chapter in the island’s history will feature prominently in the new St Catherine Square later this year, a few metres away from where he had laid the foundation stone in 1566.

The 2.5-metre-high statue depicts the 49th Grand Master of the Order of Malta, wearing armour underneath a tabard, in motion, as if striding. He holds the city’s plan in one hand and the sword of victory in the other.

Sculptor Joseph Chetcuti, 52, said this was the image many had of the Knight Hospitaller, an illustrious hero who led the island through one of the greatest sieges against the notorious Ottomans.

Mr Chetcuti wanted to etch a feeling of gallantry and a sense of victory in the towering figure of de Valette.

He started working on the 750kg statue, which forms part of the City Gate project, in summer of last year.

“The sculpting process requires a lot of attention to detail and patience... you can’t hurry through or take any shortcuts,” he said, staring at the flowing edge of the Grand Master’s tabard and reaching out for a smoothening tool.

Although the final product will be made of silicon bronze (a mixture of copper, zinc and silicon), Mr Chetcuti first carved the statue in clay. The sculptor then shaped a plaster mould on the clay figure. The plaster mould was then used to cast a gypsum statue. A silicon mould was shaped on the gypsum statue and wax was poured into the silicon sleeve to create the third statue.

Pipes (colati) were stuck to the wax statue, which was later cut in three and covered in a flame-resistant material, known as grog. This was placed in an oven for a week and a half.

When the wax evaporated, bronze was poured in the three grog pieces. These bronze pieces were stuck together after the grog was removed.

The completed statue was refined and painted over for protection againstthe elements.

Mr Chetcuti studied at the Accademia di Belle Arti in Florence and the School of Art in Malta, He had set up a foundry about 20 years ago. 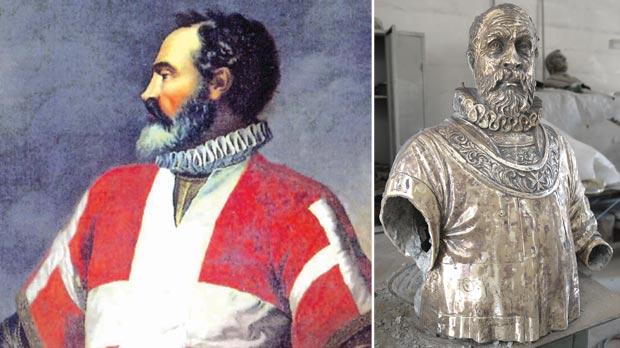 • As a Knight Hospitaller, joining the order in the Langue de Provence, he fought with distinction against the Turks at Rhodes.

• He became Grand Master of the Knights Hospitaller on August 21, 1557.

• As Grand Master, Valette became the Order’s hero commanding the resistance against the Ottomans at the Great Siege of Malta in 1565, widely regarded as one of the greatest sieges of history. He was 67 at the time.

• The siege lasted three months and he led the vastly outnumbered Christians against an Ottoman force of 30,000 soldiers and 193 ships.

• Universally referred to as La Valette he was never actually called that during his lifetime. He was simply Jean de Valette, nicknamed Parisot.

• After the siege, he commissioned the construction of the new city of Valletta in 1566, laying the first stone with his own hands. This took place on the slopes of Mount Sceberras, where the flower of the Turkish army had died.