There is hardly any other place in the world where you can encounter the art and culture of classical antiquity as closely as in the Munich collections on Konigsplatz. The Glyptothek houses one of the most important collections in the world of Greek, Roman and Etruscan art. Veronica Stivala took a walk around this fascinating museum. 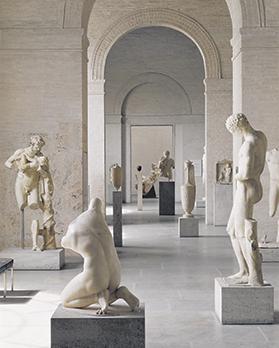 You’ll be forgiven for scratching your head over the meaning of the word ‘Glyptothek’. You see, the name ‘Glyptothek’ is a modern, made-up word. The word is an amalgamation of the old Greek words ‘glyphein’ (to sculpt) and ‘theke’ (repository), thus making it a storage place for sculptures. And what a storage place it is.

The long, high-ceilinged, vaulted halls in this museum in the centre of Munich’s museum district are in themselves impressive, but couple them with rows upon rows of Grecian busts poised on marble pedestals, many looking in the same direction and you have a museum quite like no other. The monochrome neutral palette that permeates the halls gives them an added eloquence, a certain grandeur if you will.

Visitors to the museum today will see a renovated version, as the building was badly damaged during World War II

Greyish stone slabs line the floors from which rise creamy brown walls, peaking in wide columns and grand arches. To this add light – the rooms at the Glyptothek are built around an open-air courtyard giving them access to natural light, that falls artistically on the statues’ curves, crevices and edges. 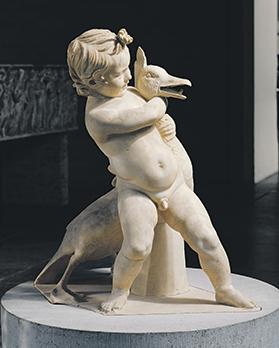 To walk along such hallways, populated with majestic marble statues that date as far back as 220 BC is humbling. So many figures look down, at or past me, silently, so still, a link to a very distant past of yore. The Ionic temple façade itself symbolises the plan quite clearly – with the Glyptothek, Crown Prince Ludwig, later to become King Ludwig I, wanted to erect a memorial to Ancient Greece.

The museum was originally built by architect Leo von Klenze. Between 1806 and 1830, when the museum was opened to the public, Ludwig managed to amass one of the most important collections of antique sculptures to this day. He acquired masterpieces such as the Augustus Bevilacqua, the Medusa Rondanini, which was highly admired by Goether and the Barberini Faun. It was thanks to Ludwig’s art dealer, Johann Martin von Wagner, that Ludwig managed to get hold of these extraordinary pieces. 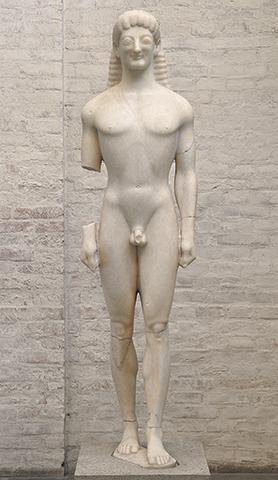 Wagner “combined an unerring eye for antique art with brilliant scholarly talent and great commercial aptitude”. So, in a very short time, between 1810 and 1820 an inventory of first-rate sculptures was created. This was subsequentlyenhanced with further specific acquisitions. Other noteworthy attractions also include the Kuoros of Tenea, the boy with a goose and the relief of the peasant with his cow.

The time period of the antique originals spans from the Archaic period (sixth century BC) through the Greek Classical period (5th/4th century BC) and the Hellenistic period (3rd to 1st century BC) right up until the Roman Empire and the Late Antiquity (1st-5th century AD).

Alongside the sculptures that, at one time, adorned sanctuaries and public places and buildings or served as funerary monuments, the marble sculptures in the Glyptothek also include numerous portraits of prominent ancient poets, philosophers and rulers, from Homer to Plato, from Alexander the Great to Augustus and Marcus Aurelius.

Visitors to the museum today will see a renovated version as the building was badly damaged during World War II. Prior to the damage, the halls in the building were adorned with colourful frescoes and magnificent plastering.

Curators who know both versions – the museum was reopened in 1972 – say that even though, today, the rooms are very different, they are just as impressive.

A word must also be said about the museum’s gorgeous café. Aside from its delicious cakes (baked with whatever sumptuous seasonal fruit there are around at the time), when the weather is fair, patrons can enjoy the beautiful courtyard, sipping their coffee and savouring a delectable sweet, while the white marble statues peek at them through the glass windows.