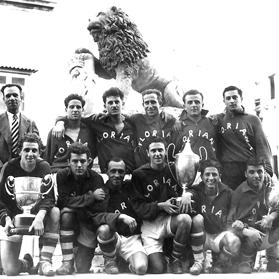 The 1949-50 championship developed into an all-out battle between Sliema Wanderers and Floriana.

This, of course, was no novelty but the first four campaigns after the war were characterised by the rivalry between Valletta FC and Ħamrun Spartans as the ‘Old Firm’ duo were still trying to find their feet after the shambles of the war.

The early exchanges saw one team, and then the other, take the lead in the championship race. This situation persisted until the long-awaited first round match between Sliema and Floriana on December 16.

The Blues had a very good blend of youth and experience while Floriana fielded a young team brimming with confidence.

Nothing, therefore, would have pleased each team more than a victory against their rivals.

Floriana kept the ball hovering menacingly near the Wanderers’ penalty area. The Blues struck back and Ġużi Camilleri sped past Leli Zammit and passed perfectly for Ninu Calleja to place beyond Ġużi Alamango’s reach.

The initiative now passed to Floriana who roared and raged for the equaliser.

Sliema’s defence held on and when the pressure diminished, they began to make headway. After a quarter of an hour, Jimmy McCormick floated a perfect pass for Tony Nicholl to nod home.

In the second period, the Wanderers, aided by the wind, saw more of the ball. It seemed that they would add to their lead at any moment when Floriana scored.

Pullu Demanuele shot on the turn to give the Greens’ a belated consolation goal.

The 2-1 win placed Sliema within a point of the Irish at the top of the table.

At this stage the competition was interrupted for the Christmas Tourney.

The league resumed on January 15, when the Spartans kept alive their dwindling championship hopes with a 5-2 victory over St George’s.

Floriana hammered Birkirkara United 6-0 and the next week Sliema stepped up the challenge with a fine 4-0 win over Hibernians.

On January 29, the Wanderers applied more pressure on Floriana with a 3-0 victory over Luqa St Andrew’s.

The following weekend the Greens were in action against St George’s. Nobody gave the Saints a chance.

Yet, although Floriana did 90 per cent of the attacking, they returned home empty-handed. St George’s defended grimly and it was in a rare breakaway that Salvu Romolo scored the winning goal.

The Wanderers were once again absolute leaders of the league table but, unfortunately for them, they failed to profit from Floriana’s lapse.

In fact, Sliema dropped a point against Valletta while the Greens beat Ħamrun 2-1.

Sliema condemned Birkirkara to a quick return to the Second Division when they beat them 2-0 as Floriana replied with a 2-0 victory over Hibs.

In their next game, however, the Greens threw away a precious point against Luqa who were rewarded for their plucky performance.

But it was a step backwards for Floriana especially since Sliema beat St George’s 3-1 on the same weekend.

The championship issue was decided on March 26 when Sliema met Floriana in what proved to be the league’s decider.

Floriana were far superior to their rivals and their devastating form in the first period was the mark of champions.

They opened the scoring after 35 minutes when Benny Camilleri hit first time into the net after a pass from Lolly Borg.

The second goal was scored by Demanuele when Lolly Rizzo failed to grasp the ball leaving Il-Koku to shoot inside an empty net.

With only two more matches left for the end of the competition, Floriana seemed to be home and dry.

On March 19, they trounced Valletta 4-1 and with Sliema slipping 1-2 against the Spartans, the championship race was as good as over.

On April 1, Floriana celebrated their first league championship in 13 years with a comfortable 7-1 victory over Birkirkara United.