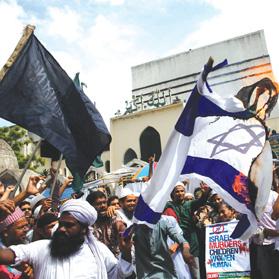 Protesters burn the Israeli flag during a rally in front of the Baitul Mukarram National Mosque in Dhaka.

Palestinian Hamas fighters once tried in vain to copy Israel’s iconic submachine gun, the Uzi. Twenty years on, their home-made rockets streak more than 100 kilometres from Gaza towards the northern Israeli city of Haifa.

The variety and range of its rocket arsenal – both closely guarded secrets – have steadily improved since Hamas Islamists emerged as an underground militant group in 1987.

Ahmed Jaabari – the chief of Hamas’s armed wing who was assassinated in an Israeli air strike in 2012 – masterminded the group’s domestic manufacturing capability that helped allow it, analysts say, to keep launching salvoes at Israel despite the Israeli-Egyptian blockade on supplies to Gaza.

A commander in Hamas’s armed wing said that before Jaabari rose to a higher military echelon in 1996, the group had only a small number of AK-47 rifles and a single rocket-propelled grenade.

What you are seeing today is not metal and power, what you see today is blood

“Jaabari upgraded Hamas’s capability from a rifle to a rocket that hit Tel Aviv; this is in brief what he did,” the commander, who declined to be identified, said.

In 2002 Jaabari succeeded the group’s chief commander Salah Shehada, whom Israel killed, along with his aide and 15 other civilians, when it bombed a residential building in Gaza City.

Now, in the worst outbreak of Israeli-Palestinian violence in two years, Israel’s military says it has hit Hamas’s rocket launchers and storage facilities hard. It made similar statements in previous flareups, but rocket fire from Gaza has persisted, in varying degrees, over the years.

Engineers and fighters repeatedly died in attempts to build and launch the rockets.

Hamas gauged the range of its first home-made rocket, the Qassam, by firing it out to sea before listening to Israeli news alerts and receiving reports from Palestinian spotters inside Israel, Hamas sources told Reuters.

Thousands of Palestinians and hundreds of its fighters were killed in an uprising that culminated in Israel’s evacuation of its soldiers and settlers from Gaza in 2005, and Hamas’s seizure of the coastal Strip from Palestinian rivals two years later.

The Israeli-built and partially US-funded Iron Dome defence system has shot many of the rockets destined for urban areas out of the sky. But Hamas takes pride in their upgraded firepower and the political toll they say it takes on the enemy.

“What you are seeing today is not metal and power, what you see today is blood. Thousands of people paid with their lives so that we and our people can see this day – the day Israeli leaders stood before their nation to say: ‘Sorry, Tel Aviv was hit’,” the commander said, speaking before the latest conflict.

Hamas and Islamic Jihad, another more militant armed faction, have announced new grades of longer-range rockets delivering heavier payloads in the latest conflict and boast of “surprises” from other, secret ordnance.

The Israeli military said last week it struck down a drone flying in its airspace which Hamas called the ‘Ababeel’ and described as its first bomb-carrying unmanned aerial craft.

“[The armed groups] have unveiled new rockets and launchers that they have made themselves: a development that makes the militants less dependent on rockets that are smuggled into the Gaza Strip to threaten Israel’s main population centres,” according to Jane’s Intelligence, a London-based consultancy.

Besides Israel’s tighter curbs on Gaza-bound imports since Hamas took power there in 2007, Egypt has demolished hundreds of smuggling tunnels through which weapons and commercial goods had been brought. Hamas lost an important ally in the Egyptian Muslim Brotherhood, which was ousted by the military last year.

Relations with Iran, widely believed to be a main patron for Hamas’s military wares, may also have suffered after Hamas refused to back Tehran’s ally, President Bashar al-Assad, in Syria against mainly Islamist rebels.

Reuven Ehrlich, an Israeli expert on militant groups, said Hamas’s Arab donors help to launder money for the movement – cash that is prioritised for military uses despite Gaza’s economic crisis.

“They are still getting money and the priority for the money they have is the military priority... The money has no smell, nobody can control how the money flows,” Ehrlich said.