Christian Ellul, president of The Association of Podiatrists of Malta, highlights how different forms of arthritis can affect the feet but says that early treatment can delay and even prevent pathologies. 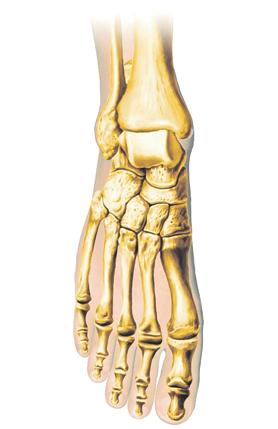 An image showing the complex bone and joint system of the foot. Photo: www.podiatry.org.mt

Our feet are a complex system made up of an extensive bony and soft tissue network synchronised in a way to give us the ability to walk upright on two legs and adapt to any surface and/or footwear we present it with.

Each foot is composed of 26 bones, one-quarter of all the bones in the human body, which articulate together through 33 joints. Arthritis characteristically affects joints and, as a result, the risk of having an arthritic manifestation in our feet during our lifetime is high.

The most common form of arthritis, osteoarthritis, often termed as overuse arthritis, is caused by repetitive micro-trauma, affecting principal joints in the body. Our feet, which experience the constant daily burden of our weight, often coupled by inappropriate footwear, notably in women, are a classical example.

In fact, out of all forms of arthritis affecting the feet, the most common is osteoarthritis of the first metatarsophalangeal joint. This leads to atrophic (bony) changes causing a visible enlargement of the first toe joint, leading to limited toe movement (a degree of big toe movement is essential for normal walking).

Apart from pain and swelling within the joint, limited big toe movement can lead to the inability for the first toe to move upward resulting in painful calluses and corns on the bottom part of the first toe. Wearing tight and high heeled footwear and activities requiring increased demands on the front part of the foot worsen the symptoms.

There are a number of conservative measures a podiatrist can offer. These can help control painful symptoms associated with first toe joint arthritis, and in the medium and long-term management should include orthotic therapy. Orthotics are customised insoles indicated for a number of biomechanical problems. In this case, they are manufactured in a way to increase function of the first toe and offload the joint, thereby reducing excessive forces acting on the joint.

Systemic arthritic conditions such as rheumatoid arthritis (autoimmune disease) and gout (caused by an elevation of uric acid in the blood), also often affect the feet.

The affects of rheumatoid arthritis on the feet may occur very early in the disease. In fact, in about 20 per cent of patients, foot and ankle symptoms are the first signs of the disease. Rheumatoid arthritis principally causes inflammation of the synovial fluid within joints and unlike osteoarthritis, which is often reserved to one joint, rheumatology patients experience painful symptoms across different foot joints on both feet including front part, middle part and rear part of the foot.

In the forefoot these may include bunions, claw toes and pain under the ball of the foot, broadly referred to as metatarsalgia. Dislocation of the lesser toes (second to fifth toe) may also occur at the advanced stages. At the level of the ankle in the rearfoot, the ankle alignment may change, causing a prominence on the medial side while at the midfoot the foot arch lowers, causing what is termed as ‘acquired flat foot’, due to weakening of ligaments and joint changes which can also lead to total collapse of the foot (medial) arch.

Although the changes experienced to the feet due to rheumatoid arthritis can be seen as overwhelming, nowadays early treatment – using aggressive pharmacological treatments and awareness on foot assessment and early use of custom orthotics and correct footwear – lead to a better prognosis, including reduction in painful symptoms and may delay and even prevent the foot pathologies noted above. An interdisciplinary approach is a must in this patient population.

Uric acid crystals deposited in joints cause gout, an acute form of arthritis. This leads to inflammation of the affected joint, resulting in redness, swelling and pain. Approximately 50 per cent of cases of gout affect the big toe joint in the foot. Pain within the joint can limit the ability of walking and is particularly more severe at night. Gout is caused by an elevation of uric acid in the blood and a simple blood test can diagnose the problem. Fortunately, medications such as non-steroidal anti-inflammatory drugs (NSAID’s) are very effective at reducing the inflammation and reducing the pain at the acute phase of the disease.

As part of the long-term management, elevated blood levels of uric acid are controlled through the daily intake of a specific medicine such as allopurinol. Dietary advice such as to avoid eating red meat, seafood and red wine is also important.