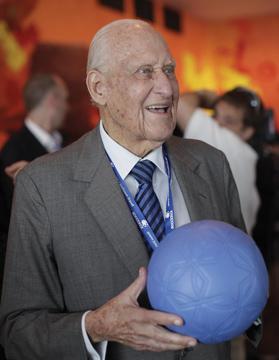 Joao Havelange has quit as FIFA’s honorary president while Sepp Blatter has been cleared of misconduct in the ISL bribery case, a report by FIFA’s ethics committee said yesterday.

The report described the behaviour of Havelange as “morally and ethically reproachable” in his dealings with ISL, FIFA’s former marketing partner which went bankrupt in 2001.

The report by Hans-Joachim Eckert, head of the ethics committee’s adjudicatory chamber, cleared FIFA president Blatter, who was secretary-general at the time, of any wrongdoing but added that his conduct had been “clumsy”.

A Swiss prosecutor said in a legal document released last July that Havelange, FIFA president from 1974 to 1998, and former executive committee member Ricardo Teixeira, took multi-million bribes from ISL on World Cup deals in the 1990s.

Swiss member of parliament Roland Buechel said at the time that FIFA needed to further investigate the actions of Leoz in the case.

FIFA subsequently set up its own investigation led by Michael Garcia, a US attorney who heads the investigatory chamber of the ethics committee.

“It is clear that Havelange and Teixeira, as football officials, should not have accepted any bribe money, and should have had to pay it back since the money was in connection with the exploitation of media rights,” Eckert’s report said.

“From money that passed through the ISMM/ISL Group, it is certain that not inconsiderable amounts were channelled to Havelange and to his son-in-law Ricardo Teixeira as well as to Nicolas Leoz, whereby there is no indication that any form of service was given in return by them.

“These payments were apparently made via front companies in order to cover up the true recipient and are to be qualified as “commissions”, known today as “bribes”,” the report said.

It added: “There are no indications whatsoever that president Blatter was responsible for a cash flow to Havelange, Teixeira or Leoz, or that that he himself received any payments from the ISL Group, even in the form of hidden kick-back payments.

“It must be questioned, however, whether president Blatter knew or should have known over the years before the bankruptcy of ISL that ISL had made payments (bribes) to other FIFA officials.

“President Blatter’s conduct could not be classified in any way as misconduct with regard to any ethics rules.

“The conduct of president Blatter may have been clumsy because there could be an internal need for clarification, but this does not lead to any criminal or ethical misconduct.”

Blatter said he noted the report “with satisfaction”

“I have no doubt that FIFA, thanks to the governance reform process that I proposed, now has the mechanisms and means to ensure that such an issue – which has caused untold damage to the reputation of our institution – does not happen again,” he said in a statement.