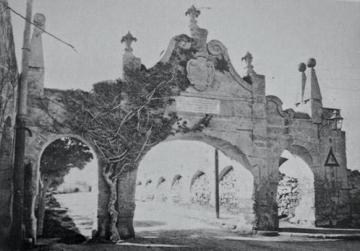 This is one of a very few such arms that remain intact in Birgu, although cement cast copies of L’Isle-Adam’s arms within a wreath and with the date ‘1533’ are known, including one next to the nymphaeum in the courtyard of the Magisterial Palace in Fort St Angelo. 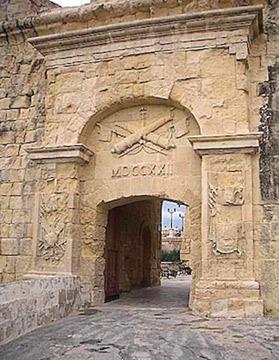 Two armorial shields were set on Birgu’s Advanced Gate at the upper left and right just under the frieze, but nothing of them remains other than the four eroded large stone blocks, two for each, on which they were carved.

Many such arms and escutcheons dating to the period of the Order of St John in Malta have been lost since Maltese globigerina limestone suffers due to weathering and deteriorates over time. Others are known to have been destroyed or defaced during the brief French occupation of 1798-1800 or as a result of World War II. Two particular arms were set on Birgu’s Advanced Gate at upper left and right just under the frieze, but nothing of them remains other than the four eroded large stone blocks, two for each, on which they were carved.

The arms featured by Bugeja are not the only of L’Isle-Adam that remain in the city. The Order’s first military hospital in Malta, or Sacra Infermeria, was erected at Birgu in 1532. In 1652, the hospital became the abbey of the cloistered Benedictine nuns, or the ‘Abbatija’, as it is known by the locals, which abuts the church of Santa Scholastica built in 1679 to the design of Lorenzo Gafà.

Another similar arms within a frame is found on the side of the abbey in Triq il-Miratur (formerly Observer Street), on the wall facing Triq Antika (Ancient Street) and which has since blended with the alveolar and other deterioration of the masonry. The design is identical to that of the arms featured by Bugeja, even though the shield and its frame had suffered under the chisel. However, the number ‘33’ on the lower right corner has survived.

Even if this escutcheon is not related to the arch, it would be a shame if it was to remain hidden in obscurity under this veranda

Originally, the extent of the Collachio was not restricted to the present Triq Hilda Tabone but further towards Misraħ ir-Rebħa and to the Post of Castille. At first floor level on the façade between houses nos. 6 and 7 in Telgħet il-Foss, there is another coat of arms set within a framed niche. Although slightly eroded and missing a small section at lower right of the base, the arms itself is intact and quite distinguishable. It consists of a representation of the Order’s white cross on a red field in chief, while on the shield are three roses emerging from the same bough, with two birds, presumed to be doves, facing the centre at upper left and right. Unfortunately, the arms are located at the cut-off point where a more recent building was erected, either due to redevelopment or an addition at this level when the previous building was destroyed during the war.

Another current topic of discussion is the building of a copy of the Wignacourt Arch that once stood as part of the aqueduct at what is now referred to as Fleur-de-Lys. From the designs of the structure recently in the media, the central escutcheons on either side are to be included. Although requiring certain magnification, contemporary photographs show that the escutcheon facing Valletta bore the arms of Grand Master Alof de Wignacourt. 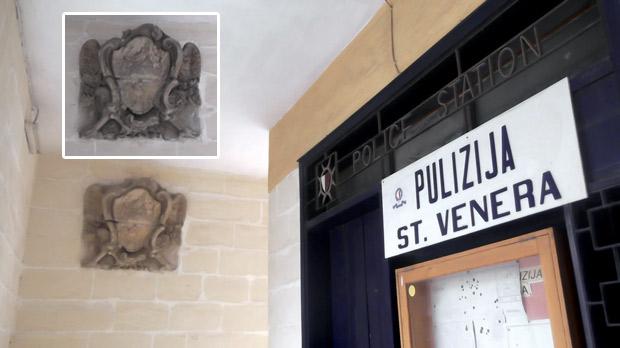 The presumed escutcheon of Grandmaster Emmanuel de Rohan on the outside the Santa Venera police station.

Hidden under the veranda by the Santa Venera police station is another escutcheon. Although defaced, missing the crown and with parts broken, the eagle supporter, apparent from the wings and tail, bears strong similarity to the arms of Grandmaster Emmanuel Marie des Neiges de Rohan-Polduc.

Since contemporary photographs of the Wignacourt Arch generally show the arch from the Santa Venera side, it is unknown whether this escutcheon was originally on the reverse side facing Mdina. Many grandmasters had the habit of placing their own arms and commemorative plaques on anything they restored or upgraded. St Lucian’s Tower, Marsaxlokk, was likewise originally built by de Wignacourt between 1610 and 1611and upgraded by Grandmaster de Rohan, who had renamed it after him and whose arms still adorn the façade.

However, even if this escutcheon is not related to the arch, it would be a shame if it was to remain hidden in obscurity under this veranda and not found a more prominent location. So why not somewhere on the new Wignacourt Arch?