Senglea, located on a promontory and nestled in the Grand Harbour at the head of a peninsula, is Malta’s smallest locality with an area of less than a square mile. The original town was built during the time of the Knights of St John in the 16th century and, in 1554, was named after Claude de la Sengle, the Grand Master who built it.

Throughout the reign of the Knights, bastions and forts were built on its perimeter facing Cospicua and Corradino Heights. Due to its resistance to the Ottoman invasion during the Great Siege of 1565, it has been given the title of Civitas Invicta (The Unconquered City).

L-Isla is the Maltese name given to this very traditional city, which is characterised by stepped streets and narrow roads. This name is derived from the Italian L’Isola meaning ‘an island’, which reflects its geography of being practically surrounded by the sea.

Indeed, Senglea was home to a large number of foreign sea­farers and merchants, who all left some of their folklore and customs. This particularly applies to traditions associated with Holy Week and Easter celebrations. These traditions live on in Senglea till the present day, evolving into practices celebrated with remarkable passion and dedication.

Easter is the centre and climax of the Church’s liturgical year. The word ‘Easter’ is of Anglo-Saxon origin, and was the name of the pagan goddess of the dawn, whose feast was replaced by the Christian Easter. In most European countries, the word for the feast is a variation of the Latin word Pascha, which itself is of Jewish origin, referring to the passing-over of the destroying angel and the Jews’ liberation from slavery in Egypt.

For Christians, the great Pasch is the transition from darkness, misery and sin to the light, joy and life of God, a transition achieved by Christ through his glorious resurrection from the dead.

Easter, therefore, is the greatest feast of the year; indeed, until the 12th century, each day in Easter week was a day of obliga­tion. The season of Easter, or Paschaltide, is continued by the Church beyond the feast of the Ascension to the last day of the octave of Pentecost, Holy Trinity Sunday.

In the early Church, controversy arose over the date of the Paschal feast. The question was resolved at the Council of Nicaea (AD 325) where it was decided that Easter should be held on the Sunday following the first full moon occurring on or after the spring equinox.

The celebrations of Holy Week and Easter are primarily of a religious character, taking place in churches where the faithful gather in large numbers to commemorate the passion, death and resurrection of Christ.

In Senglea, Good Friday and Easter are celebrated with zealous passion and unusual devotion at Senglea’s parish church, a basilica dedicated to the nativity of the Virgin Mary.

On Palm Sunday, the faithful participate in the liturgical rites that usher in Holy Week. The commemoration of the Lord’s entry into Jerusalem starts with the blessing of palm fronds and olive branches at the Oratory of the Holy Crucifix. Worshippers, carrying olive leaves, later walk in a procession towards the church where a solemn Mass is celebrated by the Collegiate Chapter.

Tradition has it that during the incident, the bearers either fell with the statue or hit the column of the statue of Our Lady Causae Nostrae Letitiae in the middle of Strada Vittoria on April 13, 1879. The custom of holding the procession was only resumed on April 6, 1969

Prior to Vatican Council II, during these sombre days, church walls and pilasters used to be covered with black damask. Likewise, all the paintings in the church used to be draped over in purple. Images of the crucified Christ were also covered.

Maundy Thursday commemorates Jesus Christ’s Last Supper with the Apostles. On this day, late in the evening – the eve of Good Friday – various families and groups carry out traditional visits to seven different churches so as to pay homage to the altars of repose.

Good Friday ushers in a sorrowful atmosphere, as churches are deprived of their traditional ornaments. In the afternoon, Christ’s passion is commemorated with a liturgical service followed by a solemn procession of eight statues.

Each of these statues, representing a particular episode in Christ’s passion, is carried by bearers. Between one statue and another, participants, dressed as biblical characters, take part in a dignified manner. 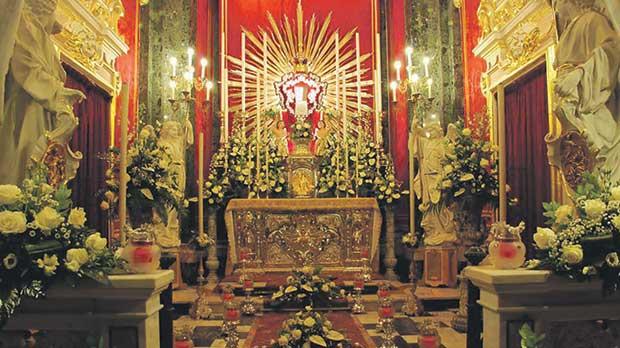 The altar of repose at Senglea basilica on Maundy Thursday.

Funeral marches performed along the route by the town’s band, La Vincitrice, enhance the sombre feeling as night falls. Indeed, visitors to Senglea’s Good Friday procession are immediately struck by the town’s historical and artistic legacy.

On the evening of Holy Saturday, a celebration to commemorate Christ’s rising from the dead is held at the basilica. This celebration, which heralds the Easter festivity in honour of the Risen Christ, starts in pitch darkness with the church illuminated only by flickering candle lights. Then, when the celebrant intones the Gloria, the church is swiftly lit up with candles, chandeliers, bulbs, and floodlights. Bells peal triumphantly as they break the night’s silence in order to announce Christianity’s central event – Christ’s resurrection from death. 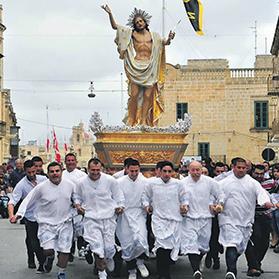 Running with the statue of the Risen Christ (L-Irxoxt) on Easter Sunday. Photo: Twanny Falzon

In the years prior to the Vatican Council II, Easter cele­brations started very early on Saturday morning. As the joyous pealing of bells in­toned the Gloria, it was cus­tomary, truly a rite of passage, for Senglea youths to jump into the sea at the Marina or Il-Ponta. The Gloria thus heralded the swim­ming season, in tune with Senglea’s long-standing connections with the sea.

On Easter Sunday, the church is embellished with red damask and adorned with flowers. These represent new life. Priests also wear their best white chasubles in celebration.

Easter manifests itself in a happier and festive mood. In mid-morning on Easter Sunday, a colourful procession with the statue of the Risen Christ is held in the town. The statue, which represents the last act of the passion of the Christ – Christ triumphant over death – is welcomed by applause from the crowd gathered on the parvis of the parish church and by the tolling of bells. The special lilting music provided by La Vincitrice, the local philharmonic society, adds to the merry, festive atmosphere. 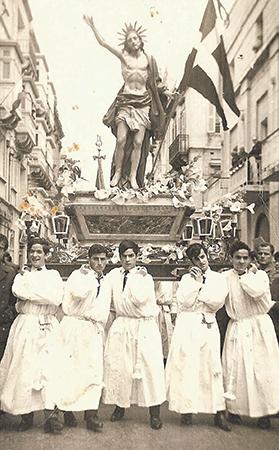 The statue of the Risen Christ being carried in procession on Easter Sunday, April 6, 1969. The statue bearers, from left, are Mario Schiavone, Anthony Debarro, Anton Schiavone, Charles Chircop and Victor Schiavone.

Ten bearers, each in white garb, carry the statue around the main streets of Senglea, accompanied by the band playing joyful music. Most people go along with the procession while others, mainly children, shower paper confetti from the balconies.

Most of residents and visitors look forward to these instances in the procession when the street is suddenly emptied, people crowd the footpaths, and cheer the runners on. This is an old Maltese tradition especially in the Three Cities – Vittoriosa, Cospicua and Senglea.

Naturally, throughout the Easter morning manifestation, the focus of attention falls on the processional statue of the Risen Christ.

The earliest documentation with regards to the Easter procession held in Senglea dates back to 1714. This clearly indicates that it is one of the earliest Easter processions ever held in Malta. In all probability, in the Senglea parish, it started at the same time as the Good Friday procession which, according to the parish manuscripts, was already being held some years prior to 1714. 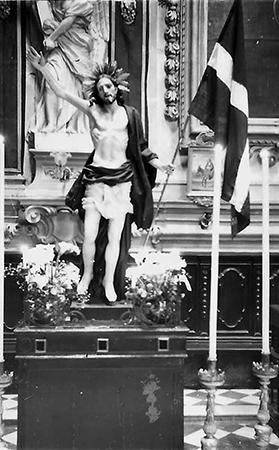 The statue of the Risen Christ displayed at the Oratory of the Holy Crucifix, Senglea, on April 22, 1962.

Senglea’s statue of the Risen Christ is quite unique in its composition. While its lower part is made of wood, the upper part is shaped out of papier-mâché. The obvious reason for this is that the statue, while being light enough to be carried around without undue difficulty, had to be solid enough to withstand the jolts it gets when the bearers run with it. All this leads us to conclude that from the very time this procession was conceived, it was already envisaged that bearers would run with the statue for parts of the route.

A curious instance is the fact that for some years the procession was not held. Parish manuscripts do not precisely specify what really happened and when. Nonetheless, one can assume that some unpleasant incident occurred which eventually led to the cessation of the Easter procession for many years.

Tradition has it that during the incident, the bearers either fell with the statue or else hit the column of the statue of Our Lady Causae Nostrae Letitiae, which was erected in 1816 in the middle of Strada Vittoria to commemorate the deliverance of the town from the plague of 1813. Though nothing can be proven beyond doubt, from comparison of written notes found in the parish archives, one can conclude that the incident with the statue occurred on April 13, 1879, when Canon Francesco Colombo was archpriest of the Senglea Collegiate. If this is so, the custom of holding this procession was interrupted for 90 years, since it was only resumed on April 6, 1969. 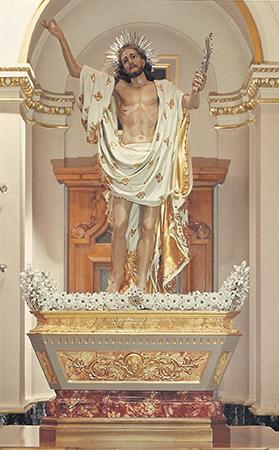 For those 90 years the statue was kept in its niche, alongside the other Good Friday statues, in the vestry of the Oratory of the Holy Crucifix. In 1962, following persistent pleas by the Senglea community, Archpriest Giovanni Carlo Burlò gave permission for the statue to be presented in the oratory and, in the following years, it was displayed in the basilica. In 1969, Archpriest Giovanni Sladden, after receiving permission from Archbishop Michael Gonzi, gave his consent for the procession to start being held again.

Towards the end of the 20th century, on the initiative of Archpriest Vincenzo Cachia, the statue was completely renovated. In 1989, alterations were carried out on the statue by artist John Pace. The statue and the plinth, in the form of a sarcophagus, were restored and gilded. Parts of the cloak of Jesus were also gilded. In that same year, a silver aureole was made by silversmith Giovanni Bartolo. A garland of artificial flowers was also made to surround the base of the statue. In 1994, Azzopardi Woodworks of Żebbuġ manufactured the new dais on which the statue stands, modelled on those of the Good Friday statues.

Tradition dictates that children carry their Easter sweet pastries (figolli) with them to be blessed by the statue of the Risen Christ. These pastries are almond-filled and made in the shape of a rabbit, lamb, fish or heart, and covered in icing sugar. Today, this typical Maltese delicacy associated with Eastertime seems to be giving way to Easter eggs.

In Senglea, the blessing of traditional Easter confectionery has been taking place for quite a number of years. It happens half-way through the procession, next to the church of Our Lady of Porto Salvo, popularly known as the church of St Philip Neri. For a short while the statue is lifted up on two wooden trestles, and children gather in front of it waiting for the archpriest to recite a prayer and bless their figolli and Easter eggs. This symbolic gesture adds to the celebratory mood.

The maritime city of Senglea glows, and its com­munity welcomes visitors on Easter Sunday to mingle with it and join in its joyous festivities abundant in ritual, history and tradition. Apart from a special family lunch, Easter day is traditionally marked with paying visits to relatives and friends, with whom one exchanges pleasant wishes and gifts.

During the Easter season, it being a time for renewal and awakening, priests visit households to impart the annual blessing to the families in their own homes. The occasion is a rich opportunity to convey the message of Christ’s peace and a valuable occasion for the family’s renewal of faith in the Risen Christ.