Hunters collected more than 104,000 signatures calling for MPs to make it illegal for minority rights to be abolished by referendum.

Three trolleys with boxes full of signed petitions were yesterday handed over to Parliamentary Secretary Michael Falzon after hundreds of hunters marched down Republic Street in Valletta.

The petition was the hunters’ response to another one collected by a coalition of green groups calling for an abrogative referendum to ban spring hunting.

The coalition collected more than 40,000 signatures, surpassing the legal requirement equivalent to 10 per cent of the electorate, to force an abrogative referendum.

But while the referendum signatures are subject to vetting by the Electoral Commission – a process currently under way – the signatures collected by hunters need not be verified since the petition has no legal value even if it may carry moral weight. 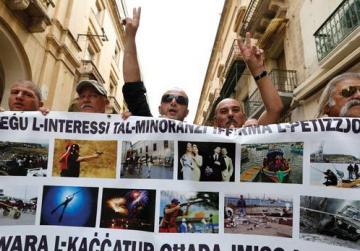 Hunters march down Valletta’s Republic Street carrying a banner that reads: “Protecting the interests of minorities, sign the petition here. After the hunter, it’s your turn.”

Hunting federation president Joe Perici Calascione said this was the largest ever petition presented in Parliament and expected MPs to conduct a serious debate on the matter.

“MPs cannot ignore the number of signatures collected that are equivalent to a third of the voting public and a quarter of the country’s population,” he said.

Asked what would be the next step, Dr Falzon was non-committal but said it would be arrogant for politicians to ignore such a petition. He will formally lay the petition on the table of the House today but this will not automatically lead to a debate unless an MP calls for it.

Mr Perici Calascione insisted the petition was not about hunting but minority rights. Referenda, he said, should be held on national issues that affected everyone and should not be a means to curb the rights of minorities.

“Today it is hunting that is being touched, tomorrow it may be something else,” he said.

The wording of the petition makes no reference to hunting and calls on Parliament to change the Referenda Act so that it will not be possible to hold an abrogative referendum that impinges on “the rights, privileges and interests” of minorities. 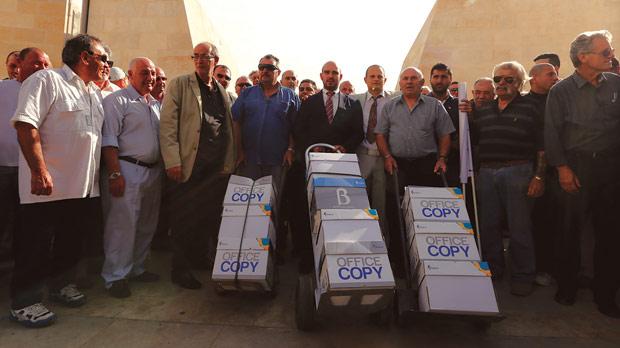 Boxes filled with petition forms at City Gate and, right, being taken into Parliament yesterday afternoon. 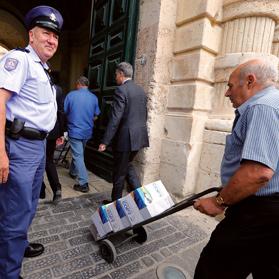 In a statement outside Parliament after the demonstration, Nationalist Party deputy leader Beppe Fenech Adami said the party did not agree with the FKNK request.

While reiterating the PN’s support for a limited and controlled spring hunting season, he said the petition presented by the FKNK sought to deny a civil right that allowed citizens to call for an abrogative referendum.

He said the PN was against any move to stop the abrogative referendum on spring hunting.

“While the PN agrees with a limited spring hunting season, it believes people should be allowed to express their preference in a referendum on the matter once this was requested legitimately by citizens,” he said.

Hunters gathered at City Gate and marched silently behind FKNK officials holding a banner reading: “Protecting the interests of minorities.”

The demonstration moved to St George’s Square where FKNK officials unfurled a large banner with the number 104,293 written on it as the crowd applauded.

On Facebook, Mr Engerer made it a point to note that 104,293 signatures amounted to more votes than the PN won in the MEP elections.

Meanwhile, the anti-spring hunting coalition said that if the petition submitted by FKNK represented “genuine support” for spring hunting, it would make for an interesting and lively debate in the run-up to a national referendum on the issue next year.