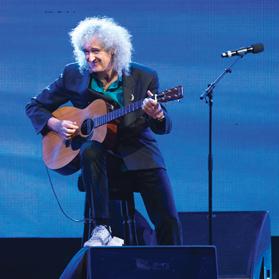 “What is it that makes us so thin-skinned about any justified criticism of our country?” Brian May who took a shot at hunting.

Last week, world renowned guitarist and animal rights campaigner Brian May had the temerity to criticise Malta’s primitive attitude to birds and our so-called tradition of bird-hunting and trapping. The hunters’ reaction and, disappointingly, that of the chairman, no less, of the Malta Tourism Authority was to castigate May for his “Colonial” (with a capital C) attitude and for treating the Maltese “as beings of a Third World country”.

This is not the first time that the hunters have brought Malta’s reputation into international disrepute in this xenophobic way. Two years ago, when the admirable Campaign Against Bird Slaughter, a German organisation, used a remote controlled aircraft to take pictures of illegal shooting and trapping by Maltese hunters the reaction was toxic.

It was not restricted only to the hunting under-class of Malta. We had an outpouring of xenophobic bile from Maltese of every class and standing directed at Germans and Germany which was unseemly and harmful to Maltese-German relations. It ranged from the displaying of Nazi swastikas on placards around the Maltese countryside, to slogans about gas chambers and comments on the killing of babies through abortion.

While the hunters’ reaction may be explained by their intellectual inability to articulate a cogent case in favour of their ‘sport’, reverting instead to insults and physical threats, there is little excuse for the rest. What is it that makes us so thin-skinned about any justified criticism of our country?

We have a civilisation stretching back 7,000 years and a brave history. We have been an independent, sovereign state for 50 years. With virtually no resources and only limited external support, we have managed to survive economically and thrive. We are justifiably proud of these achievements. Yet we act the victim and lash out at those who highlight our faults.

We have – like everyone everywhere – many faults. To name but three at random. Our driving habits are atrocious. The litter on our streets is appalling. And our hunters are a disgrace to a civilised country. We know all this. But when a foreigner tells us these things we react as though such criticism is unjustified. We throw it back in their faces by talking about abortion, or even in Germany’s or Britain’s case by harking back to some historic period long past, a distant memory to new generations of Britons and Germans.

We behave like petulant children stamping our Lilliputian feet whenever we are criticised by foreigners. What is so ironic, of course, is that it is these very foreigners who contribute so much to our economic well-being through tourism (which is why the MTA chairman’s comments were so crass and out of character), foreign direct investment, property purchases and by choosing to live in Malta. Is it our very dependence on them which leads to this love-hate relationship?

In the 50th anniversary of our independence, what a grown-up country should be doing is seeing the mote in its own eye, acknowledging openly that some criticisms are justified, and then doing something about them. We should have the maturity and self-confidence to take constructive criticism in our stride and not resort to sheltering behind an outraged sense of false nationalism. The fact that the ignorance, prejudice and thick skins of hunters are beyond redemption does not excuse the rest of us.

In Europe, this xenophobia (an intense fear and dislike of foreigners) is almost unique to the Maltese. Maltese who have lived in the UK, Germany, France, Belgium or elsewhere in Western Europe have found that their treatment in these countries is respectful, welcoming and non-discriminatory. Why is it then that we treat foreign visitors and the thousands of British, Dutch, German, Swedish and other EU and non-EU residents living in our midst differently?

Many are retired and have chosen to purchase properties and to live among us.Others are running major businesses here, providing employment and investment. Xenophobia manifests itself in Malta in so many different ways. From bridling at any imagined slight by a foreigner, to open insults at the culture and history of those who may have a different perspective on life, to the institutionalised xenophobia of the government administrative machine.

It is such a perverse phenomenon, since on a personal basis the acts of friendship and kindness shown by individual Maltese to foreigners are legion. At the individual level we seem to understand that the presence of foreigners here not only enhances our culture but also makes a massive contribution to our economy.

Why then, until recently forced by the EU to change its rules, did the government extract money through charging foreigners different rates for water and electricity and public transport fares, as well as discriminating against foreigners in so many other ways? We pride ourselves on our friendliness and on the warm welcome that we extend to visitors on the ground. And – with the exception of the hunters – this is generally the case. But when it comes to our treatment of those foreigners who wish to live and work here, the government machine presents a different face.

The way government departments treat foreign residents is a cause for concern. The inexcusable administrative cock-up which has marked the issue of e-residence cards by the Department for Citizenship and Expatriate Affairs has been disgraceful. It is indicative of an attitude of mind, demonstrated by successive Maltese administrations, that a process involving people who are paying guests in our country should have been dealt with in such an off-hand manner.

It fits closely with a pattern of behaviour in other fields. The inclination of so many government departments to publish their notices and instructions to citizens only in Maltese when this is formally and constitutionally a bi-lingual country (an added attraction to those wishing to set up business or to live here) is another. That many government departments do not in many cases write their circulars in both languages is unhelpful and discourteous to foreigners living or working here, as well as inefficient.

What is to be done to cure us of this xenophobia? The first thing is that we need to grow up. There is an urgent need for a change of attitude. This can only come about from education and political leadership. The forthcoming Independence Day celebrations, City of Culture 2018, the Presidency of the European Union, and the Commonwealth Heads of Government Meeting offer the Maltese the opportunity to show the world that they have finally become a nation that has come of age. A nation that is self-confident, a peoplecarrying no chips on their shoulders, earning others’ respect by no longer playing the victim and bridling at any imagined or real criticism of the way we are.

It does mean a culture change, being big enough to acknowledge that we are not perfect. And, moreover, showing thematurity to take steps to correct our shortcomings as a nation. The real overall winner will be Malta’s image as a country which is genuinely welcoming to its visitors, mature enough to take criticism in its stride, and to ensure that there is no hint of dislike of, or discrimination against, foreigners.