Shrouded in the mists of time, history, legend and miracles, and lying well below the din of traffic above, lies the subterranean crypt of Il-Madonna tal-Għar, a chapel carved into the hard, brown crust and soft, white-bellied Globigerina of the Upper Coralline Limestone layer.

It is not a natural cave but a chapel hewn into the rock through the great love of one man, a foreigner, a Sicilian, who was a regular visitor to the Sanctuary of Our Lady of Mellieħa. To fulfill his wish, he later erected a white statue of Our Lady holding Baby Jesus in her left arm at the far end of the chapel to complement the place.

Mario de Vasi was a Sicilian from Catania who traded in wine between Sicily and Malta. On his regular visits to the island he always went to Mellieħa to pay homage to the Blessed Virgin Mary in the sanctuary and eventually he grew so much devoted to her that he wanted to create another smaller shrine in her honour for the devotion of the many pilgrims who used to visit the sanctuary.

In 1644, despite the very uneasy times due to the constant attack by pirates, De Vasi paid for a small sacristy to be cut into the rock behind the holy icon in the sanctuary. Others maintain that he also paid for a new painting or for the restoration of the painting in the ceiling of the sanctuary showing the Eternal Father surrounded by a group of bishops, who according to tradition had consecrated the place as a church in the fifth century AD.

At this same time, the records of notary Vincenzo Tonna give us a very detailed account of a contract signed on Sunday, February 21, 1644, between De Vasi and Capo Mastri Domenico Baldacchino and Giovanni Pietro Xichluna for the latter to carry out various works, including a passageway leading down to a source of spring water and eventually to a subterranean crypt very near to the Sanctuary of Our Lady of Mellieħa. 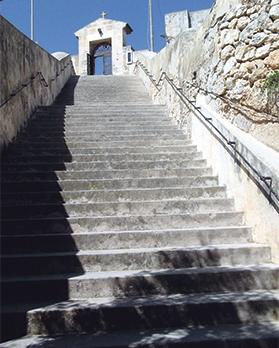 The first flight of 26 steps leading down to the underground chapel crypt.

They had to go down 26 steps to the first middle landing and another 26 steps before turning abruptly left to enter the underground tunnel leading further down into the chapel-crypt incorporating the fountain, which had to be 30 palms high and 22 palms wide. The subterranean chapel was constructed exactly as agreed and eventually became known as Il-Madonna tal-Grotta or tal-Għar.

With such an extensive low coastal area stretching eastwards from Ċirkewwa, all around the Aħrax Peninsula, the whole of Mellieħa Bay and almost as far as Mistra Bay, the small scattered settlements, mostly following farming activities in the fertile valleys around Mellieħa, faced frequent raids and attacks by pirates and sea robbers.

On Sunday, July 6, 1614, these small communities of farmers experienced a vicious attack on their belongings, and the Sanctuary of Our Lady of Mellieħa was no exception. In spite of the brave resistance by the rector of the sanctuary and some farmers, the holy icon of Our Lady was severely damaged in various places, especially in its lower reaches. Three stone statues, two of Our Lady and another of St Joseph, were beheaded by the Turkish raiders, and in time they found themselves in the underground crypt as grim reminders of the cowardly attack.

Many places of a historical or religious nature in Malta, very much like others of a similar nature scattered along Mediterranean countries, tend to have some story or legend associated with them. Most of them were merely invented but others were possibly based on something much smaller and then blown and coloured almost into reality.

The underground chapel of Il-Madonna tal-Mellieħa also has its picturesque side. The following are three short lovely legends connected with it.

Regarding the fact that one has to go quite a long way down to reach the chapel, one legend says:

(If you count the steps going down and then count them again coming up, your totals will not match)

It is pretty difficult to count them going down because of several landings that mix you up, but it is definitely even harder to count them coming up for obvious reasons. The next time you come to this chapel in Mellieħa, try it.

Over the years thousands of pilgrims have visited this holy underground shrine and prayed to Il-Madonna tal-Għar, attributing to her many miraculous interventions and healings, both spiritual and temporal

Another legend says: “The white stone statue of Our Lady with Baby Jesus was taken up from this chapel to the sanctuary on three different occasions and each time they found it back in its original place in the underground chapel. After that, they left it there in peace.”

A third legend relates how: “For some reason or other, some young ladies went inside the spring water galleries that run around and behind the chapel and they never came back. No traces of them were ever found.” 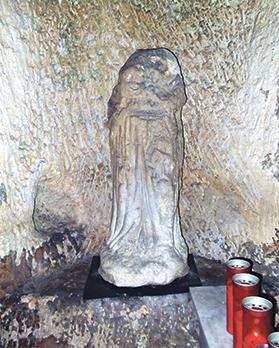 One of the statues of Our Lady beheaded by Turkish raiders that were placed in the crypt as a grim reminder of the cowardly attack.

However, going back to the chapel’s devotional aspect, over the years thousands of pilgrims have visited this holy underground shrine and prayed to Il-Madonna tal-Għar, attributing to her many miraculous interventions and healings, both spiritual and temporal.

Of special note are events that were recorded in 1887, 1888 and 1948, when various groups of people on different days and times of day, were gathered there to pray and they saw the white statue of Our Lady repeatedly moving her right hand vertically and perpendicularly, making the sign of the cross.

In the sanctuary archives there are 13 different documents that attest to these happenings. They bear a very detailed description of each occurrence and are signed under oath by all those present.

The first occurrence happened on August 2, 1887, when Sargeant Major Vittorio Gauci declared that he saw Our Lady moving her arm up and down at three different times on the same day. The same happening was witnessed on August 13 by 10 different people and again on the same day, another two people, including the parish priest of Mellieħa Rev. Francesco Magri, experienced twice the same phenomena.

Eight similar viewings were reported between August 18 and 30 of the same year by people from all over Malta from all walks of life. During their prayers these pilgrims often described their experiences with Our Lady as: “...fare un segno de croce in forma di benedire avendo umilmente pregato in quell’istante la Sua benedizione...” or “...le dita muoversi e distanziarsi l’un dall’altro specialmente il pollice...”

Another well-documented episode happened on September 20, 1887, when Rev. Luigi Farrugia and his two brother priests from Valletta, after having said Mass in the sanctuary, went to visit Il-Madonna tal-Għar and took some spring water from there. When they returned home in St Julian’s Luigi made the sign of the cross on his sister Maria Carmela’s brow with it. She used to suffer from nervous attacks, followed by sharp movements of the head and severe headaches. Luigi declares that his sister was immediately relieved of her pain and within two months no further signs of her illness were visible any longer. 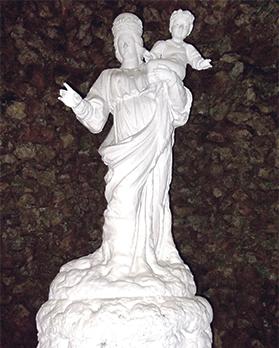 The white statue of Our Lady holding Baby Jesus in her left arm. In the sanctuary archives there are 13 detailed documents attesting to occurences when Our Lady and/or Baby Jesus were seen moving their arms to make the sign of the cross.

These miraculous happenings spread like wildfire all over Malta, and on November 20, 1887, Bishop Fra Antonio Buhagiar, together with the clergy and a multitude of people from all over Malta and Gozo, led a pilgrimage to the subterranean chapel and sang a solemn Te Deum in thanksgiving.

On the same day a similar Te Deum was sung in all Maltese churches because the cholera outbreak had ended. The epidemic had started on August 1, 1887, and by September 24 it had killed 236 people and another 397 were infected. Other such instances were recorded as happening on April 20, 1888, and on May 14, 1889.

During a visit to Il-Madonna tal-Għar on March 20, 1893, Fr John M’hale, SJ, and another Jesuit priest, together with a group of 50 14-year-old students on a driving expedition to Mellieħa, saw: “...Our Lady’s right hand moving slowly. Then even Baby Jesus’s right hand moved. It blessed the whole group by making the sign of the cross. Baby Jesus’s head moved gracefully whilst the expression on his face was one of happiness...”. Fr M’hale confirmed all this in a most exhaustive, long publication, describing in detail his and the 50 students’ experiences, who all acknowledged the movements which lasted for about 30 minutes.

There was another such visit by Fr M’hale. It is worth mentioning here that one of the boys present at the time was a Protestant named Frederich Clothier. At the age of 82 he returned to Malta to fulfill his great wish of visiting Il-Madonna tal-Għar again. He had become a Catholic, and while revisiting the underground chapel, with tears in his eyes he recounted all that had happened there so many years earlier.

The last time a similar occurrence was reported was after World War II, in 1948, when a group of 10 people declared, again under oath, that they saw the white lady of the chapel moving her right hand.

All these miraculous happenings in such humble surroundings should not remain hidden in the underground chapel of Il-Madonna tal-Għar but must be treasured in our hearts. The thousands of pilgrims who regularly flock to Mellieħa to visit her are a living example of this, and in spite of the journey and the difficulty to reach the crypt they still come, bringing with them baby clothes, candles, letters and hundreds of other small votive offerings, but of great sentimental value, to pay homage to Our Lady Mary, the Theotokos, the Mother of God.