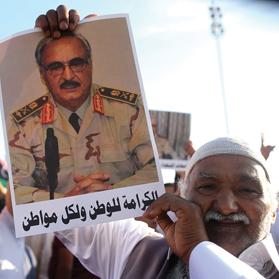 A man holds a picture of Khalifa Haftar during a demonstration in support of Operation Dignity in Benghazi last year.Photo: Esam Al-Fetori/Reuters

Even as the Islamic State rises further in Libya, looming ever closer to southern Europe, there is a widening arms race to supply the various sides, namely Tripoli, aka Libya Dawn, and Tobruk, aka Libya Dignity.

The suppliers, who seem to be ignoring the UN arms embargo, are actively trying to get around the embargo regulations in one form or another. The situation is complex and needs to be simplified to understand all aspects clearly including the potential impact on Malta.

The United Nations embargo on Libya, as implemented by UN Security Council resolution 2174, specifically determines that any party that wishes to supply arms to Libya can only do so if it is to the “recognised authorities”, which rules out Libya Dawn. That fact means that Malta needs to be careful who exactly it is dealing with in the respective embassies of the two Libyas.

This is why the United Nations, the United Kingdom and the United States all want a unity government formed before the arms embargo is lifted. The “love-fest” these three have with Tripoli’s General National Conference while ignoring the legitimate demands of the internationally-recognised Tobruk’s House of Representatives is stomach-turning.

The recent statement by the British Ambassador to the UN, Lyall Grant, incensed the Tobruk government when he said, inaccurately, that it was only the Misratan militias that were fighting Isis.

Tobruk Prime Minister Abdullah Al Thinni was also so upset at the decision by the UN to reject his request to be allowed to import arms that he pulled his government out of any Western-led UN talks for now. One consequence of this is expected to be the resignation of UNSMIL’s Bernardino Leon in the very near future.

Perhaps the news about the “confidential meeting” in Tunis on February 15 between the UN, the UK, the EU and the US with key Libyan players from Tobruk exposed Western intentions, one of which was their insistence that Khalifa Haftar be removed from his post.

For Tobruk, the West needs to recognise that the elections for the House of Representatives were fair and democratic. According to social media reporting, one speaker stated that “the loser goes into opposition, and argues from there, (and) not take up arms!”

Interestingly, Tripoli appears to be asking Ukraine for weapons help in the meantime. Throughout February, a leading member of the Islamist Libya Dawn group, Abdurrahman Sewehli, along with other Tripoli officials, travelled to Kiev to discuss their requirements. That’s illegal.

Importantly, Abdelaziz stated: “We hope that this [military] cooperation will continue in two main areas: in the field of education and training of Libyan national [military] personnel and the provision of modern weapons to Libya.” That’s legal.

The timing of Tobruk’s legitimate search for help is seen in Russian President Vladimir Putin’s visit to Egypt almost a month ago. Senior Libyan army officers were in Cairo for the meetings between the Kremlin officials and Egyptian President Adel Fattah El-Sisi.

The linkages between Russia and Egypt in military equipment and intelligence, made all the more important by the presence in Egypt of Russian Foreign Intelligence Service chief Mikhail Fradkov and his colleagues over the past year, is robust and that this assistance is being fed and is intended to help Tobruk is undeniable.

Russian military equipment is perfectly suited for Egypt’s strategic and tactical plans against Isis, in fact any terrorist groups in Libya, in cooperation with the Tobruk government.

It is important to note that Dignity’s founder, Haftar, was recently appointed supreme commander of the Libyan Armed Forces by the Tobruk authorities.

The urgency of Cairo’s requirements in the Sinai against the Isis Vilayet, led by Ansar Bait al-Maqdis, cannot be understated. Egypt’s $5.9 billion announced purchase of 24 French Rafale fighter jets and a frigate is also illustrative of what is becoming a Franco-Russian support network for Cairo and that indirectly includes Tobruk.

Russia’s deal with Greek Cyprus for two naval facilities for counter-terrorism and counter-piracy operations in the Mediterranean is part of the necessary response to the Libya maelstrom. The Kremlin is deeply interested in securing the Mediterranean littoral along with France and Italy and helping the government in Tobruk.

Russian participation in Libya’s naval blockade would be “a welcomed development”, according to Egypt’s Foreign Minister, Sameh Shoukry.

Clearly, the Libyan situation is complicating a number of other strategic situations that are edging towards an escalation ladder and bringing into sharp relief geopolitical alignments.

All sides need to be careful. Specifically, Malta is a principal point of impact because of its strategic location.

Although the statistics for 2014 are not available, Malta issued 33,619 visas to Libyan nationals in 2013. The visa regime for Libya will become more complicated and, given that most analysts believe that Isis members will be able to secure visas through Dawn-controlled Tripoli or infiltrate through refugee flows, this means immediate stricter border controls in Malta are necessary.