Khaled Khalifa might also take part in the Malta Mediterranean Literature Festival – if the authorities allow him to leave Syria. He tells David Schembri about the novels that got him banned in his home country. 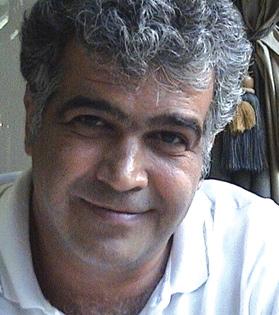 Interviewing a Syrian writer can be less straightforward than one might think. First, up came the language barrier, swiftly dismantled by the festival’s organisers, Inizjamed, who provided a translator for Khaled Khalifa’s Arabic.

When Khalifa’s answers finally arrived, they were accompanied by an apology for the tardiness. “We were offline.”

Three words which bring home the reality of living and writing in Syria. Three words which remind us that the Khalifa signing an e-mail on my computer screen is the same Khalifa who last year was beaten by a group of five men as he walked in the funeral procession of Rabi Ghazzy, a musician friend. Ghazzy had been shot in the head.

It is the same Khalifa who has been barred from overseas travel for the time being, whose book In Praise of Hatred cannot be sold in the country he writes in and about. Having no internet access sounds trivial in this context.

And yet, this is the same medium Khalifa used – through a translator – to write an open letter to the world, the first sentence of which read: “I am writing to inform you that my people are being subjected to genocide.”

That letter was typed in February last year, before the attack made it hard for him to type, as he had told the LA Times after.

Over a year later, Khalifa says much of the damage has been repaired, save for some leg nerves which need medical attention. While most of the writer’s injuries might have healed, Syria is in a worse state than ever; its cries of pain ignored. In a similar interview in 2011, Syrian poet Rasha Omran had told this newspaper that the international silence on Syria was “deafening”.

Two years on, Khalifa agrees: “I’m afraid that a ‘fully-destroyed Syria’ is required before any international intervention to end the tragedy of the Syrian people takes place. The world will regret leaving Syria sink into this destruction and this quagmire.”

He believes his role as a writer is to expose and reveal what is going on in his country.

“We did not keep silent even though we live in conditions which are, to say the least, inhumane. The world would not believe the size of the calamity and destruction here.”

This burden is made heavier by the fact that Khalifa cannot see himself doing anything other than write.

“Sometimes I feel scared just to think that I’ll stop writing. Such dark ideas haunt me when I finish writing a new novel, especially after sending it to the publisher; I feel completely drained and there is nothing left to be told or done. Now, after so many years of professional writing, I have become wiser than to squander my raw materials, and I think my life would stop if I stopped writing.”

As a novelist, Khalifa is resolutely Syrian. His 2006 book In Praise of Hatred is set in Aleppo of the early 1980s, another painful period in Syria’s history, and explores the topic of fundamentalism through the eyes of its unnamed female protagonist.

Aleppo in the 1980s is not much different from Aleppo a couple of years ago, and the book’s translations – of which there are seven – started coming out with the Arab Spring.

A cruel coincidence, given that most of the atrocities that happened in the 1980s have been repeated by the regime 30 years on.

“What is happening now is a widespread revolution. Describing it, or turning it into a civil war, would not save the regime and its allies,” Khalifa says.

His latest novel, No Knives in the Kitchens of this City, talks about Syrian sorrow and ruin during the past 40 years; it was published by Dar Al Ain in Cairo, Egypt, not Syria.

“I think of Syria as the best place to publish my books, but I am deprived of this right. In Praise of Hatred is still banned. I think No Knives in the Kitchens of this City is also barred. I still dream, though – believe that my dream will be realised soon – that my books will be displayed in all Syrian libraries,” the writer says, hope ever present.

His fearlessness in the face of terror is a characteristic he claims is shared by all Syrians – after a while, one gets used to death hiding round every corner.

“The fear is gone from the heart of all Syrians,” Khalifa says. Syria, he says, is a true example of a violated history.

“Syria has been violated for years and years, but she still retained her original deep spirit as home of many cultures that had been a key partner in human civilisation,” Khalifa says.

“Syria paid and continues to pay dearly for its place in the heart of the world.”

And is there hope for Syria?

“Why live if there is no hope? I am very confident and quite sure of the goodness and civility of the Syrian people, and their love for work. The regime and terrorist groups will never be able to turn the clock back,” the writer says.

“Syria has no choice but hope.”

The Malta Mediterranean Literature Festival will be held on August 29-31 at the Msida Bastion Historic Garden, Floriana.

The writers will be in Malta throughout the last week of August to take part in the Literature Across Frontiers Malta Literary Translation workshop.

They will be translating each other’s works into their languages and reading some of these translations during the three nights of the festival.

This year’s festival will also feature an art installation by Pierre Portelli on the theme of fresh water, which is also being discussed by Nathalie Grima and Virginia Monteforte in interviews.

Jazz duo, of Joe Debono on piano and Charles ‘City’ Gatt on percussions, will be playing on Saturday night. Jes Psaila (piano), Justin Galea (voice, instruments), Michael Galea (drums) and Tsead Bruinja will be performing on Thursday and Friday.

The festival and literary translation workshop are part of the Literature Across Frontiers initiative, which has played a crucial role in the setting up and development of the annual workshop and festival.