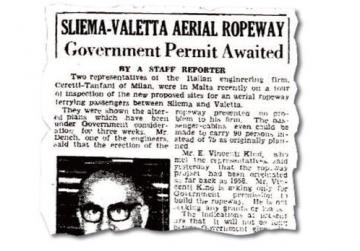 How Times of Malta reported the story in 1964.

Do you fancy shopping in Valletta and catching the cable car to Sliema for a coffee at The Strand?

It could have been possible in the early 1960s had the government given Maltese entrepreneurs the go-ahead to build the infrastructure.

Details of the proposed development, referred to as the aerial ropeway, are found in a 1963 Cabinet memorandum dated June 28.

The memorandum forms part of the secret Cabinet papers released last month for research purposes and which became available last week at the National Archives in Rabat.

The project was first proposed in 1958 by Edward Vincenti Kind.

But according to the memo, it had been turned down by the government in 1960, mainly on aesthetic grounds and because it was not economically viable.

The developers did not give up and re-applied for permission a few years later under the Nationalist administration of George Borg Olivier.

The three-page memorandum prepared for Cabinet by the infrastructure ministry gave details of the project that would have seen St Anne’s Square in Sliema connected via cable car to Hastings Gardens in Valletta.

A month after the memorandum was presented to the Cabinet, ministers agreed that the project would be considered as soon as the applicant submitted detailed drawings and plans of the project.

The decision had been remanded but a news report that appeared in March 1964 in Times of Malta quoted Mr Vincenti Kind saying indications were that the government was soon to give its decision on the permit.

The developer had changed the original plan to put the Sliema-side station in St Anne’s Square and instead shift it onto a platform built over the sea at The Strand.

This had been one of the conditions recommended in the Cabinet memo since the ropeway infrastructure at St Anne’s Square would have disrupted the two kiosks situated there, blocked the entrance of the Majestic Cinema and disrupted parking and taxi stands.

But the memo also gave a detailed breakdown of the ‘planning process’ at the time that included objections and recommendations from interested parties.

The ropeway would have passed across Marsamxett Harbour, passing over the tip of Manoel Island where a supporting pylon had to be erected. A 61-metre-high steel structure (the chimneys for the BWSC Delimara power station are 45 metres long) had to be built at The Strand and the ropeway was just over a kilometre long.

The memo said that a Cologne-based German company with experience in the field estimated the project would employ between 10 and 11 men per shift.

The fare would be subject to government approval but the developers suggested it be three pence for passengers on a monthly subscription and “somewhat higher” for passengers who travel occasionally.

The British naval authorities had no objection provided there was a minimum clearance over the harbour of 150 feet (46 metres).

The Antiquities Committee also did not object as long as the Valletta-side station would not be less than 10 feet (three metres) from the bastion.

The Aesthetics Board said it would not object if the government considered the project “economically desirable and in the national interest”. But they did ask to be consulted on the plans to minimise any visual impact the project might have had.

The only objection recorded in the Cabinet memo was that of the General Transport Union that represented bus owners.

The union argued the public was well served on the Valletta-Sliema route and a ropeway would be detrimental. It also warned that a reduction of service on the route would result in lay-offs of drivers and conductors. However, the Police Commissioner, who at the time was ultimately responsible for setting bus routes, doubted the union’s claims and argued that “competition would be legitimate”.

The memo listed three conditions that would have to be included with the permit if ministers eventually gave the go-ahead: the developers had to abide by recommendations of the Aesthetics Board; the Sliema-side structure had to be erected on the seabed; and the developers would have to dismantle the infrastructure if the service failed.

Eventually, nobody had to dismantle anything because the ropeway never materialised and the only direct link between Sliema and Valletta today is a ferry service.

They were the lasting legacy of World War II, cautioning people not to touch bombs or missiles that may wash ashore.

But in 1963 with the hotel industry starting to take off, the Malta Government Tourist Board argued the notices were “not desirable from the tourism viewpoint”.

The board wanted the notices removed because they were an eyesore.

The Police Commissioner, who had suggested erecting more of these signs, had washed his hands off the subject, saying it was up to the government to determine whether the notice boards should be removed.

The matter made it to Cabinet and in a memorandum penned in May 1963 the tourism minister sought council from his colleagues.

While acknowledging that the discovery of bombs on beaches was a rare occasion, he noted that a year earlier some anti-personal mines appeared at Baħar iċ-Ċagħaq.

The question posed by the minister was whether the message was actually heeded when a “strange object” appeared.

“The person in his right senses will not tamper with such object and the fool will always do so no matter how many notices we put up,” the minister said.