They said militants fought their way into the base on the edge of Muqdadiya town, 80 kilometres northeast of the capital. The northern side of the town was already under their control before yesterday’s clashes.

The area around Muqdadiya has seen sustained fighting in recent weeks since fighters led by the hardline Islamic State, an offshoot of al-Qaeda, seized the northern city of Mosul and swept south towards Baghdad.

The security source said the insurgents yesterday included hundreds of non-Iraqi Arab fighters, heavily armed and some riding in tanks. Negotiations were underway involving local tribal sheikhs for a truce, the source said.

A local official confirmed the militants had breached the site, although he said they would be repulsed. “They were able to control part of the base but we will retake it from them,” he said, requesting that he not be identified.

Thousands of volunteers have signed up to join militia forces fighting alongside the army and security forces, many of whom retreated or threw off their uniforms in the face of the initial militant offensive.

Meanwhile also yesterday the UN atomic agency said it believed nuclear material which Iraq said had fallen into the hands of insurgents was “low grade” and did not pose a significant security risk. 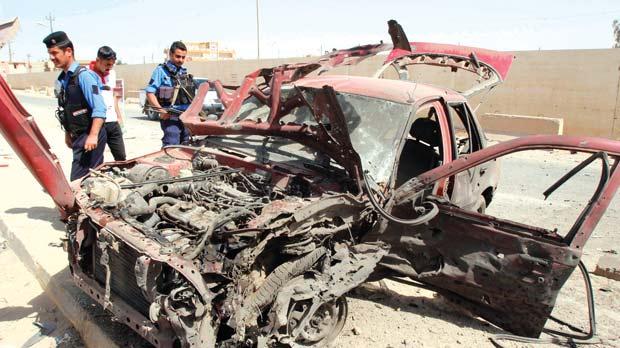 Policemen inspecting a destroyed car after a car bomb attack near a police station, south of the city of Kirkuk, yesterday. At least eight people were wounded in the attack, police said. Photo: Reuters

Iraq told the UN that the material was used for scientific research at a university in the northern town of Mosul and appealed for help to “stave off the threat of their use by terrorists in Iraq or abroad”.

Iraq’s UN envoy this week also said that the government had lost control of a former chemical weapons facility to “armed terrorist groups” and was unable to fulfil its international obligations to destroy toxins kept there. An al-Qaeda offshoot, Islamic State in Iraq and the Levant, took over swathes of Syria and Iraq before renaming itself Islamic State in June and declaring its leader caliph – a title held by successors of the Prophet Mohammad.

The UN International Atomic Energy Agency “is aware of the notification from Iraq and is in contact to seek further details”, IAEA spokeswoman Gill Tudor said.

“On the basis of the initial information we believe the material involved is low grade and would not present a significant safety, security.”