The iconic cave-church of St Leonard (L-Għar San Anard), located in an idyllic oasis of unspoiled old Maltese rural charm at Wied Liemu (also known as Wied il-Lunzjata), limits of Rabat, is a site of notable artistic and archaeolo­gical interest meriting the highest degree of protection.

It is in many ways the finest surviving example of a late medieval rock-cut church dating to before 1418, when its cult was sufficiently well established to give its name to the district, which was recorded as ‘Sancto Leonardo’ in the testament of the Royal Kinswoman Donna Margarita d’Aragona, who owned the land.

Devotion to St Leonard, hermit saint of Noblac, was introduced by the Normans to whom he was one of the great saints because of the belief that it was through his intercession that Bohemund was freed from Muslim captivity in 1103. This established his reputation as Patron Saint of Captives and Slaves. In Malta, he enjoyed remarkable veneration. A church was dedicated to him in Kirkop, and in the church of Ħal Millieri his monumentally rendered image occupies the place of honour to the right of the altar in the cylindrical apse. 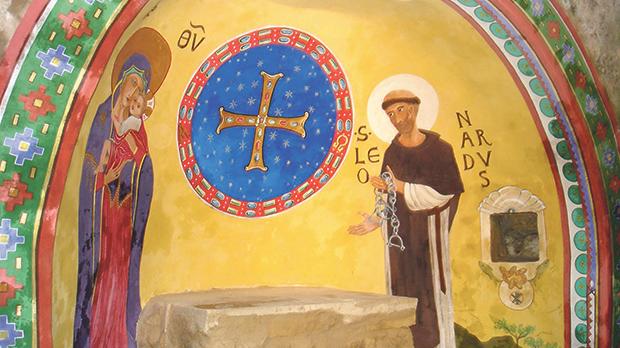 The new painting in the cylindrical apse.

The Wied Liemu cave-church could have been, as I have argued in my publications on the Maltese medieval heritage, the central nucleus of a community of hermit monks. Its most remarkable feature is a built cylindrical apse that had a painting of which only daubs of painted plaster survived. I discussed them on site with Sharon Cather, Professor of Conservation Studies at the Courtauld Institute, London, about 10 years ago and she thought them worthy of scientific investigation.

This in now no longer possible. The apse has, in the last couple of years, been scraped clean to receive a new wall-painting of St Leonard and the Virgin in sham Byzantine style, destroying in the process the precious art historical and archaeological evidence. This is a flagrant example of what ignorance, incompetence and insensitivity can do to the national heritage. Għar San Anard has been degraded and robbed of an important diagnostic potential.

The irony is that this sad intervention was presumably carried out with the best of intentions to give the cave a new cultic appeal and that those responsible are happy with what they have achieved. This heightens the tragedy of Għar San Anard.