A recent international study listed Malta as the best place on earth for Brits to retire. Patrick Cooke spoke to three Britons who made the move to see whether their Maltese dreams had come true.

Some people might be daunted by the prospect of starting over in a new country as a pensioner, but not Reg Fitzpatrick.

Having moved to Gozo from England aged 60, Mr Fitzpatrick fully agreed with the Yahoo Finance and Castle Cover study that listed the Maltese Islands as the best place for Brits to spend their twilight years.

“Gozo in particular and Malta in general has come up with everything we wished for and lots more besides,” Mr Fitzpatrick said.

He and his wife Lilian decided to leave England for the Mediterranean in 2003 after growing weary of the British lifestyle and weather.

They considered Cyprus and Gibraltar – “We wanted an English-speaking place” – before settling on Gozo and buying a villa in Xlendi in September 2005.

The former RAF serviceman found his new community in Gozo to be very similar to where he was raised in rural Ireland.

“We truly felt we had come home,” Mr Fitzpatrick said.

“I believe our move will result in us living perhaps 20 or 30 years longer due to the more relaxed lifestyle.”

The study took into account weather, property prices and taxes, healthcare, the cost of living and proximity to Britain when assessing countries. For Mr Fitzpatrick, Malta scored high in all categories and more besides.

He was particularly complimentary about the hospitality of the Maltese people: “They are warm, polite and very welcoming, with a tremendous sense of family values.”

His interest in Malta was first sparked in the early 1960s when he was stationed at RAF Debden in Essex with Joseph Buttigieg, a Maltese man who spent many hours talking about his homeland.

“I never forgot the impressions he left me with. I would certainly love to thank him for the insight,” Mr Fitzpatrick said.

Although he was concerned about being away from his two adult daughters, one visits regularly with her family and the other liked Malta so much that she moved to the island with hers.

Steve Jessel is another Briton happy with his decision to spend his retirement in Malta.

Having lived in southern France for many years, he moved to Mellieħa with his partner Heather in May 2011 after falling in love with the island on holiday.

To avoid hassle in old age, Mr Jessel, 60, decided to rent rather than buy property and he plans to sell his home in France and “enjoy living off the money”.

Like Mr Fitzpatrick, he also ranked Malta highly for cost of living and climate, though he felt the health and other government services suffered a little from bureaucracy.

“The people working there are very nice but usually they can’t answer your questions,” he laughed, adding that he had grown used to bureaucracy in France.

“The Maltese people are lovely and I would certainly recommend Malta for retirement, though I don’t want too many people to come here and spoil it,” he joked.

For Alan Spence, Malta feels much more like home than England does.

The 65-year-old Balzan resident went back to his homeland recently for the first time since moving to Malta seven years ago. “I was shocked at the price of everything in the UK. I can live comfortably in Malta with my British pension but back home I’d struggle,” he said.

Mr Spence had been holidaying in Malta since 1968 as he “always liked the people and found them very hospitable”.

He has some health problems and praised Mater Dei Hospital’s cardiac unit as being “as good as any major country in Europe”.

He also feels much safer in Malta than he does in the UK, particularly at night.

“I have spoken to several friends in England to encourage them to make the move. I’m sure they wouldn’t regret it,” he said. 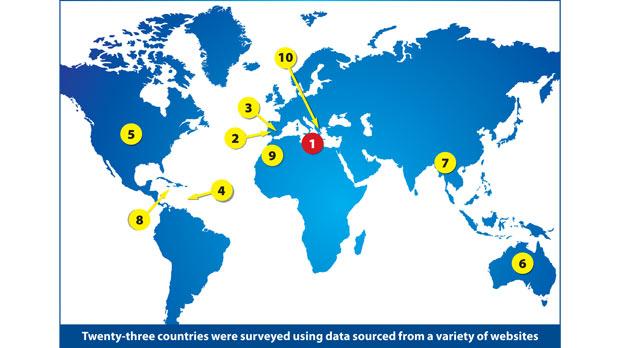