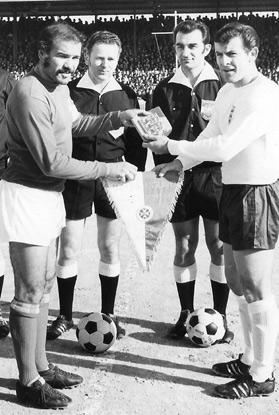 The first article in the ‘Shadows from the past’ series was published on Thursday, February 11, 1994. The series has now reached the magic 1,000 and to commemorate this milestone I selected the five biggest events in the history of Maltese football.

I am sure that most of you will agree with my choice... although others may choose to defer.

• May 13, 1900 is one of the most important dates in the annals of our game. On that day, St George’s and Floriana crossed swords for a wager at the Murina Ground in Marsa.

It was agreed that the game be played at the old Navy ground, situated somewhere below the Għammieri Farm. The match was played for a wager of £5.10s, which in those days amounted to a year’s wages.

Each team presented a list of players, each of whom had to fork out a 10s gold piece as his share of the wager.

Thousands of Maltese from all over the island made their way to Marsa on that occasion.

Many side bets were made and the atmosphere was electric.

Conditions were crude; there were no crossbars or nets and the spectators spilled on to the pitch, leaving very little space for the players to take out-balls or corners.

At the end, St George’s won 3-1 and with the wager’s money they bought a silver cup, which they appropriately named ‘The Floriana Cup’. Thus ended the first big match in Maltese football. This game went a long way towards establishing football as Malta’s national game.

• 1910 was an important year for Maltese football. It was the year in which the first ever league championship was organised.

The competition was held at the Lyceum ground in Marsa between Floriana FC, Sliema Wanderers, the University FT, the Boys Empire League of Valletta and St Joseph’s United, of Msida.

As luck would have it, Floriana and Sliema Wanderers were drawn to open the competition on February 20, 1910. The game reportedly attracted a crowd of over 5,000 spectators.

For the first quarter of an hour, everything went smoothly. Then, during an attack by Floriana, Salvu Sammut touched the ball with his hand but the referee did not see the infringement. Immediately after this incident, the same player was floored in the penalty area and this time the referee did not hesitate to whistle for a penalty against Sliema.

Ten minutes later Richardson, the Sliema right-half, let go a hard shot from well outside the penalty area. Floriana goalkeeper Pawlu Borg could only touch the ball with the tip of his fingers. It seemed to be a goal and the referee at first signalled towards the centre circle. The linesman, however, annulled the goal.

This was too much for the Sliema players to take and they left the field. The referee had no option but to abandon the match.

• It was on a crisp February afternoon in 1957, seven years before Malta became independent, that the national football team made its debut in the international arena.

It was an emotional occasion as the ‘boys in red’ trotted out for the first time on to the historic pitch of the Empire Stadium.

It was Malta’s first international match and the opponents were Austria.

A mighty roar greeted the two teams as they trooped out of their dressing-rooms led by Italian referee Sig. Orlandini. No fewer than 17,421 spectators paid to watch the match.

It was a big occasion for the Maltese players, and for the first few minutes they suffered from nerves. It was not long before Austria opened the scoring.

The crowd was stunned. The euphoria evaporated as Austria pushed for more.

Then, Wagner scored the second goal for the visitors. It seemed all over for the Maltese especially when Hammer headed in the third goal for Austria.

Then came Malta’s moment of glory. Only three minutes were left for the end of the match when Sammy Nicholl cheekily dribbled round Stotz and Englemeier before tapping the ball to Cauchi. The centre-forward kept his head and shot into the net.

A few seconds later Cini slipped the ball to Nicholl who beat Stotz before hitting in.

The final seconds of the match saw the Austrians hang on for dear life to prevent the Maltese from scoring a dramatic equaliser.

The end came, however, with the Austrians still in the lead.

• I remember quite clearly the great enthusiasm that hit the islands in the summer of 1970 when it became known that Malta had been drawn against England, Switzerland and Greece in the European Cup of Nations.

In the meantime, news that Malta would be playing against England aroused the interest of the British press, who predicted a landslide victory for the then world champions.

The Stadium’s pitch was vilified and our players described as a ‘bunch of waiters’.

The hour of truth arrived on Wednesday, February 3, 1971. For days on end the match against England was the centre of conversation.

The match was scheduled to start at 3pm but the gates were thrown open at noon. Two hours before kick-off, the ground, which at the best of times could hold some 15,000 spectators, was already packed with more than 30,000 feverish supporters.

The match has since become part of soccer history. It is common knowledge how the Maltese rose to the occasion, limiting England to a narrow 0-1 defeat.

• On February 22, 1975, Malta faced Greece at the Gżira Stadium. Once again, the Maltese played their hearts out and two fine goals by Ritchie Aquilina and Vincent ‘Maxi’ Magro gave Malta an historic victory.

It was a merited victory and one that the Maltese had been expecting for a very long time.

I still remember vividly the scenes of joy at the end of the match and the enthusiasm of the players as they were interviewed by the late Frankie Camilleri for MTV.