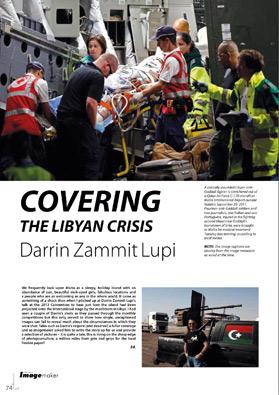 The Libyan crisis, which catapulted Malta into the eye of the storm and to the forefront of the international media, has been given a special focus in a leading UK photography magazine.

Spread over five pages, the article and photos explain the timeline of events that kicked off suddenly on February 17, 2011, and led to the Libyan dictator Colonel Gaddafi being overthrown six months later.

The pages are filled with photos capturing key moments during the crisis including the arrival of more than 2,200 Chinese nationals on the Grimaldi ferry after they were evacuated from Benghazi; medical staff surrounding a critically wounded Libyan anti-Gaddafi fighter arriving in Malta for treatment; and a Libyan airforce pilot standing next to his Mirage F1 fighter jet after defecting from the regime.

Mr Zammit Lupi’s article gives an unusual perspective to the crisis – revealing the moments of adrenaline and panic, the urgency to be at the right place at the right time and the exhaustion that kicks in after the long hours.