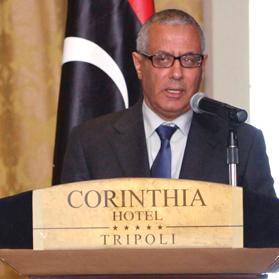 Libya’s navy opened fire after a Maltese-flagged oil tanker approached to illegally load crude at a port that has been controlled for months by armed protesters demanding more autonomy from Tripoli, officials said yesterday.

The use of force to prevent protesters at eastern ports from shipping oil to world markets independently is a major escalation in a blockade that has already slashed oil exports and revenues for the Opec member state.

Libyan officials said the tanker Baku had entered Libyan waters on Sunday in an attempt to approach the seized port of Es Sider. But the navy fired shots after the vessel refused to stop and instead turned to flee toward Malta.

“We asked them to change course toward Misurata, but then we had to open fire when they refused and started to pull away, zigzagging,” navy spokesman Emad Ayoub said in a televised news conference with other military officials.

Two years after the fall of Muammar Gaddafi, the oil standoff in eastern Libya is just one of the complex confrontations facing the weak central government, which has struggled to contain rival militias and former rebels who once fought the dictator. The state-run National Oil Corp. (NOC) said Libya had warned the owner of the vessel that approaching the port was illegal and said it would stop any tanker trying “to smuggle and steal Libyan oil illegally.”

Reuters was not able to find other companies called Royal Asset Management involved in oil trading. The NOC official did not say in which country Royal Asset Management was based. Reuters AIS Live ship tracking showed that the tanker was heading north towards Malta. Other sources stated that the ship was yesterday evening anchored to the east of Malta after it left Libyan waters.

It had been sailing around Libya since the end of December and was outside Brega port and then Zawiya before heading to Es Sider.

Protest leaders, based in Ajdabiya in the east, were not immediately available for comment to confirm they had sought to load a shipment of crude.

But the eastern protesters, who demand more regional autonomy and a greater share of oil wealth, took control of three key ports six months ago, and have repeatedly threatened to sell crude independently.

Tripoli had countered that it may use force to stop protesters shipping crude, but analysts believed it would be difficult for the group to find clients willing to risk buying oil that bypasses Libya’s central government.

“This was a clear message to the whole world, to all firms trying to load oil at seized ports,” Defence Ministry spokesman Abdelrizaq al-Shabahi said at the news conference. “Next time the navy will give a stronger, more decisive response.”

Prime Minister Ali Zeidan said last month tribal elders would hold more talks with the group led by Ibrahim Jathran, a hero from the 2011 uprising, but there has been little sign of any progress to resolve the standoff.

With Libya’s transition to democracy fragile – it still has no new constitution and its parliament is deadlocked – many former rebel fighters refuse to give up their weapons and often turn to military muscle to make demands on the government.

In the eastern region, a heavily-armed group, calling for autonomy and a greater share of oil sales, has been occupying the eastern Ras Lanuf, Es-Sider and Zuweitina ports.