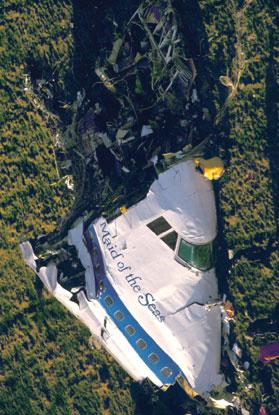 Wreckage of the doomed Pan Am 103 which exploded over Lockerbie in 1988.

The lead investigator in the Lockerbie bombing personally lobbied US authorities to pay two Maltese witnesses at least $3 million for their part in securing the conviction of Abdelbaset Al Megrahi, documents published today in The Sunday Times of Malta reveal.

The documents are salient to the case not only because they could potentially cast doubt on the motivation of star witness Tony Gauci’s crucial testimony that convicted Mr Megrahi, but also because the information about the payment, and the discussions the police entertained with the Gaucis on the compensation, were withheld from the defence.

The former Libyan secret service agent had lost his appeal against his life sentence for his role in the bombing of Pan Am 103 over the Scottish town of Lockerbie, killing 270 people in December 1988.

Mr Gauci provided key evidence at the 2001 trial because he identified a number of clothes fragments found at the crash site as having been bought from his shop in Sliema. He later identified Mr Megrahi as the person who bought those clothes.

This evidence tied together the prosecution’s thesis, that the bomb loaded on to the doomed Pan Am flight at Heathrow Airport had first left from Malta before being transferred via Frankfurt. But serious doubts were raised about Mr Gauci’s testimony over the years.

The Sunday Times of Malta is in possession of dozens of documents annexed to a damning 2007 review report which showed there could have been a miscarriage of justice. 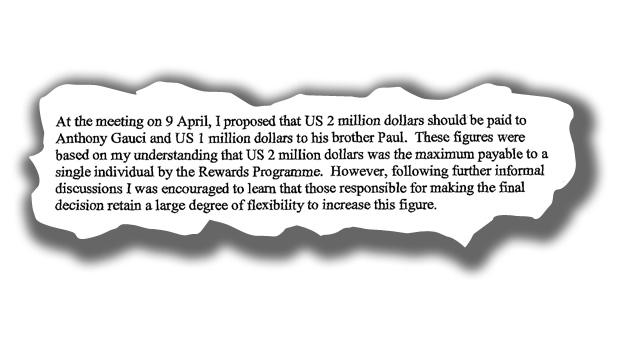 ‘He is worthy of reward’

In one of the documents, Detective Superintendent Tom McCulloch, from the Scottish Dumfries and Galloway Constabulary, wrote to the US Department of Justice on April 19, 2002, making the case for Maltese witness Tony Gauci and his brother Paul to be compensated for their role in the trial from the US Reward for Justice programme.

McCulloch wrote: “At the meeting on 9 April, I proposed that US 2 million dollars should be paid to Anthony Gauci and US 1 million dollars to his brother Paul. However, following further informal discussions I was encouraged to learn that those responsible for making the final decision retain a large degree of flexibility to increase this figure.”

The letter followed on from a meeting with the Justice Department and the FBI and another letter sent a year earlier in which Mr McCulloch first made his plea on behalf of the Gaucis.

In this first letter, he wrote: “There is little doubt that (Tony Gauci’s) evidence was the key to the conviction of Abdelbaset Ali Mohammed Al Megrahi. I therefore feel that he is a worthy of nominee for the reward...”

Mr McCulloch said he had discussed the reward with the Crown Office (the prosecution) but they would not offer an opinion on whether the Gaucis should be paid as this was deemed “improper”.

“The prosecution in Scotland cannot become involved in such an application,” Mr McCulloch wrote. 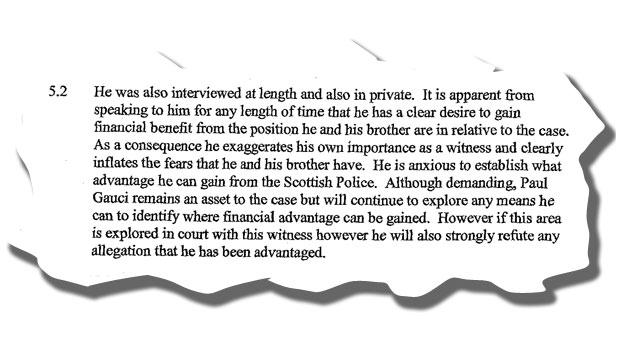 Extract from police document about the Gaucis dated June 10, 1999.

The Sunday Times of Malta tried to obtain Mr Gauci’s reaction to this latest development but he refused to comment outright, maintaining the media silence that has characterised his role in the whole affair.

The letters were referred to in a report by the Scottish Criminal Cases Review Commission (SCCRC) which in 2007 sent the case back to the High Court and cast doubt whether Mr Al Megrahi was the Lockerbie bomber after all.

The commission’s damning conclusion was partly based on the content of these letters but the documents remained secret. The SCCRC report only saw the light of day last year when it was published by the Scottish Herald and investigative journalist John Ashton, who was engaged by Megrahi’s defence team.

Scottish police officers defended their actions before the SCCRC, insisting that the Gaucis were never offered money during the investigation.

Mr Gauci himself gave evidence before the commission and stressed that he had never shown any interest in receiving payment. To sustain his point, he underlined the fact that he had turned down various offers for payment by journalists, who had been hounding him and his brother for an exclusive, over the years.

He had also turned down an offer made by an unidentified Libyan man for compensation from the Libyan regime.

However, extracts from a diary kept by Dumfries and Galloway Inspector Harry Bell give a different picture. In a note dated September 29, 1989, early into the investigation, Mr Bell noted that FBI Agent Chris Murray had told him he had “the authority to arrange unlimited money for Tony Gauci” and that he could arrange for “$10,000 immediately”.

Moreover, there are also various entries in the classified documents in which Scottish police describe Paul Gauci as being very forceful about seeking some sort of financial gain and also that he influenced his brother greatly.

“It is apparent from speaking to him for any length of time that he has a desire to gain financial benefit from the position he and his brother are in relative to the case. As a consequence he exaggerates his own importance as a witness and clearly inflates the fears that he and his brother have...”

In another document, it was also pointed out that Paul Gauci leveraged on a perceived loss of takings at the shop Mary’s House.

Paul Gauci’s testimony, which was relevant mostly because it corroborated Tony Gauci’s evidence, was never used at the trial.

It is not clear, therefore, why he was eligible for the reward programme, which awards money in exchange for information on major terrorism cases of interest to the US.

However, as Mr McCulloch pointed out in one of his letters: “...it should never be overlooked that his major contribution has been maintaining the resolve of his brother”.

In 2010, Mr Al Megrahi accused the Maltese witness of “betraying a fellow human being for money”. 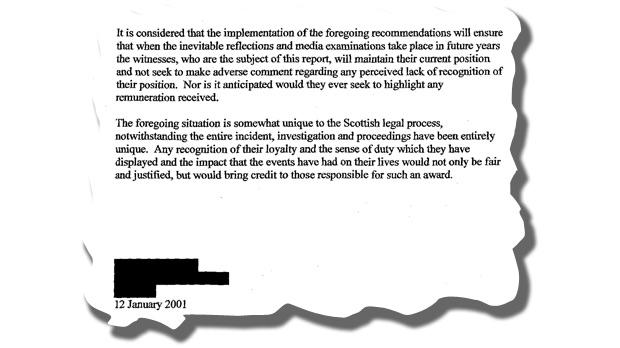 Robert Black, an emeritus professor of Scots law, who is widely credited as having been the architect of the non-jury trial at the neutral location of Camp Zeist in the Netherlands, said he found one of the documents shocking.

In this document, dated January 12, 2001, the officer, whose name was redacted, writes: “(the Gauci brothers) will maintain their current position and not seek to make adverse comment regarding any perceived lack of recognition of their position. Nor is it anticipated would they ever seek to highlight any remuneration perceived”.

Reacting to this passage, Prof. Black said: “It is no part of an investigator’s or prosecutor’s function to seek to secure that a witness maintains his current position.

“To try to influence a witness, or secure benefits for him, to achieve this result is grossly improper. The passage also recognises that it is important that the remuneration arrangement should not be ‘highlighted’. This manifests a clear, and correct, understanding that the arrangement is not one that would meet with legal or public approbation.”

The act itself of paying out money to a witness is no longer illegal under Scottish law, although it once was. However, Prof. Black insisted, it is something that should always be disclosed to the defence.

“In this case, the authorities did everything in their power to conceal it, including ‘mislaying’ Harry Bell’s diary until it was eventually unearthed by the SCCRC in the course of their investigation of the Megrahi conviction.” 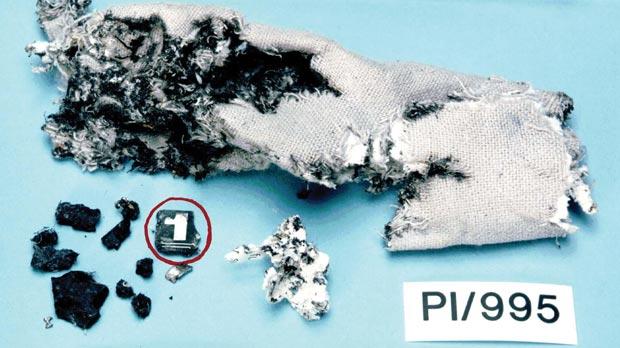 The timer fragment, circled, has also cast doubt on the Lockerbie conviction.

Journalist Joe Mifsud, who covered the Camp Zeist trials said yesterday the documents were interesting because they provided further proof a payment had been made.

“There had been several reports over the years about whether there had been a payment but it was never really confirmed,” said Dr Mifsud, who wrote a book about the Lockerbie bombing.

“However, I never found Gauci’s testimony convincing irrespective of this information. I always felt that a number of things he had stated in the trial would have collapsed had they been tested properly with an onsite inquiry.

“Some of the things he said would come apart if only the judges placed his context in their physical context in Malta – but they never did,” Dr Mifsud said.