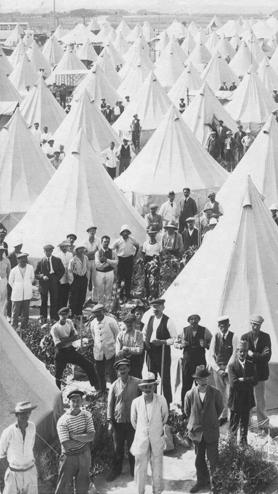 Prisoners of war pose for a photo at St Clement Fort in Malta just under a hundred years ago. To mark the centenary of the outbreak of World War I, the National Archives are publishing The Salter Album, Encounters in Malta’s Prisoner of War Camps (1914-1920), throwing light on life in the POW camps. Photo courtesy Tony Camilleri

Love was in the air between a Maltese clerk and a British Army officer working at the Verdala Prisoners of War Camp during the Great War.

However, they never said a word about their feelings for each other until they met again, 13 years after the war, and got married within three days.

Mary Tabone, from Valletta, started working as a clerk at the POW camp in 1917. During World War I, apart from serving as a hospital base, Malta also housed more than 2,500 prisoners of war, mostly German and Austrian, in various camps around the island.

Back then Ms Tabone’s appointment had caused controversy among her male competitors: jobs, they said, should not be given to women when men were the breadwinners in the family.

But she had earned her post: she had placed first in a civil servants’ examination.

Her direct manager, in charge of prisoners’ finances, was George Salter, a British Army officer who had been designated at the camp since its establishment in 1914.

In the three years that followed, Mr Salter and Ms Tabone became very good friends, but theirs was an unspoken love: he was married, with a wife in the UK.

The only show of feelings came after the very end of the Great War. No words were ever exchanged but on June 1, 1920, the day before he returned to the UK, Mr Salter gave the Maltese girl a single red rose.

Twelve years passed, during which time Mary married a Maltese-American and left for New York. However, she was unexpectedly widowed shortly afterwards.

Some time later she sent a letter to George in England, asking after him. He wrote back; he was taking care of his wife who was dying of cancer.

A regular correspondence began again and continued for many months after he became a widower. In 1933 there came a very special letter: a marriage proposal. 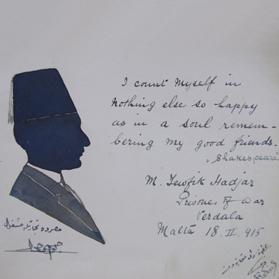 Even though she had not seen him for 13 years, Mary, now 34, did not hesitate. She resigned from her job and sailed for London. George was waiting for her at the Southampton pier. He was now 55. They exchanged vows three days later.

Although they had a child soon afterwards, their love was not destined to last.

In 1940, as London was being bombed, Mary and her daughter Marylyn fled to the United States, hoping for a speedy Allied victory so that she could reunite with her husband – who stayed behind to contribute to the war effort. But it was not to be: George Salter developed pulmonary tuberculosis and died in 1942.

When the war ended, his wife came across an autograph album which Mr Salter used to keep at the prisoners’ camp in Malta in the years between 1914 and 1920.

The album was full of inscriptions of German, Austrian, Turkish, Hungarian, Egyptian and Bulgarian prisoners. Most were military personnel, but a good number were civilian detainees. 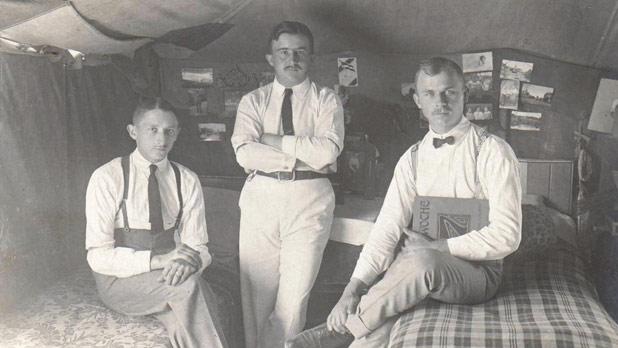 These inscriptions, together with the Salter love story, written by their daughter Marylyn, as well as articles by Giovanni Bonello, Alan Green and Stephen C. Spiteri have now been published by the National Archives of Malta with the assistance of the embassy of the Federal Republic of Germany.

The Salter Album, Encounters in Malta’s Prisoner of War Camps (1914-1920) marks the centenary of the outbreak of World War I (1914-1918) and throws light on life at the prison camps in Malta.

It will be launched on November 13 at 5.30pm at the Boys’ Secondary School in Verdala – the site of the prison camp.

During the launch, open to the general public, Marylyn Peringer will speak about her parents’ story and Professors Wolfgang Kruse and Henry Frendo will discuss the impact of the Great War on the Mediterranean.