Hands up those of you who don’t love Charlie Brown, his faithful beagle Snoopy and the rest of the Peanuts gang created by cartoonist Charles M Schulz. What, only two of you?

Well this film is not for you but it is certainly for anyone else with a fondness for the characters which first made an appearance in 1950 and have been a staple of pop culture ever since. The comic strips that graced the pages of many a newspaper – Schulz himself drew a total of 17,897 strips for the papers – going on to appear in books, on merchandise, TV specials and so much more.

The feature A Charlie Brown Christmas has been a yearly fixture on American TV since its debut in 1965 and the characters are often referenced with fondness in other pop culture universes (remember Xander doing the Snoopy dance, Buffy fans?)

What’s not to love? Schulz’s characters offered a kids’ eye-view of the world around them with humour and pathos and they soon entrenched themselves in readers’ hearts. And they remain as popular today as ever.

The idea of a Peanuts film made with 3D animation is a giant step away from the traditional – and beloved – 2D drawings. Some purists, myself included, probably recoiled somewhat at the transition. But, I am happy to report, that although the characters inevitably have the richer, bolder texture formed by the CG work that went in creating them, the film maintains the spirit of the comic strips intact.

It helps, I suppose, that the script was co-written by Schulz’s son Craig and grandson Bryan, together with Cornelius Uliano.

The film maintains the spirit of the comic strips intact

The writers, together with director Steve Martino seem to have also followed the sage adage ‘if it ain’t broke, don’t fix it’ in their approach, for the story does not take the characters in-to any new direction. Rather, it reintroduces them to us and, it must be said, that the familiarity exudes the warmth of a thick blanket, as it envelopes us and takes us down memory lane.

When Charlie Brown sets eyes upon the Little Red-Haired Girl who moves in next door he is immediately besotted. He vows to embark on a mission to befriend her; but it is much easier said than done. With the help (or hindrance) of crabby advisor Lucy Van Pelt and his coterie of friends – tomboy Peppermint Patty, the bookish Marcy, blanket-loving Linus, piano-playing Schroeder, Charlie’s sister Sally and the rest of the gang – Charlie sets out to woo his beloved, with the efforts as usual misfiring spectacularly, cementing his status as loveable loser; yet, bless him, never giving up. 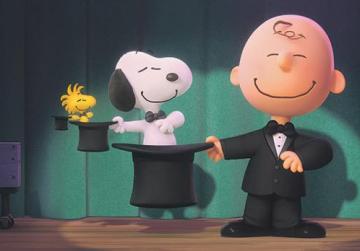 Whether mistakenly being given a school prize, kicking at that football the second after Lucy whips it from under his feet for the nth time or trying to fly a kite, he perseveres through the awkwardness and embarrassment; championing the underdog in us all.

It isn’t all Charlie Brown and the human characters, of course. Snoopy and Woodstock are both present and correct; the white and black beagle still attempting his great novel (all together now… “it was a dark and stormy night”) his inspiration leading to great flights of fancy as he imagines himself in his World War II plane, fighting his eternal nemesis, the Red Baron, leading to some moments of great adventure to counterbalance Charlie Brown’s moments of angst. Kudos to the cast giving voice to the characters – it consists in the main of an ensemble of child actors, with Broadway veteran Kristin Chenoweth also on board adding some pizazz to Fifi, Snoopy’s love interest, while interestingly recordings of the late Bill Melendez, who originally voiced Snoopy and Woodstock, were also used for this latest Peanuts venture.