Rivals BUPA Luxol and Athleta A to Z Electronics will contest the final of the Louis Borg Cup, scheduled for March 16 and 19, after ousting Royce Floriana and ReMax Siġġiewi in the semi-finals 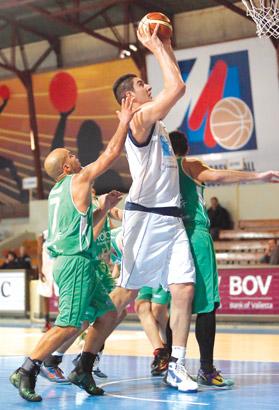 Sam Deguara pots a basket for Luxol in the first leg of their Louis Borg Cup semi-final against Floriana. Photo: Darrin Zammit Lupi

Luxol effectively secured their passage to the final in the first leg.

They dominated the opening match thanks to Samuel Degua-ra’s height and baskets by Michael Meyers Keitt.

Floriana’s difficult moment continues and, despite pivot Dirk Schembri’s return to form, they badly missed the points of Derek Elston.

The first quarter was balanced with one team then the other in front. The score was 19-all at the end of the session.

The equilibrium persisted in the opening six minutes of the second session with Luxol a point ahead, 29-28.

At this stage, Floriana became somewhat nervous and Luxol took advantage of their opponents’ slump to score 16 consecutive points for a 44-28 half-time lead.

The interval allowed Floriana to regroup as they went on to share the exchanges in the third quarter with Luxol beginning the last 10 minutes 61-46 ahead.

There was no stopping Luxol in the last quarter as they pulled further clear, 71-49.

Floriana tried to react but after hitting six consecutive points, they were unable to hold off Luxol in the closing minutes as John Tabone’s team established a comfortable 23-point lead ahead of the second leg.

Luxol opened strongly in the second leg to lead 9-2.

Gradually, Floriana raised their game to come more into the picture as the first session ended 17-10 in favour of Luxol.

Floriana maintained their momentum and also managed to draw level at 22-all.

While Deguara continued to dominate underneath the boards, Meyers Keitt was having a quiet match by his usual standards but this did not prevent Luxol from extending their lead to nine points, 50-41, before the start of the last 10 minutes.

Luxol continued to administer their advantage until the final four minutes, 58-48, when their form suddenly suffered an unexpected dip.

Floriana profited with Elston, playing much better than the previous day, helping his team to their first win of the year, 66-65.

Athleta overcame a difficult moment in the first leg to impose their play against a careless Siġġiewi who faded out after a bright start.

Siġġiewi playmakers Lee Ross and Chris Sammut lost innumerable possessions besides being poor in their shooting.

Another aspect of Siġġiewi’s defeat was their tendency to go for individual play which backfired against an aggressive and organised defence like Athleta’s.

Steve Sammut and his team-mates must learn to turn the ball around and make their opponents work in defence.

Siġġiewi coach Karl Borg surprised Athleta by starting with Marco Matijevic who responded with an excellent first half.

After a balanced opening, Siġġiewi began to pull away as Athleta squandered several possession moves, to the dismay of coach Joe Galea, and were inaccurate in their shooting.

Athleta potted the first two baskets of the second session. Siġġiewi recovered to hold a nine-point lead, 38-27, midway into the quarter.

Siġġiewi held on until the fifth minute of the third quarter, 52-48, but Athleta grew in confidence to turn the tables on their oppo-nents, going 60-57 ahead before the final session.

Hard as they tried, Siġġiewi could not close the gap as Athleta took a five-point lead into the second leg.

Athleta’s Chad Patus was given too much room by Luxol and he duly punished his opponents, nailing five three-pointers.

Some calls from the referees didn’t help Siġġiewi’s cause.

It’s hard for referees to maintain high levels of concentration when they have to officiate five to seven matches in 24 hours.

Ivo Hoeger, Siġġiewi’s towering player, suffered several fouls which went unpunished. When the officials began to signal these fouls, the match was as good as over.

Athleta dominated the first quarter to all but book their place in final as they led 35-16. Siġġiewi showed signs of improvement in the second quarter but Athleta continued to hold a slight edge to change ends 58-34 ahead.

Siġġiewi, looking more determined after the interval, defended better to cut the deficit by 12 points and start the last session 70-58 behind.

Borg’s men could have further narrowed the gap but poor passing and erratic shooting allowed Athleta to preserve their advantage.