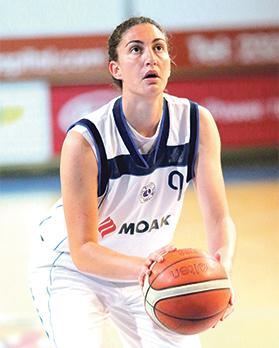 A superior performance in the third quarter was decisive in leading Caffe Moak Luxol to win the third rubber in the MAPFRE MSV Life Women’s League play-off finals and thus taking a 2-1 lead in the best of five series.

Santino Coppa’s girls are just one win away from winning the title, piling all the pressure on their rivals Gżira Athleta ahead of today’s fourth match at the Ta’ Qali Pavilion (start: 2.45pm).

Luxol set off on a good note as they raced to an early 8-2 lead through Sarah Pace and Stephanie Demartino, however Gżira Athleta had an immediate reaction as they managed to overturn the score with a Beverly Zammit trey that concluded a 7-0 run in three minutes of play.

Christina Grima and Amelia Simmons combined to help Athleta to a good start in the second quarter as a 7-2 break had Athleta enjoying their last lead in the match, 18-15.

Luxol soon clicked into gear and a seven-point run was stopped with an Athleta timeout, the only one by both teams in the first half.

The match remained evenly balanced with both teams locked at 25-all with 20 minutes of play left.

A Pace trey followed by another Demartino hoop set off Luxol on the right footing in the third quarter.

Luxol upped their offensive rhythm and registered an important 12-3 break, concluded with a Paula Ellul long distance shot, to open a double-digit lead, 42-31.

Gżira Athleta were now facing an uphill task as they could not find consistent offfensive cadence and when Luxol hit them with another decisive break, this time 10-2, half way in the final quarter, the game was done and dusted.