The Migrant Offshore Aid Station will be facing major challenges as it ventures on its second rescue mission off Libya this year. But there’s no stopping the young NGO from saving migrants in distress, as founder Chris Catrambone and new recruit, the warzone icon Robert Young Pelton explain. 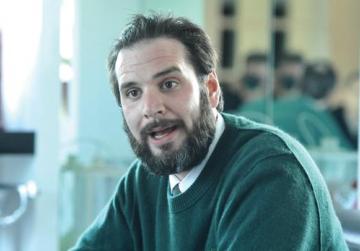 When entrepreneurs Chris and Regina Catrambone launched the world’s first private migrant rescue mission from Malta last year many believed it was a recipe for failure. Questions were asked why the American-Italian couple would inject more than €8 million of their own money into buying a boat and set up an operation to save migrants.

Others felt it was just a lost cause, and that they would fail to make any difference with just one boat. But in 2015 they are back with renewed confidence after their 60-day mission last year managed to rescue 3,000 people.

And they also have a greater sense of urgency. Last year MOAS worked alongside the unprecedented Italian-funded rescue mission Mare Nostrum, which was shut down in November.

Its replacement, the EU-funded Triton mission widely criticised as ineffective, operates just 30 miles off the Italian coast, which means that migrants’ vessels could potentially face danger before they reach the area being patrolled.

All this is happening as unprecedented numbers of migrants are believed to flee the North African coast this year as a result of the deteriorating security situation in Libya.

Mr Catrambone explains that the NGO’s vessel, the 43-metre Phoenix is being modified at a shipyard to cater better for needs of the operation. More bunks are being included, for instance. But the NGO is also gearing itself up for the challenge with new expertise, having managed to secure the services of world-renowned documentary maker, journalist, author, and expert on conflict zones, Robert Young Pelton.

Mr Catrambone had been chasing him ever since the idea to set up MOAS first started germinating in his head some three years ago.

“I was always busy with something. He would call me at the most bizarre hours, discussing his plans and I would tell him I’m heading for South Sudan or Afghanistan. But in the end, I realised that I had to help him because he put his money where his mouth was and made it work. I thought to myself, this is at the point where it can go from a good idea to an institution,” Mr Pelton says. 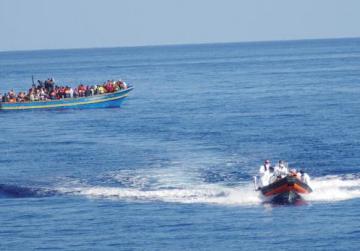 In fact, the interview takes place on the cusp of a potentially huge partnership deal that MOAS is negotiating with a major medical organisation.

“This was always our vision. As the founders, we never wanted to be the centrepiece, we always thought of MOAS as a tool that could be shared with others,” he argues.

Mr Pelton points out: “Strategically, they want to change the paradigm. They see the back and forth of Frontex and the increase of migrants. And like us, they find it unacceptable.” 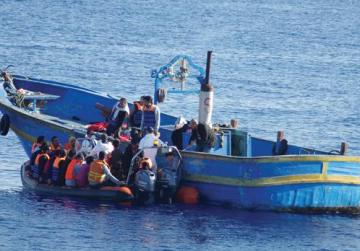 The vision has moved other private donors to come forward with significant donations or offers to fund the cost of fuel, for instance. Though it is still not enough to ensure the vessel will be able to operate the vessel’s two camera drones – which may come in even more useful given the growing risks out at sea from armed smugglers – they have secured the money for a six-month operation starting in May. And the proper fundraising has not even started.

Mr Catrambone argues that MOAS is not in the business of telling governments what they should do. But while the “EU wrestles with this issue”, people are dying out at sea. 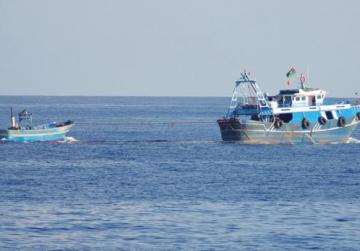 From above: Rescuers circle the migrants’ boat. They are transferred to a dinghy. Libyan smugglers on-board a vessel carrying the post-revolution flag tow back the wooden boat from which migrants had just been rescued by crew from the Phoenix. The incident was reported to Italian authorities, which coordinated the rescue. Photos: MOAS

The problem with the current Frontex mission is that it is not actually a search and rescue mission but a border patrol operation.

“So technically,” Mr Pelton argues, “they are supposed to prevent migrants from coming. But there’s a contradiction because if a child is drowning, you cannot say, that’s one less migrant to worry about. You kick into action.

“So there’s this duality of morality, where an angry middle-aged person is saying get those people out of here, they are stealing my job, but then mariners watching people drowning cannot just sail by.”

This schizophrenic approach is translating itself into an unsustainable situation out at sea because Triton’s vessels are not located where the migrants are drowning.

They have no choice but to scramble merchant vessels that happen to be closer to the action.

Such merchant vessels are not designed for search and rescue. They are slow, and even slower to come to a halt. Moreover, they usually have small crews of say 12 people, who cannot cope with a rescue operation involving 300 people, for instance.

And there is a huge economic cost to this too, Mr Catrambone points out, wearing his entrepreneurial hat. With each diversion costing shipping companies an estimated €50,000, it means that last year’s 600 such diversions cost the industry an estimated €30 million.

“And that is with Mare Nostrum around. You can just begin to imagine what is going to happen this year,” he points out, arguing that the situation would be much better managed if that money were invested in a proper rescue operation with the adequate assets.

The absence of Mare Nostrum will also have implications for the Phoenix which will be forced to waste precious time ferrying rescued migrants all the way to Sicily rather than have them transferred on to an Italian navy out at sea.

Beyond Mare Nostrum, however, the crew of the Phoenix this year will also be facing a growing risk factor patrolling the seas off the Libyan coast.

There is increasing concern with the threat posed by terrorist groups such as Islamic State which have established a franchise in certain parts of Libya and by emboldened smugglers who a few weeks ago threatened an Italian coastguard vessel to gain possession of a vessel from which migrants had just been rescued.

He would call me at the most bizarre hours, discussing his plans and I would tell him I’m heading for South Sudan or Afghanistan

In this sense, Mr Pelton’s help could not have been timelier. With experience in more than 40 conflict zones in which he built a reputation for being able to gain unprecedented access to terrorist organisations and insurgent groups like Al-Qaeda and the Taliban, he brings to MOAS invaluable security insight at a time when the temperature is rising to unprecedented levels in Libya.

The threat is there. However, he is quick to pour cold water on some of the hysteria surrounding the idea that Isis terrorists could hide among migrants and invade Europe with the sort of vessels used by migrants.

“At a tactical level, the methodology of smuggling people against moving armed groups is dramatically different. People in these boats are actually jammed so tight they know they are going to sink eventually, whereas if someone wanted to do a military operation, they would be four, five, six people at the most, like pirates. They would have to be evenly spaced so they can move their weapons,” he points out.

Moreover, as has been the prevailing view of mainstream European security analysts, he believes that using the smuggling route to send terrorists doesn’t make sense given how risky and long drawn the process is.

“If migrants are crossing for terrorism purposes, it’s really a lousy way of doing it,” he says.

Moreover, Mr Catrambone reveals that the Phoenix crew had already come across smugglers who towed back a vessel from which they had just rescued migrants last year.

“We took pictures of it and reported them to the Italian authorities. This is a business for them and that boat represents money so they are going to do their best to recover it. I think the incident with the coastguard was more a case of them posturing. The risk is there, obviously, but so far we have not come across a show stopper,” he says.

With the media attention that the MOAS mission has been attracting, the organisation is hoping to be able to train a spotlight on the search and rescue crisis of the Mediterranean like never before, and by doing so they hope to humanise the problem.

“From the experience of last year I can tell you that the people we rescued were lawyers, doctors, women, children, certainly nobody suspicious. In fact, the mission changed the discourse on the boat itself.

The people we rescued were lawyers, doctors, women, children... certainly nobody suspicious

“When we were out there, there were a couple of the mariners who were sceptical but in that first rescue, one of the first passengers on the boat was a child that could have very easily been one of theirs. You see these children protected with pool floats and inflatable armbands. Those are the sort of people that we picked up,” Mr Catrambone points out.

He also gives a personal perspective on the rescue process which perhaps helps explain why he’s so passionate about the project which also includes the former commander of the Armed Forces, Brigadier Martin Xuereb.

“When I was a kid and I was in the Comal River in Texas and I got sucked under a current and I was going to die I remember a hand reached out and grabbed me. It felt like it was the hand of God or something but it was a kid about my age who saw me and reached out.

“That feeling of being rescued is a very powerful feeling. The people we’ve rescued realise that if it weren’t for us, they might have drowned and you can see this. So when you apply this to the terrorists, you’ve got to ask the question, does it make sense for them to risk their lives in this way?”

Who is Robert Young Pelton? 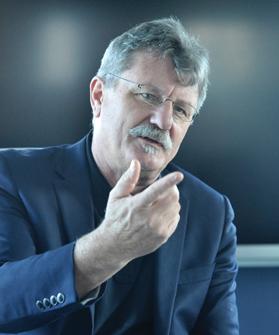 The American/Canadian is an adventurer, author, journalist and documentary filmmaker. He moved into broadcast journalism after a career in marketing where he was involved directly with Apple founder Steve Jobs on the launch of Lisa and Macintosh.

In his mid-30s he moved on to conflict reporting, which itself developed from his passion for visiting inaccessible places and people.

He quickly built a reputation for being able to gain unprecedented access to military figures, terrorist groups and insurgents like Al-Qaeda and the Taliban. He reported from more than 40 conflict zones and reported on conflicts such as the Battle of Qala-i-Jangi in Afghanistan, the Battle of Grozny in Chechnya, the rebel campaign to take Monrovia in Liberia and the siege on Villa Somalia in Mogadishu.

He survived an assassination attempt in Uganda, and spent time with the Taliban and the Northern Alliance as well as the CIA during the hunt for Bin Laden.

Among other books, he authored the best-selling survival and political guide The World’s Most Dangerous Places, and hosted a Discovery Travel Channel series by the same name between 1998 and 2003.